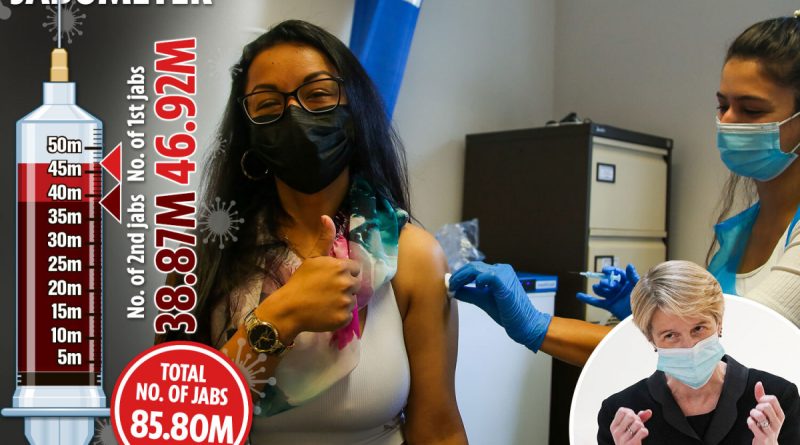 
YOUNG adults were last night urged to get double jabbed as soon as possible after it emerged a fifth of seriously ill Covid patients were under 35.

Around 1,000 aged between 18 and 35 were described as being “really unwell” in hospitals across the country.

The number of youngsters being admitted was four times higher than the peak last winter, according to new NHS England chief executive Amanda Pritchard.

She pleaded with young adults to get jabbed to stem the tide. She said: “The best way they can protect themselves absolutely is to get that vaccine if they haven’t already.”

She spoke out after an anti-vaxxer nightclub boss died of Covid after mocking the jab online.

Just weeks later, he fell ill with the virus and died in hospital. His distraught family yesterday pleaded with other sceptics to put their doubts aside and get vaccinated.

Pal Steve Wignall said: “Despite their terrible loss, they would like it to be known that they’re encouraging everyone to please get vaccinated because they don’t want others to suffer as they are now.”

David, of Catterick Garrison, North Yorks, had put up hundreds of messages criticising the vaccine, the Government, the media and pharmaceutical companies.

In one Facebook post, he said: “I am still not getting this experimental vaccine until more information is available on long term effects.”

He died on Monday despite being fit before he fell ill and having no underlying health conditions.

Meanwhile, the partner of a Cambridge University graduate who also died of Covid after refusing the vaccine said he had made a “terrible mistake”.

Les Lawrenson, 58, of Bournemouth, urged his family to snub the jab because it had not been tested properly.

After his death, his partner Amanda Mitchell, 56, said: “It was a daily thing that he said to us, ‘You don’t need to have it, you’ll be fine, just be careful’.

“He said to me, ‘It’s a gene thing, an experimental thing. You’re putting something in your body that hasn’t been thoroughly tested’.

“Les was highly educated so if he told me something, I tended to believe it. I feel incredibly foolish. Les died unnecessarily.”

Her daughter Carla Hodges, 35, added: “Leslie was so brainwashed by the stuff that he was seeing on YouTube and social media.

“He said, ‘A lot of people will die more from having the vaccine than getting Covid’.”

Around 30 per cent of adults aged 18 to 29 have yet to get a first dose — and they currently account for the majority of infections. About 2.6million that age remain unvaccinated.

The Government is on a drive to persuade the young.

Nightclub Heaven will hold a vaccine clinic this weekend. The London venue, which has hosted A-list stars including Lady Gaga and Miley Cyrus, will offer Pfizer and AstraZeneca jabs on Sunday.

Food delivery and taxi-hailing companies have also been enlisted to offer discounts for jabbed customers.

From September, people will have to be double-jabbed to get into nightclubs and large events.

Health Secretary Sajid Javid urged people to take advantage of the discounts, saying: “The lifesaving vaccines not only protect you, your loved ones and your community, but they are helping to bring us back together by allowing you to get back to doing the things you’ve missed.”

Vaccines minister Nadhim Zahawi added: “Please get your jabs as soon as you can — and grab a bargain.”