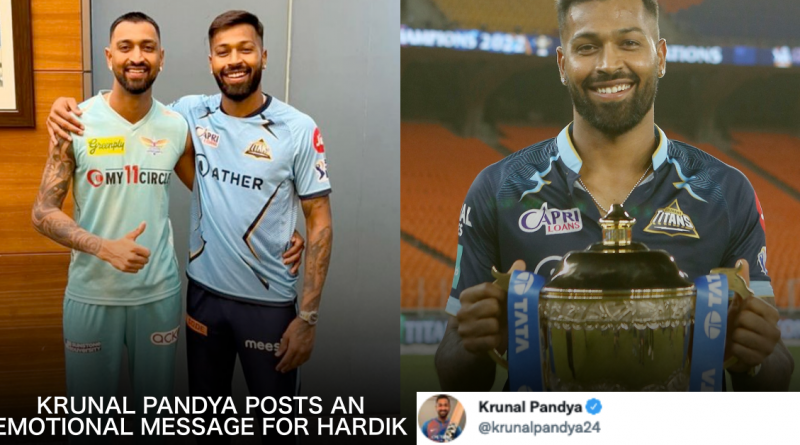 
Krunal Pandya penned a heartfelt note for brother Hardik Pandya who has been the toast of the country this far after he led the Gujarat Titans (GT) to the IPL 2022 title after defeating Rajasthan Royals (RR) in the Indian Premier League 15 final on May 29 in Ahmedabad.

This IPL 2022 saw the brothers playing for different teams as Krunal Pandya turned out for Lucknow Super Giants (LSG), after he was not retained by MI franchise before the IPL 2022 auction.

This IPL 2022 was Hardik Pandya’s comeback to competitive cricket after a long sabbatical which saw him last donning the Indian jersey for the T20 World Cup 2021 in UAE. His inability to bowl during the tournament was cited as one of the reasons for India not qualifying for the semis. This was also one of the reasons why he was let go by the Mumbai Indians franchise after spending 7 years with them.

This led to Hardik Pandya taking time off for getting back to peak fitness and he was picked by Gujarat Titans (GT) before the IPL 2022 auction and much to the surprise of everyone was named captain of the team as well.

Many doubted his ability to lead a team at this level, without prior experience, but he slew his critics as GT won 10 matches in the league game, was the first team to qualify for the playoffs, and then beat RR in Qualifier 1 to make it into the final in Ahmedabad.

“People Had Written You Off”: Krunal Pandya Writes A Message For Brother Hardik

Hardik not only rose to the occasion, he led from the front, scoring 34 runs and picking 3/17 in the final, to help GT become only the second team to win the IPL trophy in their debut season. He was also named the Player of the Final, joining his brother Krunal Pandya, who was given the same award in IPL 2017 final.

He posted: “People had written you off but you keep writing history. Wish I was there when more than a lakh people were cheering your name. @hardikpandya7. My bro Only you know the amount of hard work that’s gone behind this success of yours – early mornings, countless hours of training, discipline and mental strength. And to see you lift the trophy is the fruits of your hard work You deserve it all and so much more.”

People had written you off but you keep writing history. Wish I was there when more than a lakh people were cheering your name. ❤️ @hardikpandya7 pic.twitter.com/0zDjRIVXuz