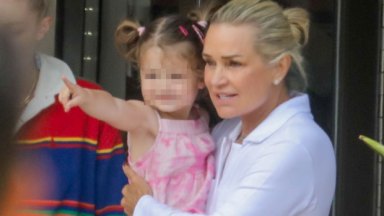 
A supermodel family affair! Yolanda Hadid enjoyed a special day hanging out with her two gorgeous daughters, Gigi and Bella Hadid, and her 2-year-old granddaughter Khai. The adorable tot, who was welcomed by Gigi and her ex-boyfriend Zayn Malik in 2020, was all smiles as Yolanda held her in her arms during a lunch date in Malibu on Friday, August 19.

The former ‘RHOBH’ star looked chic in an all-white ensemble with her trademark blonde locks pulled back in a messy bun. Gigi rocked a colorful striped shirt and shorts combo, a set of box-fresh sneakers and an oversized backpack. Bella, meanwhile, dared to impress in a light brown sweater dress, paired with black leather cowboy boots and a simple crocheted hand bag.

As fans would know, Yolanda is certainly soaking up the time she gets to spend with her adorable granddaughter after a bit of a dramatic falling out with Khai’s father Zayn. Gigi and the singer broke up in October after Zayn allegedly shoved Yolanda during an argument. The former One Direction member denied that he’d ever “struck” Yolanda in a statement after the news came out. However, Zayn was charged with four counts of harassment. He pleaded no contest to the charges and received 90 days of probation.

In more uplifting news, Gigi and Zayn are becoming co-parenting champs after their split. A source EXCLUSIVELY revealed to HollywoodLife that Gigi planned on “maintaining an amicable relationship for the sake of their baby.” at the time. “Gigi has an incredibly close bond with her own father, and could never imagine taking that away from the daughter they share together,” the insider explained.

Gigi and Zayn were first romantically linked in 2015 and dated on and off for the next six years. In 2020, the pair announced they were pregnant and gave birth to Khai in September. “The love I feel for this tiny human is beyond my understanding,” Zayn wrote on his social media at the time. “Grateful to know her, proud to call her mine, & thankful for the life we will have together.”