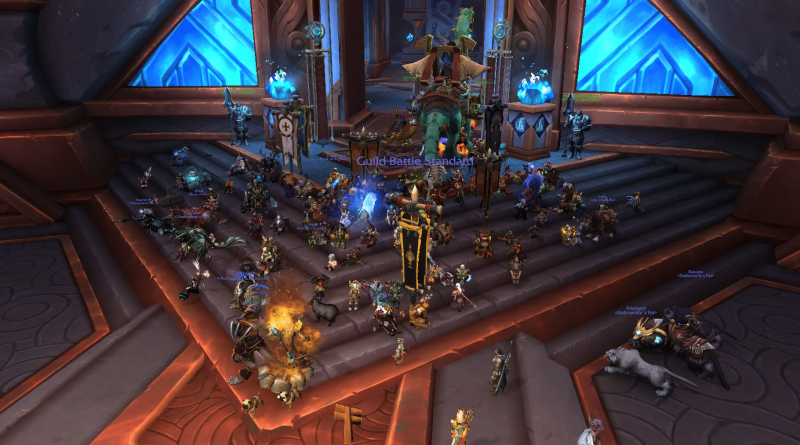 World of Warcraft players have been holding an in-game protest against Activision Blizzard.

The gaming publisher is being taken to court by California’s Department of Fair Employment and Housing for unfair treatment of women in its “frat boy culture”.

A two year investigation by the department has led to the lawsuit, which alleges that Activision Blizzard repeatedly discriminated against women employees and held them to a different standard, with abuse and harassment rife within the company.

To protest, hundreds of World of Warcraft players have gathered in the social hub of Oribos.

Organised by guild Fence Macabre that runs on the Wyrmrest Accord and Moon Guard servers, the group is additionally running a fundraiser for the charity Black Girls Code that’s dedicated to teaching young girls about coding and technology.

“It’s never an easy decision to leave such a big emotional investment behind. Most of the people here have cancelled their sub. We wanted to do an in-game protest as it would allow people from all over to sit and join with us. Since we still have the game time, we might as well try to do something with it.”

She added: “In saying that, it is an emotional loss, a lot of people in our extended communities are struggling, especially people who are also marginalized who have been able to find others like themselves and cultivate a sense of belonging.

“As a queer indigenous person, I definitely feel it. While I have external real-life support systems and resources, finding those communities in a shared hobby is especially meaningful.”

Speaking further to PC Gamer, Gray mentions the poor use of indigenous stereotypes in World of Warcraft.

“Being Native Hawaiian, and having already seen how Blizzard handles writing Indigenous and other PoC coded storylines, I wish I could say my perception had been drastically changed, but this seems to be really getting to the heart of why they have failed to write these stories and concepts well,” she said.

“The way Blizzard codes “monstrous” races with stereotypical PoC traits as though cherrypicking from multiple real-world heritages to effectively establish them as the barbaric “other” in the game is also a problem.”

Since news of the lawsuit broke, the social accounts of many Activision Blizzard games appear to have gone dark, with no new posts.

The email was obtained by Bloomberg reporter Jason Schreier.

Blizzard president J. Allen Brack sent out an email to staff last night addressing the allegations from this week’s explosive lawsuit, calling them “extremely troubling” and saying that he’d be “meeting with many of you to answer questions and discuss how we can move forward.” pic.twitter.com/NsMV6CNdTE

Bungie, the developer behind Destiny, has also released a Twitter thread about Activision Blizzard – their former publisher.

“Bungie is built on empowering our people no matter who they are, where they are from, or how they identify,” it reads.

“While the accounts in this week’s news are difficult to read, we hope they will lead to justice, awareness, and accountability.”

Bungie is built on empowering our people no matter who they are, where they are from, or how they identify.

We have a responsibility to acknowledge, reflect, and do what we can to push back on a persistent culture of harassment, abuse, and inequality that exists in our industry.