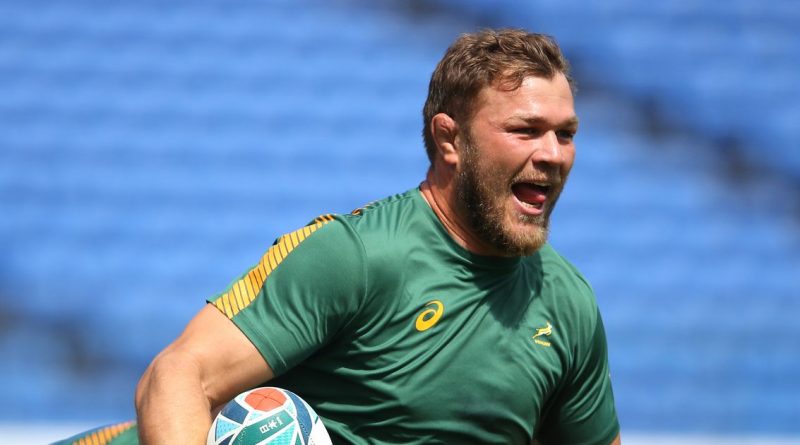 Springboks star Duane Vermeulen was expected to miss the British and Irish Lions series following ankle surgery, but the juggernaut could feature in Saturday’s third test following a swift recovery

South Africa are already on a high after pulling level in their series against the British and Irish Lions, but the hosts have been boosted further following news Duane Vermeulen is back in training.

The two teams go into Saturday’s deciding fixture with one win apiece after the Springboks rampaged late to emerge as 27-9 victors in a controversial second Test.

With momentum already running in their favour, South Africa stand to benefit greatly should Vermeulen be deemed fit in time for the final showdown at Cape Town Stadium.

He joined the national team’s training camp in June but was soon forced to undergo surgery on an ankle injury, which was expected to keep him sidelined for the entire series.

Duane Vermeulen has recovered from ankle surgery sooner than expected
(

Springboks head coach Jacques Nienaber revealed after Saturday’s win that Vermeulen was poised to rejoin the squad, although his place in the third Test squad is still not assured.

“Duane will join us on Sunday and will be medically assessed as soon as possible,” he said.

“We will never risk a player who is not 100 per cent fit but he brings experience to the squad and it will be great to have him with us.”

The 35-year-old was named man of the match when South Africa beat England 32-12 to lift the 2019 Rugby World Cup, and his absence at No. 8 has been a big blow for the hosts.

Kwagga Smith started the first Test at the base of the pack but failed to impress as South Africa succumbed to their guests 22-17.

Nienaber promoted Jasper Wiese to the starting role for his first international start in the second match, but it’s now possible the more senior Vermeulen will take over.

Vermeulen captained the Blue Bulls to victory over the Sharks in January’s Currie Cup final, and provincial coach Jake White was uncertain as to whether the 6’4” brute would be back for this weekend.

South Africa’s physicality—especially among their forwards—has proved a crucial battle ground this summer, and Vermeulen is among the most imposing players at their disposal.

Vermeulen could bring some much-needed experience at No. 8 for South Africa
(

The Boks would be understandably elated to have such a decorated asset among their options, although Nienaber may hold some reservations after an absence of almost two months.

The South Africa boss is also sweating on the fitness of star back-rower Pieter-Steph du Toit after he was forced off early on during Saturday’s victory over the Lions.

Du Toit suffered a late hit from winger Duhan van der Merwe—who was sent to the sin bin for his offence—and was forced to withdrew after 22 minutes.

South Africa will learn more about their flanker’s condition on Monday, with Nienaber expected to name his line-up for the third and final Test the following day.