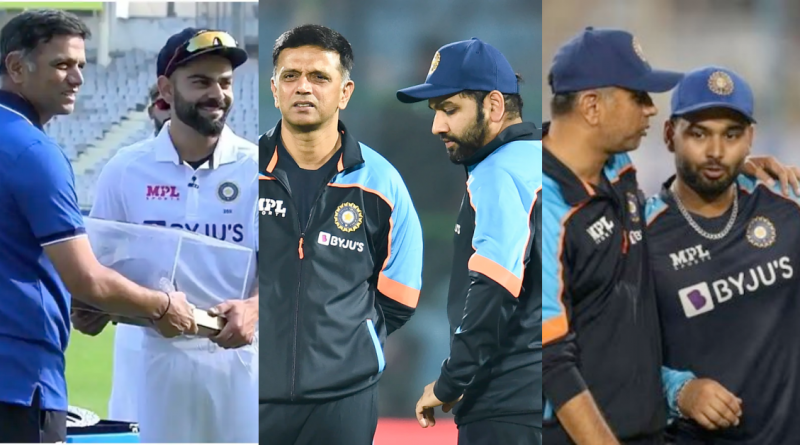 
After taking over as head coach of the senior national team from Ravi Shastri, India head coach Rahul Dravid claimed he did not expect to work with as many as six different leaders early in his tenure.

Dravid said it’s been a nice challenge for him, especially when it comes to workload management in the Covid-19 times, ahead of the 5th and last T20I of the ongoing series against South Africa.

Last year, during a home series against New Zealand, Rahul Dravid began his tenure as head coach with Rohit Sharma at the helm. Former India captain Virat Kohli too worked with him. The likes of KL Rahul, Rishabh Pant, and Shikhar Dhawan have all worked with him.

It Has Been Challenging To Work With Different Captains But It Has Been Fun As Well: Rahul Dravid

“It’s been exciting. but it’s been challenging as well. 6 captains in the last 8 months which wasn’t the plan when I started out. But yeah, I think, it’s just the nature of the Covid-19 pandemic and the nature of the number of games we’re playing.

“I have worked with quite a few captains which in itself is challenging but great fun. It’s an opportunity to create more leaders in the group as well. I think, as a group, we are learning. We need to get better, we are trying out and giving opportunities to a lot of people which is great,” Dravid told Star Sports on Sunday.

Dravid also talked about the South Africa series earlier this year and said that it was disappointing to lose that series.

“If I look back at the last 8 months, South Africa was a little bit of a disappointment. In the Test series, we were 1-0 up there but we failed to win the series after that. It was a disappointment, especially with the World Test Championship cycle. But I think our white-ball cricket has been good. We were able to come back from there and get on a bit of a roll in the T20I games.

Dravid will join the Indian Test squad for the one-off Test against England. The Test between India and England will begin in Birmingham on July 1.

Also Read: Wriddhiman Saha In Talks With Tripura To Take Up Player-Cum-Mentor Role