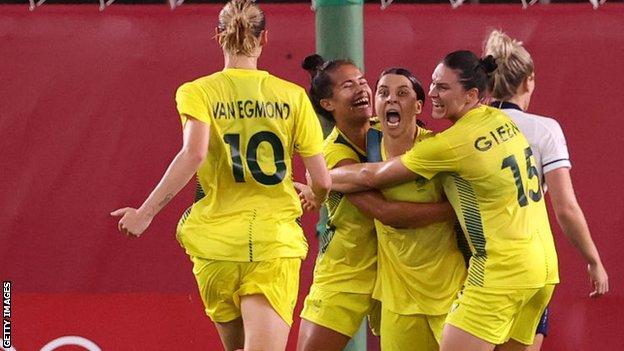 Hege Riise’s side were rocked when Kerr rose above GB captain Steph Houghton to head in a fourth for Australia, but White responded to set up a nail-biting finale.

GB went in search of an equaliser but could not find a response.

Australia will face the winners of Sweden-Japan in Monday’s semi-finals.

Riise’s rollercoaster of emotions on the touchline were felt by those watching from home as GB went from elation to heartbreak within minutes.

The Norwegian was on her feet, kicking the ball into the net with White when the Manchester City striker pounced on a loose ball to smash in her second in normal time to put GB 2-1 up.

White sprinted away, roaring passionately at her team-mates as GB celebrated wildly on the touchline.

But with a first Olympic semi-final moments away, Kerr showed composure in the box before firing in a devastating equaliser, taking the game to extra time.

Riise was biting her nails and pacing on the sidelines as GB regrouped – Keira Walsh’s ferocious strike was tipped over the bar before White was denied from close range in extra time.

Kerr rose higher than Houghton to nod in a fourth and, despite White’s heroic efforts, it was not enough to get GB back into the game.