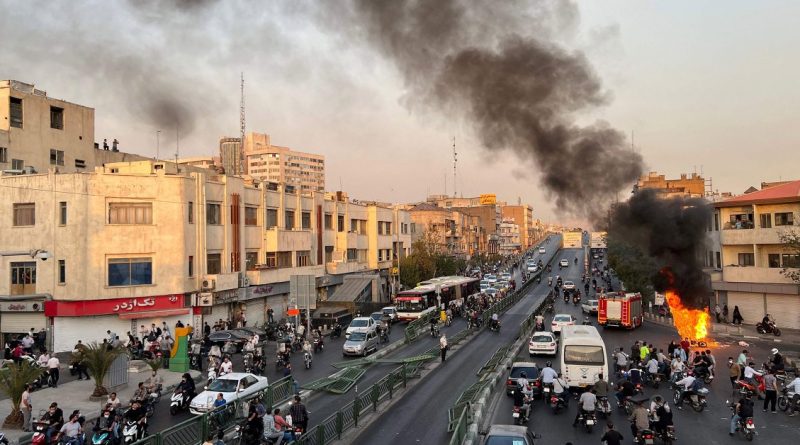 
Evidence is accumulating that protests in Iran, now in their fourth week, may be seriously undermining the regime. While government forces continued to knock heads in the streets, the head of the Judiciary on Monday publicly spoke of “mistakes…weaknesses and failures” by a government that has never previously acknowledged anything remotely resembling fault. “Citizens or political groups should know that we have an ear for protests and criticism and that we are ready for dialogue,” said Gholam Hossein Mohseni Ejei, a former intelligence minister regarded as among the hardest of Iran’s hardliners; he once bit a journalist.

The striking change in tone came after a sobering weekend for the country’s authoritarian rulers. The protests are far from the biggest the Iran has seen – in 2009, hundreds of thousands marched to protest a stolen election. But the current unrest appears to have penetrated the bedrock of the Islamic Republic. Over the weekend, protests took place in Tehran neighborhoods long regarded as regime strongholds, including Naziabad, Fallah, and Valiasar. Historically, those districts have produced Basiji, the state-sponsored paramilitary who enjoy state patronage and pour into the streets to break up protests. (In 2009, middle-class protesters chanted, “Basiji go home, no free meal today”). Now the same neighborhoods are producing the kind of unrest the Basiji would typically be called to extinguish. In one ambiguous but much-discussed snippet of footage, uniformed police are seen not confronting the protesters but walking beside them.

“They’re not typical areas for protest,” notes Tara Sepehri Far, the Iran researcher for Human Rights Watch. “The crack has gotten much much closer to them,” she said, of the regime, “much closer to their base.”

“I’m not sure you can call it their base now, because a base has to be loyal to you,” adds Maziar Bahari, editor of the London-based IranWire. On Tuesday, the news site reported that security forces are plagued by low morale, defections, and private fears the armed forces may collapse. The site quoted an unnamed former security official as saying: “The question of many in the military and security forces is: ‘For what? For this government that’s corrupt from top to bottom?”

On Saturday night, the government’s slipping control was broadcast nationwide. Activists briefly commandeered state television during the main newscast, interrupting a report on Supreme Leader Ayatollah Ali Khamenei, with a placard depicting Khamenei in crosshairs and the words “The Blood of Our Youths Is on Your Hands.” The placard also featured a photo of Mahsa Amini, the 22-year-old whose death in the custody of “morality police” sparked the protest, as well of as the images of three young women killed while protesting her death. “Join us and rise up,” the card read. The soundtrack was the protest chant, “women, life, freedom.”

After a few seconds the screen returned to a live shot of an anchorman looking understandably hapless. The IRIB, or Islamic Republic of Iran Broadcasting, is the regime’s main propaganda arm, and directly controlled by Khamenei. Press reports described the episode as a “hack,” but an IRIB spokesman pointed out that, since the broadcast was not online, it was actually an act of “infiltration” carried out from within the organization.

“The Islamic Republic’s collapse—while not inevitable—is no longer inconceivable,” Karim Sadjadpour, an analyst for the Carnegie Endowment, tells TIME. “It will eventually go the way of the Soviet Union, but the timing of when it happens and what comes next is entirely unpredictable. The question is whether the regime can crush these protests without further enflaming them and while keeping their security forces intact. They’ve succeeded in doing so in every mass uprising up until now, but the geographic scope and intensity of these protests have been unprecedented.”

“Street protests may be contained with repression,” Sadjadpour added. “But if large and sustained strikes begin among petrochemical workers and the bazaar, things could start to unravel quickly.”

In fact, as Ejei spoke on Monday, oil workers at state-owned petroleum facilities in two provinces called a strike in support of the protests, marching and chanting, “Death to the dictator” and “Don’t be afraid, we stand together.” The next day, the strike reportedly spread to a refinery at Abadan. Petroleum forms the basis of Iran’s economy.

The regime appeared to be under assault from every side. When President Ebrahim Raisi ventured on Saturday to Al-Zahra University, an all-women’s school, the hand-picked audience listened respectfully while hundreds of students outside the hall chanted, “Get lost, Raisi.”

Videos emerging from the country toggle between horror and heart-lifting. In one, a mother calmly describes the condition of her daughter’s corpse after its release by security forces: “Her teeth were crushed and there was a big cavity at the back of her skull.” Another documents schoolgirls chasing away the middle-aged men dispatched to tell them to put back on their headscarves.

The regime appears uncertain of its footing. In putting down previous protests, authorities played successfully on Iranians’ sense of nationalism, nursing latent fears that unrest might serve as a cover for separatist movements among the country’s ethnic Kurdish, Baluchi, and Arab minorities. Amini’s death appeared to transcend all that. She was an ethnic Kurd who had been visiting Tehran when she was abducted and allegedly beaten for “inappropriate hijab,” or religious dress. The first protests were outside the hospital where she was declared dead on Sept. 16, then in her hometown. But within days they had erupted in more than 80 cities across the country — including Qom, the holy city. The Oslo-based group Iran Human Rights says it had documented 185 protester deaths in 17 of Iran’s 31 provinces.

The authorities have concentrated forces on the Kurdish region — firing artillery across the border into opposition camps in Kurdish territory inside Iraq, and, on Monday night, launching a brutal sweep of the streets in Kurdish cities inside Iran. But so far the protesters appear to be united in opposition to a regime that over four decades in power has grown more isolated and oppressive, especially toward women. Days before Amini died, a woman in the Iranian Kurdish city of Marivan leapt to her death from her own apartment to escape being raped by a neighbor. After local women protested systemic violence against women, Iranian Vice President for Women and Family Affairs Ensieh Khazali praised the victim for choosing to protect her honor over her life.

At the other end of the country of 84 million, regime forces killed some 90 people in the ethnic Baluch city of Zahedan, where a protest for Amini blended with a local outrage: the rape of a 15-year-old by a local police official. Protesters in Tehran claimed the victims as martyrs.

Read More: The Protests in Iran Have Shaken the Islamic Republic to Its Core

“The solidarity beyond ethnic lines still holds, largely,” says Sepehri Far of Human Rights Watch. “The protests, as I understand it, are widespread. They’re not huge in numbers. If you remember in 2009, it was very concentrated in a political movement. This one feels very scattered, and across ethnic divide in a way that is, again, different. There’s a new connectivity.”

No one claims to know where events are headed. In a Sept. 28 interview with TIME, the internationally renowned human-rights attorney Nasrin Sotoudeh spoke of “a very real possibility of regime change.” Sociologist Asef Beyat, author of Life as Politics: How Ordinary People Change the Middle East, cautiously observed in an interview with the Iranian daily Etemad that the spontaneous nationwide outrage over Amani’s death bore parallels with the death of Mohamed Bouazizi, the Tunisian street vendor whose self-immolation over repeated humiliations by city officials led to the Arab Spring. But for Iranians, the first point of reference remains the 1979 revolution that brought the mullahs to power.

“It’s a lose-lose situation for them, really,” said Bahari, adding that Iranians know Ejei, the Justice chief, “as a conniving, insincere person.” In any event, his offer of “dialogue” can hardly be answered. The protests are entirely leaderless, and the regime has dismantled every organization of the civil society that might be pressed into service as a go-between.

“Who are they going to bargain with?” asks Sepehri Far. “The labor unions they closed? The teachers they put in prison? The political parties they outlawed?”