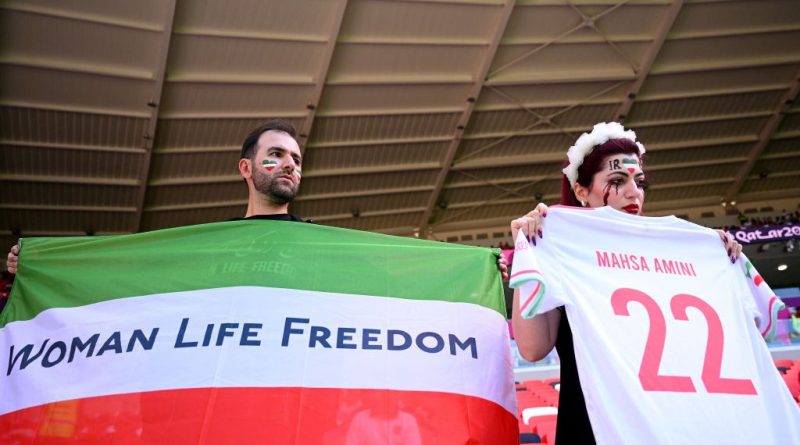 
Ever since the World Cup kicked-off, many Iranians have been torn over whether to support their national team at a time of mass protests over the death of 22-year-old Mahsa Amini on Sept. 16 while in police custody, after she was detained for allegedly violating mandatory hijab laws. That tension has grown as Iran and the U.S. face off Tuesday at 10 p.m. local time (2 p.m. EST) in a game that could determine which team will advance to the knockout stage.

As the Financial Times reported, some Iranians want their team to lose. “I just wondered where I had made that huge mistake in bringing him up. How could he back the mullahs’ team?” Soheila, a 58-year-old former nurse in Tehran, told the newspaper of her son’s support of the Iranian national team.

But for Arshin Adib-Moghaddam, a professor at the School of Oriental and African Studies, the reluctance of some Iranians to support their squad “shifted” after the win against Wales. “Iranians adore [soccer]. Despite all the politics surrounding their team, the enthusiasm displayed by them in the game against Wales had a contagious effect,” Adib-Moghaddam says.

Below, a round up of the controversy around Iran’s squad ahead of Tuesday’s game, and a look at the country’s odds of advancing to the knockout stage for the first time ever.

In a press conference Monday, U.S. head coach Gregg Berhalter and U.S. squad captain Tyler Adams fielded questions from Iranian state TV reporters about the relationship between the two governments, as well as their personal convictions. “We support Iran’s people and Iran’s team. But that being said, we’re laser-focused on this match, as they are as well,” Adams said, with a mispronunciation of the country’s name that led to further questions.

An Iranian journalist from the state-run PressTV corrected Adams’ pronunciation. “First of all, you say you support the Iranian people, but you’re pronouncing our country’s name wrong,” he said, pelting a series of political questions at the pair that stood in sharp contrast to most pre-game press conferences.

The U.S. Soccer Federation (USSF) briefly modified Iran’s flag on social media, posting it without the emblem of the Islamic Republic. According to a statement by the USSF on Sunday, the 24-hour move was a bid to show “support for the women in Iran fighting for basic human rights.” The gesture did not go down well with pro-regime figures in Iran, with the government calling on FIFA to expel the team from the World Cup over the move.

Ahead of Iran’s first game against England on Nov. 20, star player Ehsan Hajsafi said at a press conference, “I would like to express my condolences to all of the bereaved families in Iran. They should know that we are with them, we support them, and we sympathize with them.” The squad then stayed silent during their national anthem at the game. But the players reversed course and mouthed along to the anthem during the Nov. 25 game against Wales, days after former national player and regime critic, Voria Ghafouri, was arrested in Tehran.

Jürgen Klinsmann, a FIFA official and former U.S coach, came under fire after comments he made Friday criticizing Iran’s “gamesmanship.” Klinsmann repeatedly said “it’s in the culture” of Iranians to be unsportsmanlike and heckle referees. “This is not by coincidence, this is all purposely. This is just part of their culture, that’s how they play,” he said. “They work the referee, you saw the bench always jumping up, always working the linesman, constantly in their ears, they’re constantly in your face,” Klinsmann said, adding that Iran coach Carlos Queiroz—a Portuguese-Mozambican national—fits in well there.

Upon hearing these comments, Queiroz called for Klinsmann to resign from his role as a member of FIFA’s Technical Study Group in a Twitter thread posted Saturday, where he called the remarks “prejudicial,” “outrageous,” and a “disgrace to football.”

Klinsmann has defended his comments, saying Queiroz “took it the wrong way.” The former Tottenham striker also said he would call Queiroz to “calm things down.”

Can Iran advance to the knockout stage?

The most likely outcome is England beating Wales and the U.S. beating Iran Tuesday for the final two matches in Group B, according to American statistics website FiveThirtyEight. The two games are being held simultaneously at 10 p.m. local time (2 p.m. EST). But Iran could advance with a draw or win, depending on the outcome of the England-Wales game.