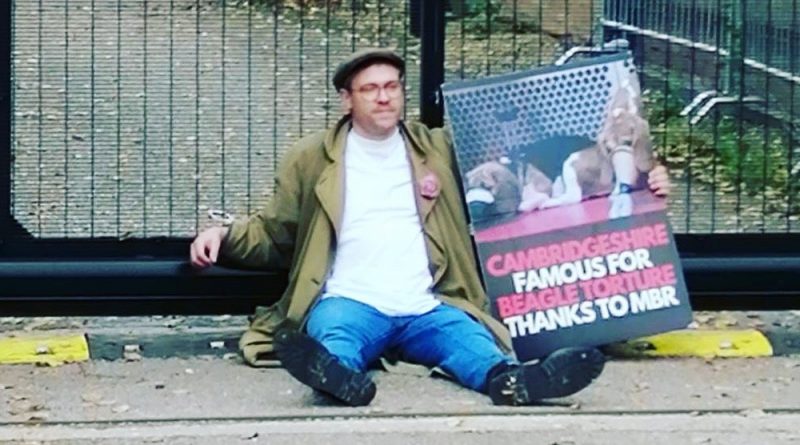 Will Young handcuffed himself to the gates of a puppy farm. (Camp Beagle)

Singer Will Young handcuffed himself to the gates of a Cambridgeshire puppy breeding centre as part of a months-long protest by campaigners.

He was photographed by the Twitter account Camp Beagle, which represents the protesters who have been calling for the MBR Acres site in Huntingdon, which breeds beagles for animal research, to be closed down.

Tweeting about his involvement in the protest, the former Pop Idol winner, 42, said: “I spent today at the gates of MBR Acres in protest of their testing on beagles.

“I wanted to raise awareness of animal testing and the fact that this is a puppy farm that farms over 2,000 beagle puppies a year to be sent out to their inevitable torture and death.”

Cambridgeshire Police confirmed to the BBC that they spoke to a man handcuffed to the gates, he released himself and moved away from the entrance.

I spent today at the gates of MBR Acres in protest of their testing on beagles. I wanted to raise awareness of animal testing and the fact that this is a puppy farm that farms over 2000 beagle puppies a year to be sent out to their inevitable torture and death. pic.twitter.com/npNM0jCk2p

Experiments are not carried out at the site, however protesters object to the fact that puppies are reared in the facility.

Actors Ricky Gervais and Peter Egan have previously been involved in protests against the centre, also promoting a petition to parliament calling for an improvement to the welfare of laboratory animals.

A spokesman for MBR said protesters are barred from accessing a designated exclusion area of the gates to prevent harassment of those who work at the facility.

The spokesman added: “We have stressed throughout the protest that we have no interest in stifling legitimate protest provided it is conducted lawfully and peacefully.

“We remain concerned that protesters continue to conduct unlawful activities at the sites as part of their campaign including unwarranted harassment and intimidation of our staff and others.

“We remain proud of what we do every day because our work allows the progress of medicine to save millions of human and animal lives.”

Get yourself down to join @willyoung Sawtry Lane Huntingdon Cambridge PE28 2DT pic.twitter.com/vWqfTluwG5

Will Young rose to fame as winner of talent show Pop Idol in 2002. He came out as gay shortly afterwards, and now regularly speaks out against the homophobia he has encountered.

In his 2020 book, To be a Gay Man, he wrote about the internalised shame foisted upon him by society.

Growing up in England under Section 28, a lack of sex education meant he learned about HIV through “fear-mongering” advertisements at a “very young age”, he told PinkNews, and he consequently grew up thinking it inevitable he would die of AIDS complications.

“It just became a fact in my head that I would die,” he admits. “It was so ingrained. It wasn’t until I became an adult that that changed. But it’s just an example of how lack of education linked with extreme prejudice created completely false truths in my mind.”