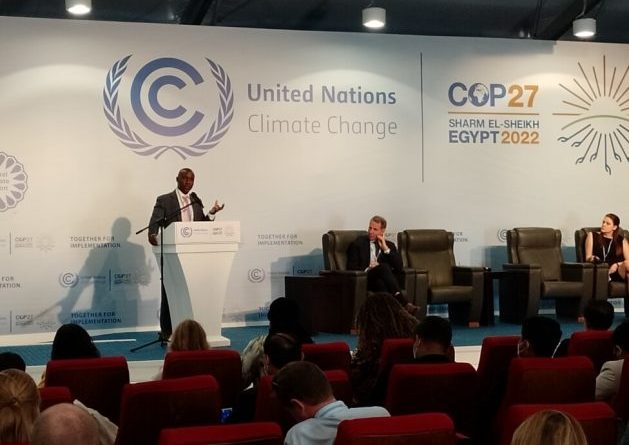 SHARM EL SHEIKH, Egypt, Nov 16 (IPS) – COP27 is unlikely to produce new commitments to reduce emissions of climate-changing gases, but the global energy crisis will eventually prompt more action by countries to move away from fossil fuels. That is the positive feeling that many observers are taking away from the annual climate summit being held in Egypt.

“The rise in energy prices due to Russia’s invasion of Ukraine set back many countries in the transition to renewable energies in 2022,” Manuel Pulgar Vidal, global leader of Climate & Energy at WWF, told IPS. “But this is not going to last, because developed nations have proven that the best path to energy security is to accelerate the abandonment of fossil fuels.”

The issue is seen from the same point of view in some countries of the developing South.

Costa Rica’s Minister of Environment and Energy Franz Tattenbach Capra was emphatic in an interview with IPS: “Countries like ours, which don’t have oil or gas, are appalled by the price increases. This will lead us to try to become less dependent on imports.”

The close relationship that has been established between climate action and economic development is easy to see at the 27th Conference of the Parties (COP27) to the United Nations Framework Convention on Climate Change, which has drawn more than 33,000 people to this seaside resort town on the Sinai Peninsula.

This link goes far beyond the negotiations between the 193 States Parties on climate change mitigation and adaptation, which this year focuses on climate action, as highlighted by the summit’s slogan: “Together for Implementation”.

COP27 is very much like a trade fair and a multitudinous meeting place, with an overwhelming number of talks, activities and document sharing, where the task of choosing where to be is very difficult and everyone constantly feels they are missing out on something more interesting happening at the same time.

While world leaders give speeches and technical officials discuss the next steps for climate action, countries, organizations and companies seek and offer financing, in public and private meetings, for all kinds of projects, ranging from energy, agriculture and infrastructure to the empowerment of indigenous communities.

“This process has been very skillful in connecting climate change and economics. We all know that countries that do not act responsibly with regard to the climate are going to slide backwards in the coming years,” said Pulgar Vidal, who co-organized and chaired COP20, held in Lima in 2014, when he was Peru’s environment minister.

The energy sector is definitely the master key to finding solutions to climate change, as it is responsible for more than three-quarters of global greenhouse gas emissions and is still primarily fossil-fuel based.

According to a report presented here by the International Renewable Energy Agency (IRENA), only 29 percent of generation comes from alternative sources and carbon emissions continue to rise.

And the past year “frankly, has been a year of climate procrastination,” said United Nations Environment Program (UNEP) executive director Inger Andersen on Nov. 15, the day dedicated to energy in the never-ending agenda of side events taking place at the Sharm el-Sheikh International Convention Center.

In the official negotiations, however, the energy discussion appears to be in the background, behind the debate on the creation of a fund to compensate for loss and damage in the countries of the South that have suffered the most from droughts, floods, hurricanes, forest fires and other phenomena that have accelerated in recent years.

COP26, held a year ago in Glasgow, Scotland, ended with a bitter taste with respect to energy when, following an intervention by India, a commitment was made to reduce, rather than eliminate, the use of coal, the most polluting fossil fuel.

For now, there is no indication that this summit will end with a better agreement in this area.

Effects of the war

Carlos Manuel Rodríguez, chair of the largest multilateral fund for financing climate action in developing countries, is also convinced that the energy crisis generated by the war in Ukraine will, in the medium and long term, trigger a faster transition.

“The conflict made many people understand how vulnerable the global energy system is and how harmful dependence on fossil fuels is,” the CEO of the Global Environment Facility (GEF) told IPS in one of the wide corridors of the Sharm El Sheikh International Convention Center, where the heavy traffic of people does not stop between 8:00 AM and 9:00 PM.

Rodríguez, the former Costa Rican environment minister, said that “With an energy mix based more on renewable sources, there would have been more resilience to the impact of the events in Ukraine. European countries have already understood this and I am confident that they are understanding it in other regions.”

Reports circulating in Sharm El Sheikh support the theory that the impact of the crisis could be beneficial for the energy transition in the long run.

In the four largest emitters – China, the United States, the European Union and India – public and private investment in transport electrification and renewable energy is growing due to market mechanisms and concerns about energy security, says a paper presented by the Energy and Climate Intelligence Unit (ECIU), an independent advisory organization based in the United Kingdom.

“The pace at which the green transition is speeding up…is remarkable….no-one who genuinely understands the interconnected crises facing the world believes that more oil and gas represent anything more than a very short-term solution,” Gareth Redmond-King, international lead at the ECIU, said at the climate summit.

A broad spectrum of organizations are taking part in COP27, aiming to influence the negotiation process and seek funding.

Harjeet Singh of the Climate Action Network International (CAN-I), an umbrella group of more than 1,800 organizations in 130 countries, told IPS that “the war in Ukraine shifted the focus of many developed countries from climate action to energy security.”

Singh has called for a commitment to halt the expansion of fossil fuels to be included in the outcome document of COP27, which is due to end on Nov. 18 if it is not extended by one day as is customary at these summits.

At the same time, he lamented that, because of the impact of the war, “we see the fossil fuel industry taking advantage of this space to sell itself as sustainable, which is unacceptable.”

Evidence of the need to appear as part of the oil sector’s climate action is everywhere in this gigantic Convention Center, where the organization Global Witness denounced that 636 lobbyists for oil interests and companies are registered as participants.

One of the hundreds of organizations with booths at Sharm El Sheikh is the OPEC (Organization of the Petroleum Exporting Countries) Fund for International Development.

“We came here to make ourselves visible, as we want to contribute to making the energy transition in all countries inclusive,” Nadia Benamara, Head of Outreach & Multimedia for the Vienna-based Fund, told IPS.

Benamara said the Fund pledged 24 billion dollars up to 2030 to finance climate action because “oil producing and exporting countries are also victims of climate change and want to contribute to the solution.”

IPS produced this article with support from Climate Change Media Partnership 2022, the Earth Journalism Network, Internews, and the Stanley Center for Peace and Security.