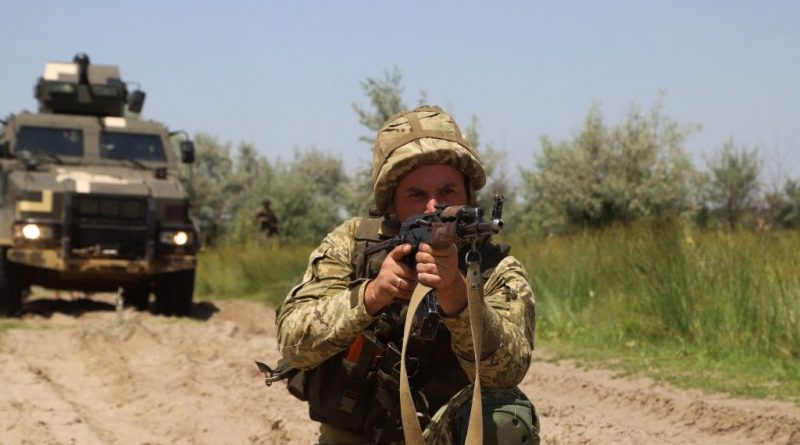 
Ukraine’s military this week launched a long-awaited counteroffensive in the southern Ukrainian city Kherson, the first major regional capital that Russian forces seized in the early stages of President Vladimir Putin’s full-scale invasion, which began on Feb. 24. The counteroffensive—one of the first for Ukrainian forces that have so far focused on defensive strategy—will be a bellwether of Kyiv’s long-term prospects and ability to recapture territory.

In his evening address at the start of the offensive on Monday, President Vlodymyr Zelensky issued a stark warning to Russian troops to “run away” from the strategically important southern Kherson Oblast. The city of Kherson, the capital of the province that goes by the same name, lies to the northwest of the Dnipro river that runs through Ukraine, effectively partitioning the country between east and west. (Kherson Oblast itself encompasses territory that lies both to the west and east of Dnipro, straddling the river.) Recapturing the city would likely cement Kyiv’s hold on western Ukraine, analysts tell TIME, strengthening the army’s position for future attacks.

Ukrainian forces have this week regained several villages and broken through multiple points along the Russian defense line in Kherson Oblast north of the Dnipro, according to Ukrainian officials. But a near-total news blackout in Ukraine on the operation instigated by Kyiv has made it difficult to fully assess the situation.

Read more: Ukraine and Russia: Where the War Stands, What Happens Next

“This is a planned slow operation to grind down the enemy, saving the lives of our military and civilians,” Oleksiy Arestovych, an adviser to the Ukrainian government, said on a YouTube news channel.

Russian troops seized the Kherson Oblast in March, but were met with multiple protests from Ukrainians. Moscow reportedly has plans to hold a sham referendum on the region joining Russia, similar to the one in Crimea in 2014, which Russia annexed that year.

Besides its geographical importance, Kherson is an important target for Kyiv given the Russian military’s vulnerability in the region, explains Mark Cancian, a senior security adviser at the Center for Strategic and International Studies (CSIS), a Washington, D.C.-based think tank. Some 15,000-20,000 Russian troops are stationed to the northwest of the river—a successful offensive would enable Ukrainian forces to “encircle” and “isolate” their opponents, he says. If Kyiv is able to capture many prisoners of war in this way, it could render significant portions of the Russian military in the region “unviable.”

And Ukraine isn’t relying solely on frontline fighting to make this happen. In preparation for the offensive, explains Cancian, the army has used long-range missile strikes to target Russia’s logistics network, including ammunition storage sites, convoys, and bridges that served as a key reinforcement or withdrawal route for Russian forces.

But while the Ukrainian side has been “methodical” in its preparation for the offensive, says Ed Arnold, a research fellow for European security at the British military think-tank RUSI, there is a risk of leaving other points on the frontline vulnerable to a Russian attack.

“The issue is the Ukrainians are pressing on almost five fronts” along the west of the Dnipro, Arnold says. “If they’re successful in Kherson, some in the military and political command may say ‘well, let’s go further and further.’ And by doing that, they could actually put their gains at risk, because they would overextend their lines.” It’s important to keep each front balanced, Arnold adds, to “avoid having to fight protracted fights, especially in cities because they don’t want to destroy their own population centers.” He says the best tactic, which Kyiv seems to be pursuing so far, is to isolate Russian units in “pockets” and try to force their surrender.

The success of Kyiv’s counteroffensive could have a broader impact on the war effort than simply territorial gains. Gaining a key southern city back from Russia would “prove to Ukraine’s Western backers that it can use all of the high-end weapons systems it’s been gifted to great effect,” Arnold says. In July, the U.S. committed to sending four additional mid-range rocket-launching systems, known as HIMARS, to add to the eight already sent to Ukraine in June. The advanced range, accuracy, and mobility of the HIMAR systems has allowed Ukraine to strike deep into Russian-controlled Ukrainian territory.

“HIMARS have hardly had any rest during the day or at night,” Ukrainian military expert Oleh Zhdanov told the Associated Press, after the first batch earlier this year. “The results have been impressive. Over 30 important Russian targets have been hit with high precision over the past two weeks.”

If, however, Ukraine’s offensive in Kherson fails, Western backers may modify their objectives in Ukraine in favor of a “negotiated settlement” with Russia, Arnold says. (Zelensky in July ruled out conceding land as part of a peace process, while Putin said that negotiations would become harder the longer the conflict goes on.) As the war continues to exacerbate high inflation and energy prices, it may well become difficult for Ukraine’s allies to sell continued support to domestic electorates, Arnold adds.

Read more: Europe’s Energy Crisis Is Going to Get Worse

As Europe heads toward winter, the end of what Arnold calls the “fighting season,” both sides will take time to replenish their forces and weaponry and rethink their longer-term strategy. Ukrainian success in Kherson would lay the foundations for a “broader” counteroffensive in the spring, CSIS’s Cancian says, boosting morale and control in the south while reassuring allies of the Ukrainian army’s capabilities.

Yet, even if Ukraine does retake Kherson, most experts agree the war will likely grind on for many more years, with periodic fighting concentrated in specific areas. “It’s already a war that’s been going on for eight years in its current form [since the annexation of Crimea],” Arnold says, “so we need to start to think about things in those types of timeframes.”