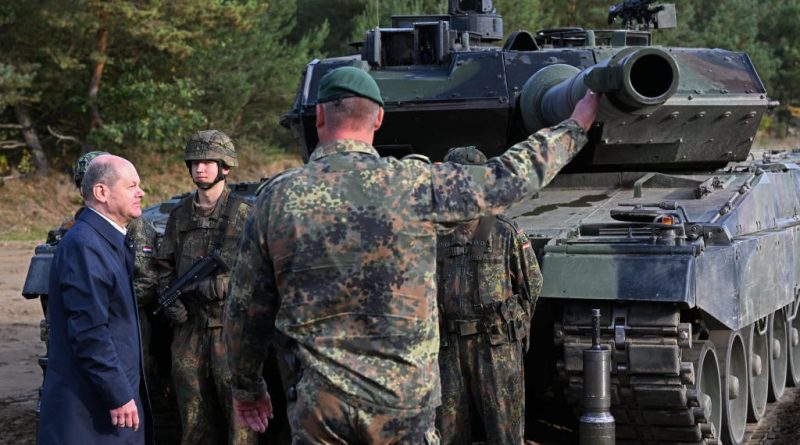 
Amid growing pressure, Germany’s new Foreign Minister Annalena Baerbock said on Sunday that Berlin will not block Poland if it asks to send its supply of German-made Leopard 2 tanks to support Ukraine’s war efforts. The comments appear to pave the way to end a tense standoff between Germany, a reluctant supplier of military hardware to Ukraine, and Poland, a leading advocate within the European Union of arming Ukraine.

Following Baerbock’s comments, Poland said on Monday that it would ask Berlin for permission to send 14 Leopard 2 tanks to Kyiv. Germany requires approval before a country decides to re-export the German-made Leopard 2 tanks. There are around 2,000 Leopards stocked across over a dozen European countries.

Fears had been growing that Poland would disregard Germany’s re-export license requirements, a move that could damage NATO unity and Polish-German relations. “We will ask for permission, but this is a secondary theme,” Prime Minister Mateusz Morawiecki said on Monday. “Even if, eventually, we do not get this permission, we—within this small coalition—even if Germany is not in this coalition, we will hand over our tanks, together with the others, to Ukraine.”

Last week, Western defense officials sought to hash out an agreement with Berlin over the tanks, to no avail.

The debate around Western battle tanks escalated after the U.K. pledged earlier in January to supply Ukraine with some of its own tanks, the British Challenger 2s. On Thursday, Washington said it planned to supply 90 Stryker combat vehicles to Ukraine.

Read More: Ukraine Is Getting British Tanks. What Its Military Really Needs Is German Leopard 2s

Below, what to know about Leopard 2 tanks, and why they are integral to Ukraine’s war strategy.

What are Leopard 2 tanks?

Germany unveiled the battle tanks in 1979, during the Cold War. According to the European Council on Foreign Relations, these diesel-powered battle tanks are used by: Austria, Denmark, Finland, Germany, Greece, Hungary, Norway, Poland, Portugal, Spain, Sweden, Switzerland, and Turkey. They have also been used in conflicts in Syria, Afghanistan, Bosnia, and Kosovo.

The tanks hold a 120mm smooth bore gun as well as two light machine guns, The Guardian reports. They also have night-vision capabilities and a laser range finder that can measure distance to moving targets.

Why are Leopard 2 tanks important to Ukraine?

Leopard 2s have offensive capabilities due to their artillery firepower. As such, they are more lethal than the Soviet-era tanks Ukraine and Russia have relied on until now, Mark F. Cancian, a retired Marine Corps reserves colonel and senior advisor at CSIS, previously told TIME.

“They lack the fire control of modern Western tanks—the ability to spot and hit a target at longer ranges,” Cancian said. Meanwhile, he added that the German-made tanks boast two advantages: “One is that it’s a technology that’s familiar to Ukrainians; it uses a diesel gas turbine engine. The other one is that there are lots of them out there.”

An additional advantage to these tanks is that the majority of them are located in Europe and getting the tanks to Ukraine would be logistically practical.

Germany’s anti-militarist stance is recognized as a post-World War II hangover. But Poland is determined to send its supply of Leopard 2s to Ukraine and rally other Western ally nations to do so. Some believe this would mark an escalation, despite Ukraine insisting that it would only use the tanks in its internationally-recognized borders.

Russian Deputy Foreign Minister Sergei Ryabkov said on Monday that Western supplies could lead to “unpredictable” consequences. “We have said on numerous occasions that escalation is the most dangerous path, and the consequences may be unpredictable,” Ryabkov said. “Our signals are not listened to, and Russia’s adversaries keep raising the stakes.”

But Ukraine’s Western allies have stepped up their support in recent weeks as Moscow ramps up its attacks targeting civilian infrastructure.