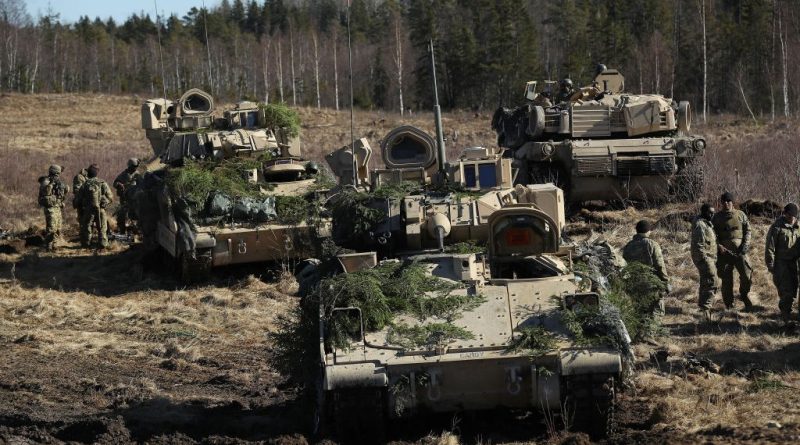 
Ukraine will get a major delivery of armored fighting vehicles from the West, following a deal last week that saw the U.S., France, and Germany agree to send them.

The White House announced Thursday that the U.S. would provide Bradley fighting vehicles, which can transport infantry in combat zones and fire at enemy forces, as part of the newest military aid package totaling $2.85 billion. It would send about 50 Bradleys, according to the Associated Press.

The provision of Bradleys marks a continued willingness from the Biden administration to expand the kinds of weaponry and equipment they will provide to Ukraine. Back in June, the U.S. began providing the country with long-range HIMARS rockets. But they have remained reluctant to send heavier battle tanks with longer-range guns, as Ukraine has requested.

Effective armored vehicles can provide Ukraine with more offensive and defensive options. “The fundamental mission of fighting vehicles is to transport troops… into a protective place that they can move around the battlefield, and then get out when they need to engage in combat,” says Ian Williams, deputy director of CSIS’s Missile Defense Project. “Often times the most dangerous part for infantry is just getting to the fight.”

This will be particularly important as the war is entering a “grinding, attritional phase… where breakthroughs are becoming harder,” Williams says. These fighting vehicles can help Ukraine launch further offensives in a country with flat and open terrain, he adds.

Below, what to know about the new weapons, and why they matter.

“The Bradley is an effective armored personnel carrier that is capable of conquering challenging terrain that humvees and other non-tracked vehicles cannot,” says George Barros, an analyst on the Russia and Ukraine portfolio at the Institute for the Study of War, in an emailed statement to TIME. “It helps transport soldiers safely to take the fight to the adversary.”

It has a powerful 25 mm chain gun and TOW missiles that can make it effective against tanks. “What the Bradley does is bring firepower,” says Mark F. Cancian, a retired Marine Corps reserves colonel and senior advisor at CSIS. “It is powerful enough to punch through a lot of armor, not just for lightly armored vehicles, but even tanks.”

The TOW missiles in particular could prove to be effective because they can destroy Russian tanks as well as out-range some of them, Williams says.

The Bradley also has sophisticated features when it comes to night vision, range calculators, and fire control. They can be used in a reconnaissance role, too.

“Ukraine needs more mechanized equipment to help Ukrainian forces maintain the military initiative following its successful counter offensives in Kharkiv and Kherson in late 2022,” says Barros. “I hope the decision to give Ukraine Bradley’s is a precursor to Ukraine eventually receiving Western main battle tanks, which the Ukrainian government has been requesting for months.”

The U.S. had already sent some armored vehicles to Ukraine—such as 200 M-113 troop carriers—but those mostly offered transportation, not effective firepower. “They call it a battlefield taxi; it’s really just an aluminum box that gets soldiers around,” Cancian says.

The AMX-10 is often referred to as a “tank killer” for its powerful firepower.

The gun is much larger than the American Bradley and German Marder; it does not typically carry much infantry.

The AMX-10 is a wheeled vehicle that can move relatively quickly but often needs to stay on roads or firm ground, according to the Wall Street Journal.

The AMX-10 has relatively light armor which could prove difficult in withstanding Russian guns.

The German Marder has a 20 millimeter auto cannon—and has the weakest firepower of the three vehicles.

It’s an older vehicle, which was first developed in the early 1960s, with MILAN anti-tank missiles and steel armor, according to Forbes.

The Marder can travel at 40 miles per hour and carry three crew and six infantry, Forbes reports.