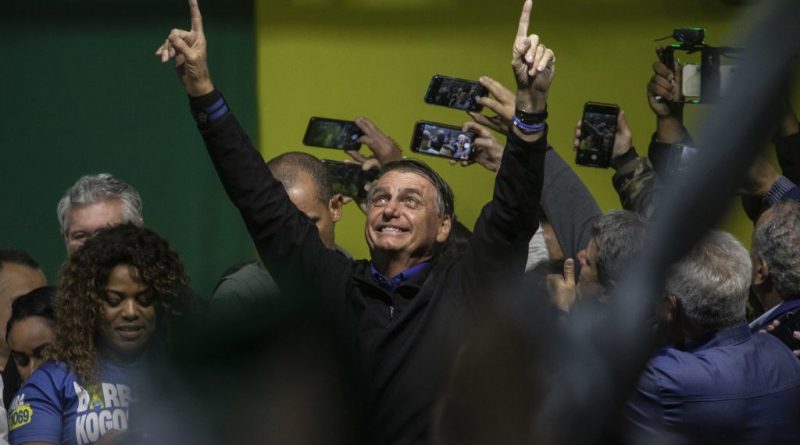 
Brazilian President Jair Bolsonaro has spent much of the past four years imitating one man: Donald Trump. Bolsonaro did so during his 2018 presidential campaign, when his iconoclastic political style and crude statements about women, Indigenous groups, and the media earned him the moniker “Trump of the Tropics.” He did so again during the COVID-19 pandemic, when he railed against lockdowns and spread misinformation about the safety and efficacy of lifesaving vaccines. And he did so in the aftermath of the 2020 U.S. presidential election, when Bolsonaro became one of the few international leaders to back Trump’s baseless claims of voter fraud, and was one of the last to finally acknowledge Trump’s defeat.

The fear now facing many Brazilians is that Bolsonaro could pull off his biggest Trump tribute act to date when their country goes to the polls for the first round of its general elections on Sunday. The far-right Brazilian leader has spent much of the past year claiming, without evidence, that his country’s electronic voting system is susceptible to fraud. (Brazil’s electronic voting system, which was introduced more than two decades ago explicitly to combat fraud, has a strong track record for reliability.) Bolsonaro has repeatedly refused to commit to a peaceful transfer of power should he lose reelection, presenting his only options as victory, arrest, or death. With polls showing him trailing his left-wing rival, the former President Luiz Inácio Lula da Silva, Brazilian democracy seems poised to be put on a collision course with Bolsonaro and his most loyal supporters, some of whom have threatened violence against their opponents.

Trump’s “Stop the Steal” playbook might seem like an odd one for the Brazilian President to follow. The former U.S. President didn’t, after all, stop the transition of power to Joe Biden. His supporters’ storming of the Capitol on Jan. 6, 2021 also earned Trump the distinct dishonor of being the first President to ever be impeached twice. The seemingly obvious question, then, is what Bolsonaro stands to gain from emulating a strategy that ultimately failed?

The answer is a lot. Yes, Trump did not retain the presidency. But by virtually every other metric, he has been a success. He remains the de facto leader of the Republican Party and is widely seen as the favorite to win his party’s nomination for the 2024 presidential election. Unlike most former presidents, who often tend to retire into relative post-political obscurity, Trump continues to be relevant. While this is partly driven by the range of criminal and civil investigations he faces, it is also influenced by the intrigue over whether he’ll indeed stand as a candidate in 2024. “I’ve already made that decision,” Trump told New York magazine in July, without specifying further. A good entertainer knows how to keep his audience engaged.

If Bolsonaro has learned anything from Trump, it’s that the politics of grievance can have its advantages. It can be weaponized to galvanize your base, lend support to your allies, and, perhaps most crucially for Boslonaro, shield yourself from prosecution by declaring any such efforts to be a politically-motivated witch hunt. For Bolsonaro, who previously faced potential criminal charges over his mishandling of the COVID-19 pandemic, this could factor into his decision making. “It doesn’t guarantee immunity, but it provides you with an extra layer of protection,” says Oliver Stuenkel, a professor of international relations at Fundação Getúlio Vargas, a university and think tank in São Paulo. “Bolsonaro’s interpretation is that there is an actual incentive not to concede and that in many ways he’d be better off if he contested the result.”

Read More: What To Know About Brazil’s Crucial Election

But Brazilian democracy would stand worse off for it. The country’s faith in democracy had already taken a beating under Bolsonaro, with 44% believing that Brazil is becoming less democratic, according to a recent study conducted by YouGov. Analysts fear that Bolsonaro’s unfounded claims about voting machines stands to only further undermine Brazilians’ trust in the democratic process and could even lead to widespread unrest or, worse yet, an attempted coup. Claims of electoral fraud and content discrediting the electoral process have already run rampant on Brazilian social media.

While U.S. institutions ultimately withstood Trump’s efforts to subvert the election, its consequences are still being felt today. Trump’s “Stop the Steal” campaign continues to have widespread traction—so much so that candidates endorsing his election fraud claims are expected to appear in ballots in nearly every state in the U.S. midterms this November. Brazilian democracy could prove to be even less robust. “Faith in institutions was already much lower in Brazil than in the United States,” says Christopher Sabatini, a senior researcher fellow for Latin America at Chatham House and founder of Americas Quarterly. Even if an attempted coup doesn’t materialize, the country could still be left with millions of hardcore Bolsonaro supporters who no longer have faith in the democratic process. In this way, Sabatini adds, “The damage has already been done.”

What Bolsonaro ultimately does is anyone’s guess. During the final weeks of the campaign, the Brazilian leader has offered contradictory statements. On a podcast earlier this month, he appeared to acknowledge the prospect of electoral defeat, saying that he would quit politics if that ever came to pass. Days later, while visiting London for Queen Elizabeth II’s funeral, he told a Brazilian broadcaster that if he wins less than 60% of the vote in the first round of voting, “something abnormal has happened.” (If neither candidate exceeds 50% of the vote in the first round, there will be a runoff at the end of October to determine the winner.)