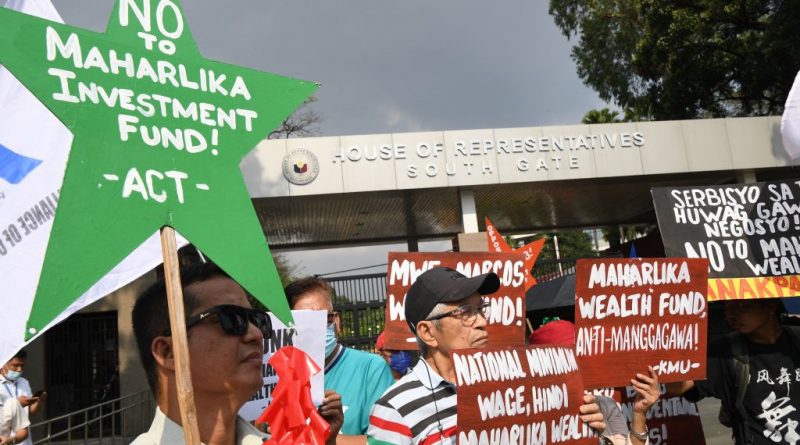 
As 2022 draws to a close, lawmakers in the Philippines are pushing for the establishment of a sovereign wealth fund to purportedly help the country finance future economic development.

President Ferdinand Marcos Jr. had called for the immediate enactment of the fund’s implementing bill, which was initially proposed on Nov. 28. A revised version of the bill was passed by the House of Representatives on Thursday, just before Congress goes on Christmas holiday break. It now awaits a legislative counterpart from the Senate.

Marcos Jr., who was elected in May, vouches for the fund’s creation, telling reporters on Dec. 12 that it will bring “added investment” to the Southeast Asian nation of 110 million people. His economic team, meanwhile, have cited similar state-owned funds in Singapore and Indonesia as a testament to the potential success the Philippines could reap.

But the proposal to establish the Maharlika Investments Fund (MIF), as it’s been named, is highly controversial. (“Maharlika” is a Filipino word meaning upper-class that was co-opted by Marcos Jr.’s father, the late Philippine dictator Ferdinand Marcos, who falsely claimed it was the name of a World War II guerilla unit he led.) State-owned investment funds in nearby countries have faced mismanagement and corruption, and it’s not clear the proposal for one in the Philippines has the safeguards to be different.

Read More: A Dictator’s Son Rewrites History on TikTok in His Bid to Become the Philippines’ Next President

Over the last few weeks, analysts and critics have raised concerns that the fund may become a hotbed for scandal, like the 1MDB corruption case in 2015 involving the Malaysian sovereign wealth fund that resulted in the country’s former prime minister, Najib Razak, going to prison.

In response to criticism, lawmakers in the Philippines revised their plan for MIF, no longer making the president chair of the fund’s managing board and changing the source of its seed money from pension funds to central bank dividends.

But many still question the establishment of a sovereign wealth fund in the Philippines, given the inherent risks of any public investment venture, especially as a global recession looms and the Marcos family is no stranger to corruption issues and unexplained wealth. Groups of protestors staged rallies in front of the House of Representatives in the past week to denounce the fund’s creation.

Jayson Lamchek, research fellow at Deakin University Law School in Australia, says a sovereign wealth fund in the country could play out like a game of “cat and mouse” between politicians and the public. “If they go through this game, they may very well end up being swallowed up live by the politicians and the elite family,” Lamchek tells TIME.

“But they probably need to play that game because the sovereign wealth fund can benefit them if it’s designed well.”

What is a sovereign wealth fund?

Sovereign wealth funds differ from other government financial entities in that, unlike central banks that hold foreign currency reserves to manage national monetary policy, they’re focused on returns—and thus tend to have a higher risk tolerance.

Such funds vary in size, most of which are financed with revenues from natural resources, particularly energy commodities like oil and coal. The numerous sovereign wealth funds around the world are big enough to affect global markets.

At the beginning of this year, there were 161, managing more than $10 trillion in assets, according to Global SWF’s 2022 report—though many countries have more than one fund. In 2021, at least 70 countries had at least one sovereign wealth fund, according to research from IE University in Spain. China Investment Corporation in Beijing is the largest, according to Sovereign Wealth Fund Institute rankings, holding $1.35 trillion in assets. Norway’s Government Pension Fund Global follows closely behind. The U.S. has no federal sovereign wealth fund, but a number of states have funds that operate similarly.

In Southeast Asia, two of the largest funds are in Singapore, where the city-state’s money management allows it to use investment profits to cover up to 20% of the national budget. (One of these, Temasek Holdings, had a write-down of $275 million after cryptocurrency exchange FTX went bankrupt in November.) Indonesia launched its own sovereign wealth fund in 2021.

How will the Philippines finance its wealth fund?

Unlike Norway and neighbor Timor-Leste, the Philippines will not use revenues from natural resource windfalls to finance its proposed sovereign wealth fund. The Southeast Asian nation also does not have a current account surplus like Singapore. Instead, it will reportedly seed MIF with its central bank’s dividends and investible funds from the country’s Land Bank and Development Bank, after the public criticized initial plans to use pension funds that were, in 2018, at risk of bankruptcy. The latest version of the proposal does allow for pension agencies to invest in the fund in the future.

Lamchek says pension funds would be among the “absolute worst choices” to endow MIF, but bonds aren’t much better, he believes, arguing that investing with cash the government cannot afford to lose negates the idea of a sovereign wealth fund. “That’s really liabilities—not wealth,” he tells TIME.

Emerson Sanchez, a research fellow at the Institute for Infrastructure in Society at the Australian National University Crawford School of Public Policy in Canberra, says the Maharlika fund’s current financing strategy is “piling on risk after risk.”

The Philippines is still facing macroeconomic headwinds post-pandemic: despite robust growth, the country has $243 billion in foreign debt and inflation at a 14-year-high.

“There are several safeguards embodied in the MIF to ensure its transparency and accountability,” the chair of the House Committee on Banks and Financial Intermediaries Irwin Tieng told lawmakers earlier this week. The latest revised proposal, he said, ensures that the MIF will comply with the Santiago principles, a voluntary set of guidelines established by the International Monetary Fund and a coalition of sovereign wealth funds to promote standards of transparency and good governance in the management of sovereign wealth funds.

Bangko Sentral ng Pilipinas, the central bank of the Philippines, had initially expressed concerns about transparency in governing the MIF, but it now backs the fund’s creation. The central bank’s governor Felipe Medalla said his concerns have been “completely addressed,” according to Reuters, adding that he doesn’t think the fund as currently proposed will negatively affect the bank’s ability to maintain price stability in the country.

What are the corruption risks of the Maharlika Investments Fund?

Finance experts have long raised concerns over sovereign wealth funds for their potential for corruption and mismanagement. Malaysia’s Najib was sentenced to 12 years in prison on charges of criminal breach of trust, abuse of power, and money laundering related to 1MDB. An estimated $4.5 billion was looted from the investment fund, with hundreds of millions of public dollars allegedly transferred to Najib’s personal bank accounts.

Singapore has also previously come under fire for its opaque sovereign wealth funds. The Singapore government has long argued that disclosing the assets under management of GIC, the other fund along with Temasek, is not in the “national interest.”

With the Philippines’ ranking 117th among 180 countries in the latest Corruption Perceptions Index, the public has good reason to fear potential malversation to do with the MIF.

The fund already has the appearance of a family affair. Three of the lawmakers who proposed the MIF were related to President Marcos Jr.—his son Ferdinand “Sandro” Alexander Marcos III, his cousin and House Speaker Ferdinand Martin Romualdez, and Romualdez’s wife Yedda Marie.

The Marcos family accrued an estimated $10 billion in unexplained wealth while the late Marcos Sr. was in office; only a fraction has been recovered. Marcos Jr.’s mother, Imelda, was convicted of graft by the country’s top court in 2018. Marcos Jr. and Imelda also have a standing U.S. contempt order in relation to human rights violations during the Marcos patriarch’s dictatorship.

Read More: The West Will Work With the Philippines’ Next President, Even If He Is a Dictator’s Son

But not all Marcos relatives seem keen on creating the MIF: earlier this month, the President’s sister Senator Maria Imelda Josefa Remedios “Imee” Marcos expressed reservations about the fund, referring to the 1MDB scandal in Malaysia and the current unfavorable economic climate.

What is the best design for a sovereign wealth fund?

In 2021, Lamchek and Sanchez studied whether a Philippine sovereign fund would help manage the country’s energy resources, using the cases of Singapore, Indonesia, and Timor-Leste as case studies.

The two noted that sovereign welfare funds work best when given political independence, with Sanchez emphasizing the need for a gap between the executive branch of government and the fund’s board of directors. “Political patronage clouds sound investment decisions,” Sanchez warns.

But another way to thwart corruption in these wealth funds is to include direct benefits to the public, says Lamchek. In Alaska, eligible citizens receive dividends from the state’s permanent fund. Giving these sorts of payments would increase citizen engagement in the MIF, Lamchek says.

“It’s not enough, for example, that the sovereign wealth fund is transparent,” Lamchek tells TIME. “We need ordinary people involved.”