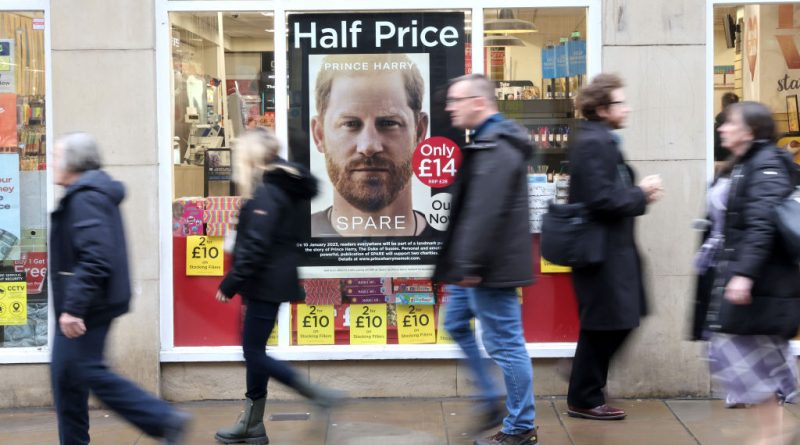 
The British royal family has become practically synonymous with its famous credo “never complain, never explain,” especially following the Tuesday release of Prince Harry’s memoir Spare, in which he dedicates 416 pages to doing a fair bit of both.

Despite that, it may all be for naught. According to a recent survey of about 1,700 U.K. residents by the British pollster YouGov, over half (54%) of the British public have a favorable view of the monarchy as an institution, though that figure has declined from 60% in November after Queen Elizabeth II’s death. The survey, which was conducted from Jan. 5 to 6, came amid a steady drip of revelations leaked from Spare ahead of its official release, including the allegation that Prince William assaulted Harry.

The one glaring exception to Spare’s impact may be on the person Harry least expected. The same survey found that Harry’s own popularity among Britons has fallen to its lowest point since YouGov began tracking it more than a decade ago, with just over a quarter (26%) having a positive opinion of him compared to nearly two-thirds (64%) who have a negative one. This decline is even seen among younger Britons who have historically been more sympathetic to the Duke of Sussex.

Harry’s popularity has been steadily declining since November 2017 (a period that coincides with his engagement to Meghan Markle, the Duchess of Sussex), according to YouGov, with its steepest drop occurring in January 2020, when Buckingham Palace announced that the Sussexes would no longer be working members of the royal family. The only other royal to experience a dip in popularity is his brother William, whose favorability has declined far more modestly by comparison—from 77% in December to 69% in early January. Attitudes toward the remaining royals such as King Charles, Kate Middleton, and Markle remain largely unchanged at 60%, 69%, and 23%, respectively.

The lack of movement in British public opinion when it comes to the royal family isn’t wholly surprising. As an institution, the monarchy has long enjoyed broad, albeit declining, support among Britons, even if several of its individual members have not. And while the promotion of Spare has shed light on several concerning aspects of royal life—from the claim that Harry’s own family were behind negative stories that appeared about him and his wife in the British tabloid press to the archaic rules governing details as seemingly minute as beard lengths—the revelations appear to have largely passed most Britons by.

This may be explained at least in part by Britons’ pre-existing views of the Sussesexs, whose decision to quit England for a warmer California coastline may have been regarded by some as a kind of defection. But it may also be explained by the very British preference for having a stiff upper lip—the stoic quality that, by pulling back the palace curtains on the reality of royal life or (or, in Harry’s telling, taking ownership of his own story), Harry betrayed.

“In Britain, I think it’s part of our DNA,” Richard Fitzwilliam, an expert on the royal family, says of the monarchy, noting that while Harry’s estrangement represents a serious fissure within the family, it’s nothing that the institution hasn’t faced before. “There is a dysfunctionality about the monarchy, about the way the family is forced to behave,” adds Fitzwilliam, “but then, on the other hand, that makes it even more fascinating.”

If the Sussexes can count on more support, however, it is in the United States. By and large, Americans tend to be more sympathetic to the Sussexes than Brits, particularly among those who see the royal couple as taking a stand against the racism that Markle encountered in Britain. It helps that the U.S., home to monarchists and Anglophiles alike, tends to view British royalty as an extension of celebrity culture, rather than representatives of a sacrosanct institution.

But if the Sussexes aren’t careful, they could run the risk of alienating their American sympathizers, too. “Everyone has a family, I have arguments with my family—am I going to put that out there for the whole world to see,” said CNN anchor Don Lemon. “I know he’s selling a book, but to me it’s just … gauche.”

“We’ve all just fallen down some wormhole where we will never be free of hearing every single detail of Prince Harry’s life,” tweeted American television personality Meghan McCain. “This is never going to end. He’s never going to let us live!”