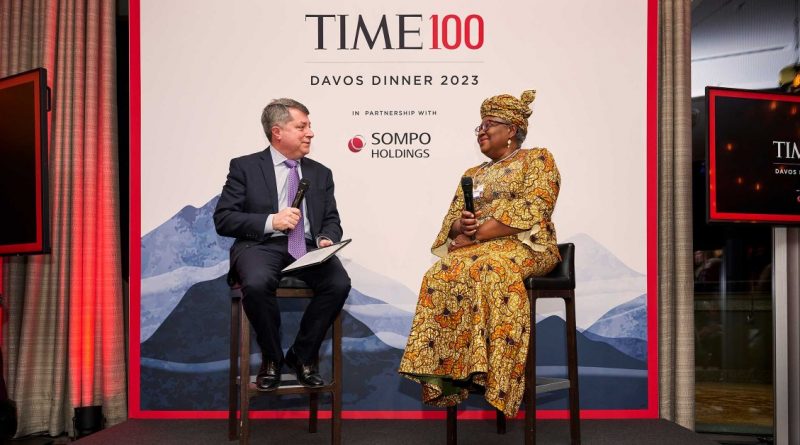 
In 2023, TIME will once again recognize 100 businesses making an extraordinary impact around the world. Applications for the TIME100 Most Influential Companies of 2023 are open, now through March 1, 2023. Apply here.

Hello from the Swiss Alpine town of Davos, where scores of political power brokers and corporate executives—plus a fair few experts, activists, and journalists—have gathered for the 53rd annual World Economic Forum. For seasoned Davos-goers, this year’s gathering marks the WEF’s first full return to its traditional format since the COVID-19 pandemic, which moved the summit online in 2021 and to the spring in 2022. This week, we’ll be bringing you the latest from the forum, including insights on the most-talked about issues, quote-worthy things said, and more.

As Davos kicked off on Monday night, TIME hosted its TIME100 Dinner, during which the World Trade Organization’s director-general Ngozi Okonjo-Iweala and the International Monetary Fund’s managing director Kristalina Georgieva called on attendees not to let the myriad of crises facing the world distract from the urgent need for greater cooperation and multilateralism. “I see the world clouded in tension,” Okonjo-Iweala told TIME Editor-in-Chief Edward Felsenthal in a keynote conversation at the dinner, adding that: “If we don’t cooperate on the things that matter together, then we’re going to perish together.”

It was a stark but fitting reminder for Davos attendees, many of whose schedules have been consumed by panels and coffee meetings dedicated to discussing the biggest challenges of the day, most notably the nearly year-long war in Ukraine (which hasn’t escaped mention in any event or conversation that we’ve been a part of), the cost-of-living crisis (which WEF has declared the biggest short-term threat), and the looming threat of the climate crisis (the reality of which has been on full display in Davos, where there has been very little snow compared to previous years).

As one seasoned Davos attendee from Chile put it, the calls for greater cooperation—which fit nicely within the gathering’s official theme, “cooperation in a fragmented world”—complement an organization that is as seemingly rooted in optimism and dialogue as the WEF. “It’s all very Swiss.”

But the group that this message is perhaps most targeted towards is among one of the most conspicuously absent from this year’s Davos: world leaders. All told, there are 52 heads of government attending Davos this year, including the prime ministers of Finland and Latvia as well as the presidents of the Philippines and Chile. But many of the world’s political heavyweights have chosen to stay away. Of the G7 leaders, only Germany’s Olaf Scholz is slated to attend; President Joe Biden, as well as Britain’s Rishi Sunak, France’s Emmanuel Macron, Italy’s Georgia Meloni, Japan’s Fumio Kishida, and Canada’s Justin Trudeau, opted to shun the event and send deputies in their place.

Theories abound as to why. One attendee surmised that the forum has become too “toxic” for world leaders, noting that their domestic audiences wouldn’t look too kindly on them hobnobbing with the global elite while their voters reel from the cost-of-living crisis at home. It doesn’t help that WEF has also been subject to plenty of controversy, from more legitimate criticisms over the forum’s private jet-flying opulence and exorbitant fees to absurd conspiracies that have framed the forum as a globalist cabal plotting to control humanity. (If you don’t believe us, just search “Davos” on Twitter.)

Whatever the reason, the absence of the leaders of the world’s major economies suggests that Davos may not be as high of a priority as its organizers, or attendees, might like to think. When asked about President Biden’s absence, Sen. Chris Coons told TIME that U.S. presidents don’t typically attend Davos, noting that “Obama never came.” Indeed, the first sitting U.S. president to appear in Davos was Bill Clinton in 2000. None of his successors opted to follow suit until Donald Trump arrived in 2018.

Benjamin Haddad, a French lawmaker and the spokesperson for Emmanuel Macron’s ruling Renaissance Party in the National Assembly, noted that the French president has attended several times, both virtually and in person. “I assume [there’s] not the need to attend every year,” Haddad, who was also not attending Davos, said in a text.

Word of the day

Perhaps the most ubiquitous buzzword of this year’s Davos gathering has been “polycrisis.” The term, which was popularized last year by the economic historian and Davos attendee Adam Tooze, describes the simultaneous and overlapping crises facing the world today: a health crisis, a mounting climate crisis, a war in Europe, an inflation shock, democratic dysfunction, and much more.

“The variety of different shocks of the type that we’re dealing with right now is extremely unusual,” Tooze told TIME. “That’s what the polycrisis notion is trying to get at—it’s like a bad breakfast buffet. The thing about it is that it’s an indigestible mixture of ingredients that do not normally go together in a constellation of forces.”

While Tooze gave the term new life, he acknowledges that he wasn’t the first to use it. He borrowed it from the former European Commission President ​​Jean-Claude Juncker, who invoked the term in 2016 to describe the flurry of challenges facing the E.U., including the Syrian refugee crisis and the Brexit referendum. The original coiner of the term was French philosopher Edgar Morin, who introduced the term in the 1990s.

Given the mood of this year’s gathering, it’s little wonder that polycrisis has gained so much traction. But not everyone is happy about it. Historian Niall Ferguson dismissed the term as a useless concept, noting that “it’s just history happening.” Gideon Rachman of the Financial Times called it one of his “least favorite cliches.”

Pfizer CEO Albert Bourla being congratulated by Will.i.am on the company’s COVID-19 vaccine success, and posing for selfies with other attendees, later joined by Al Gore, at TIME’s reception Monday night.

—With reporting by Ayesha Javed