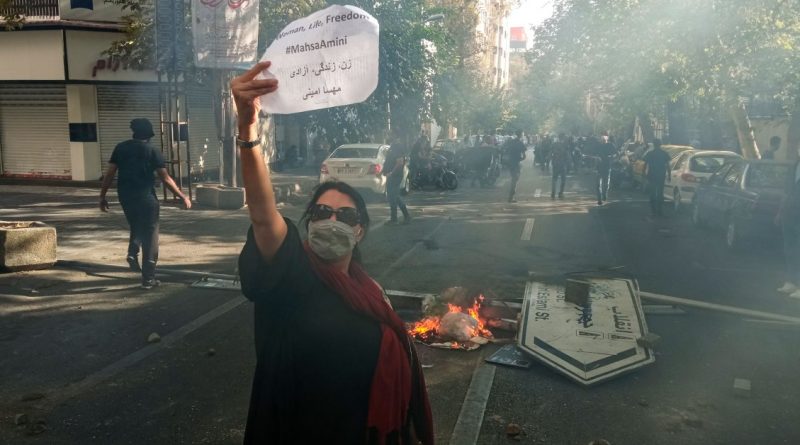 
In a country where a man’s voice has historically been louder, the women of Iran now lead the fight for change.

Over two weeks since the innocent death of 22-year-old Mahsa (Jina) Amini by the brutal forces of the Iranian regime’s morality police, the nation’s ever-present cry for change has been supercharged by the country’s fearless women and girls calling for individual, social, civil and economic reforms.

These unprecedented protests—the largest since the 2009 “green movement”—continue to be met by a systematic crackdown including the killing and arrest of hundreds of civilians, journalists, and activists. Among those detained are two young female journalists, Niloufar Hamedi and Elaheh Mohammadi, without whom the world would have never known about Amini’s horrific plight.

As Iranians move into the third of week of protests, dozens of students and civilians relived the horrific memories of July 1999 crackdowns, as government forces sieged the prestigious Sharif University complex on Sunday. This was followed a day after Iranians came together worldwide in show of defiance against the regime and in solidarity with Iranians inside the country.

“With every bullet fired and every arrest, the regime is shooting itself in the leg. The Iranian government wants to kill the messengers in order to conceal the truth—but for the Iranian people the truth is crystal clear,” a prominent journalist in Iran, who for security reasons asked not to be named, told me in a phone interview. “While we may not know how this will all end,” she added, “all know that we no longer want this governing system and regime.”

“A few nights ago, I saw two teenage girls near my home and on their way to join the protests,” the journalist said. “One told the other about her mother not wanting her to leave the house out of fear for her daughter’s life: ‘What difference does it make mom? The way things are at present, I don’t feel like I’m living anyway,’ the girl told her friend.”

The leaderless protests appear to be a generation that has seen siblings and parents choke in silence vehemently denouncing settling for that same life. These teens have witnessed the doomed protests of the past few years, parted with their older sisters and brothers who left the country in search of their dreams, and drowned in their parents’ suffering under economic hardship. Worse yet, they are confronted with a future that’ll be contained by the dark shadows of a patriarchal theocracy they find as antiquated as it is barbaric.

Their rage is youthful, female-led—and found common cause with an older generation of protestor (both men and women) who after decades of financial, social, and political confinement feel they have nothing more to lose.

“I was lucky enough to travel outside of Iran and experience some of the most basic and rudimentary experiences in life without an interfering force controlling every aspect of my life,” said a female entrepreneurship advocate and former university instructor and in Tehran.

“Today, there are millions of Iranians—especially women—who have suffered from the many corrupt, discriminatory, and demeaning policies of the regime. On top of all that, men and women are equally facing severe financial insecurity at the behest of the government,” she explained, underscoring how Amini’s death was a spark to an already inflamed society. “So as we say, there is no darker color than black. People—old and young, men and women—have nothing to hold onto anymore.”

For much of the world, the protests have been understood as the Iranian women’s opposition to the forceful hijab mandates or autonomy over their body. However, what’s taking place on the ground should not be reduced to the women’s compulsory wearing of the headscarf or the bodily rights. This is instead, about their fundamental call for freedom of choice.

At the time, this forceful mandate caused much affront and resistance in the society, and as I unpacked in the first chapter of my book, my own grandmother, whose family were far from conservative or religious, was asked by her grandfather to stay home for several weeks as her family was not yet ready to accept the forceful decree.

When the Islamic Revolution overthrew the Reza Shah’s son and last monarch of the Pahlavi dynasty, the decree went the other way—hijab becoming mandatory, and, of course, a major point of contention between the people and the new regime. For the past four decades, the world has seen a 3000-year-old civilization through the lens of a stifling regime, its nuclear weapons program, and didactic clergy that has so little in common with the majority of its 83 million population—in both practice and ideology—especially its women and even more so its youth.

But the current uproar is about much more than clothing. Women and girls in Iran are not risking their lives in hopes of wearing a mini-skirt to school or office. They are fighting tooth and nail to claim their freedom of choice and their right to live life as they please. Iranian women and girls are fighting side by side their fathers, brothers, and husbands (who for the longest time were presented to them as more superior), with the knowledge that their lives should not be defined by a militarized and corrupt theocracy.

To support the Iranian women on the ground, it is critical that the international community not regard Iranian women as victims. Rather, they are survivors of a gender-based apartheid state who—against all odds—have still managed to make tremendous strides in both public and private of life, which only reflect their exuberant zeal and readiness for change.

The Islamic Republic’s medieval rule have not succeeded in, like the Taliban, imprisoning the Iranian women and girls behind closed doors. Instead, they are louder, more vocal, and more aware of their rights. What’s unfolding in Iran right now is led by a capable generation of highly educated and globally-minded women and girls who see themselves as equal to their male counterparts, both at home and beyond.

As the world once witnessed the many Arab women courageously taking the front row in what became known as the Arab Spring, Iranian women too are collectively denouncing the many backward policies that have been holding them back for decades—all in hopes of tangible and long-lasting results.

Iranian men and women are all united in this fight; and while at present they may be struggling to find the leadership needed to bring their movement home, it’s essence is perfectly summed up in the chant taken up across the entire country: “Women, Life, Liberty.”