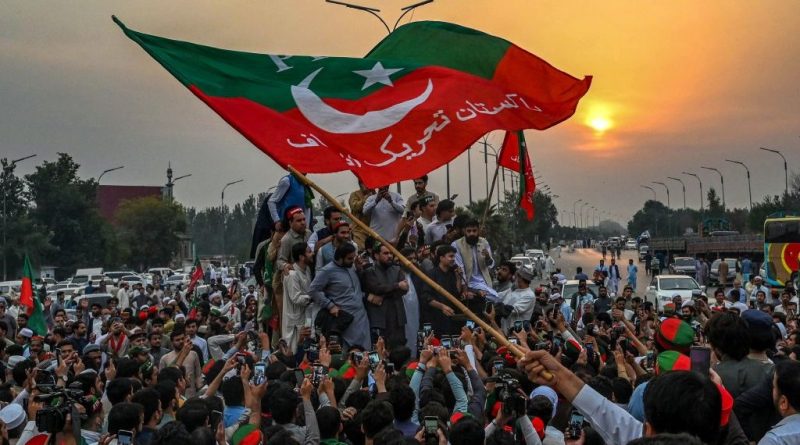 
How bad will things get? It’s the question everyone in Pakistan is asking following Thursday’s shooting of former Prime Minister Imran Khan, as the cricketing icon led a march on Islamabad to demand snap elections that could return him to power.

Khan, 70, was wounded in the shin when a gunman opened fire with an automatic weapon on his convoy of lorries and cars in the Wazirabad district in the east of Punjab province, the sound of gunfire crackling through a chorus of “Allah-Hoo,” a popular religious song, that was blaring through loudspeakers. One supporter was killed and seven more injured in the apparent assassination attempt, according to Punjab police. Khan has since undergone surgery on his leg and is said to be recovering well.

Protests have erupted across the South Asian nation of 230 million in response to the attack—which Khan blamed on a conspiracy between the government and Pakistan’s powerful military—with demonstrators blocking main roads and, in a marked escalation from previous flare-ups, even haranguing senior military figures.

“The political situation in Pakistan has been a powder keg for months,” says Michael Kugelman, the deputy director of the Asia Program at the Woodrow Wilson Center. “This attack could be what causes the powder keg to explode if calmer minds don’t prevail.”

In a statement issued through Asad Umar, secretary-general of Khan’s centrist Pakistan Tehreek-e-Insaf (PTI), the former Prime Minister accused Pakistan’s current leader Shahbaz Sharif alongside interior minister ​​Rana Sanaullah and director of counterintelligence Major General Faisal Naseer for orchestrating the attack. “I have prior information about the attack and I demand all three should be removed from their position. If they are not removed we will call a country-wide protest,” Umar said on Khan’s behalf, according to The Times.

Sharif of the center-right PML-N—also a brother of Khan’s longtime nemesis Nawaz Sharif—has denied involvement and released a statement on Thursday condemning the attack. The alleged assailant was apprehended at the scene and police released a video confession of a disheveled man alleging that he wanted to “kill Imran Khan because he claims prophethood by comparing himself with prophets.”

However, neither Khan nor his supporters accept that this was a lone gunman. Asked whether he believes Sharif was behind the attack, Fawad Chaudhry, former Information Minister for the PTI, tells TIME: “Of course, they were openly threatening Khan.” In response, some pro-PML-N supporters have accused the PTI of a false flag attack to boost Khan’s popularity.

Pakistan is no stranger to political violence. In 1951, its first Prime Minister, Liaquat Ali Khan, was shot dead at a gathering. Former Prime Minister Benazir Bhutto was assassinated in December 2007 in a gun and bomb attack during an election rally in the city of Rawalpindi. Following her death, Khan penned an op-ed for the U.K. Telegraph newspaper with the unfortunate headline: “Benazir Bhutto Has Only Herself to Blame.”

It’s unlikely that Khan will feel the same way about his own narrow escape. The PTI has become increasingly swathed in a victim complex following Khan’s ouster in a parliamentary no confidence vote in April, after a dozen lawmakers from his party defected in part over his embrace of Vladimir Putin during a visit to Moscow on Feb. 23 at the outbreak of the Russian President’s full-scale invasion of Ukraine. Khan has since raged—without evidence—about a U.S.-sponsored plot to unseat him. Social media teems with PTI supporters alleging that Thursday’s assassination attempt was a foreign plot to destabilize Pakistan. On Thursday, U.S. Secretary of State Antony Blinken released a statement condemning the attack, calling on “all parties to refrain from violence, harassment, and intimidation.”

That appears a vain hope. Pakistani politics has become increasingly nasty and vindictive, with several top PTI figures arrested and intimidated over recent months, while Khan himself has been slapped with various charges—including terrorism, over comments deemed threatening he made to the judge and senior policeman responsible for the arrest of an aide—that he claims are politically motivated. In the meantime, the nuclear-armed nation has been blighted by runaway inflation that reached 26% in October and floods that inundated one-third of the country, claimed over 1,700 lives, and caused an estimated $40 billion in damage. “It’s striking that given Pakistan’s economic crisis, given these terrible floods, the government has continued to target Khan and its supporters with retributive politics,” says Kugelman.

Still, Khan was guilty of needlessly antagonistic behavior before his own toppling, denouncing political rivals as “traitors” and taunting the powerful military—which has ruled Pakistan for half its 75-year existence—as “neutrals,” in a sardonic reference to their historical role as kingmaker. Last week, Inter-Services Intelligence chief Lt. Gen Nadeem Ahmed Anjum gave an unprecedented press conference—the first time the head of Pakistan’s spy agency has ever addressed the media—during which he accused Khan of duplicitously negotiating with the military at night while denouncing them during the day.

By feeding into Khan’s victim narrative, the attack undeniably boosts his ambitions of returning to power. Although Sharif does not constitutionally have to hold elections until August, millions taking to the street may force his hand. Khan’s party has gained seven seats in recent by-elections and has the political momentum behind him. But Pakistan’s elections commission in October also disqualified Khan from holding office for five years, amid allegations he sold state gifts and concealed personal assets—charges he denies. Even if Khan could run, who would win any such contest “really depends on who can mobilize the people,” says Samina Yasmeen, director of the Centre for Muslim States and Societies at the University of Western Australia. “At the moment, it’s heavily in favor of Imran Khan.”

Not that Pakistan’s problems would be over should Khan return to power. His first term was blighted by entrenched polarization and economic mismanagement compounded by global headwinds like the pandemic and soaring oil prices. And Khan’s injury also raises the stakes for his opponents since he would have no shortage of axes to grind were he back in office. The military, whose support was crucial to bring Khan to power in 2018, has already said that it would back Sharif’s government in case of widespread unrest. That is exactly what looks in store. “Let’s say people demonstrate a lot, there’s a lot of disturbances and political violence, would the military shoot at people?” asks Yasmeen. “The moment that happens it becomes a very different picture.”