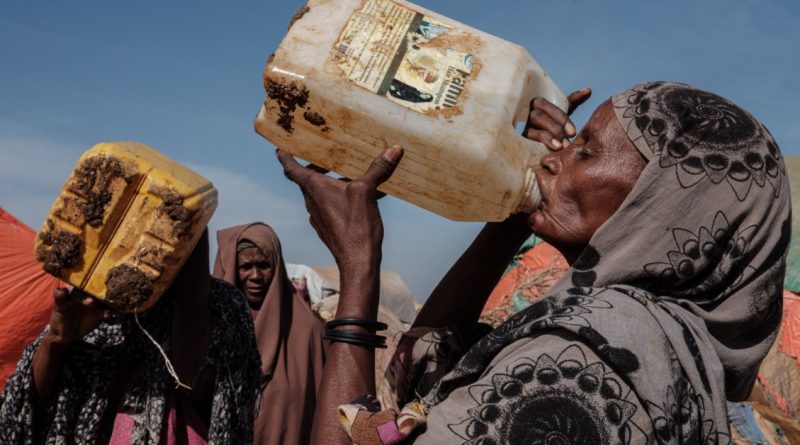 
After a series of particularly devastating famines in East and West Africa in the early 1980s—the ones that sparked the Live Aid concert and set Bono on his path from rock star to humanitarian dynamo—the U.S. set up an early warning system for when a region’s food supply was going to fail. The Famine Emergency Warning System Network or FEWS-NET, as it’s known, monitors such things as weather patterns, agricultural production, conflict and changes in humanitarian assistance, to give the wealthier nations and aid agencies timely information about likely crises. With enough awareness, the thinking was, there would be time to head off the worst ravages.

For several months now, that system has been sounding a major alarm about the situation in the Horn of Africa, which, after four failed rainy seasons over two years, is enduring the worst drought in recorded history, with no end in sight. Many aid agencies believe that a declaration of famine is imminent. Famine declarations are only made under extreme conditions: when a full third of a region’s children are severely malnourished, a fifth of the population has no access at all to food and there are two hunger-related deaths per 10,000 people each day. The only two famines ever declared were in South Sudan in 2017 and Somalia in July 2011.

Read More: Drought and the Ukraine War Are Pushing Somalia Toward a Catastrophic Famine

The warnings this time are not vague; they’re supported by reams of data: sophisticated rainfall measuring technology from the Climate Hazards Group InfraRed Precipitation with Station (CHIRPS) is predicting that there will not be enough rain in Somalia and nearby regions for the next few months to successfully grow crops for the fifth season in a row, which has not happened since the group first started collecting data. And the outlook for 2023 remains equally bleak. According to the Climate Hazards Center, “crop harvests in Kenya, Somalia, and southern Ethiopia have been and will remain very poor, more than 9 million livestock have perished [and] water resources have become extremely scarce.” In December of 2021 the International Rescue Committee (IRC) included Somalia on its annual watchlist, noting that the number of people in need increased 48% in a year. This year has been worse, it says. One of its clinics in Somalia saw acute malnutrition cases rise eightfold in four months.

Despite the precision and volume of the data, however, many Americans are unaware of the situation. A recent poll of Americans aged 19 to 34 conducted by the IRC and YouGov found that almost 70% did not even know there was a drought in East Africa until they took the survey. This is despite the fact that the U.S. has given over $700 million in aid to the region, more than the rest of the world combined. “This seems to be an invisible famine,” says Gayle Smith, CEO of One.org, and former U.S. Agency for International Development (USAID) administrator under President Obama. “It’s on the horizon, it’s happening. There’s been plenty of warning from the Somalia authorities, from NGOs from others. I think there’s some awareness, but it has not triggered the kind of international response that one would expect, and is in fact needed.”

The lack of awareness has surprised even longtime watchers of the region. “It has been, you know, third or fourth page news at best,” says Daniel Maxwell, the Henry J. Leir Professor in Food Security at the Friedman School of Nutrition at Tufts University, and a member of the Famine Review Committee for Somalia, who has also worked for humanitarian aid organizations in Africa for two decades. While there were huge public fundraising efforts for Darfur in the mid-2000s and Sudan in 2011, Maxwell says he doesn’t see any similar efforts for the region gaining the same sort of traction at the moment. “I don’t know what it is that captures the imagination of the public.”

Obviously, the war in Ukraine is dominating the attention of news outlets and international humanitarian agencies, especially those in Europe. But that’s not the only reason this famine is getting less attention than its severity warrants. Here’s what else experts think might be keeping this famine out of the public eye.

In 2011, when famine was declared in Somalia, the situation escalated to a critical point but only remained there briefly. This time—partly because of the early warnings— the situation is grinding inexorably on. December to March are the dry months in Somalia, and the 2023 rainy season is predicted to be sparse, which will send thousands more people off the land to gather in large camps, which could spark a breakout of disease or overtax the water supply and eventually lead to many more deaths than prior droughts. “I am concerned that if the the thresholds for famine aren’t breached, people will sort of pat themselves on the back and say, ‘Oh good, We averted famine!’” says Maxwell. “But we may not avert the kind of mass mortality that we saw last time just because of the magnitude of the problem and the likely duration of the problem.”

It’s not entirely due to a natural disaster

People understand and respond quickly to natural disasters like tsunamis and earthquakes, but famine is about more than bad weather and failed crops. A lot of the failures are social or economic in nature. Famine is usually comorbid with conflict. Somalia has been terrorized by militants linked to al Qaeda, decreasing the West’s ability—and appetite—to offer help. South Sudan has had a military coup. Ethiopia has also seen regional skirmishes. And the war in Europe has made unstable economies even less viable. Much of the food consumed in the Horn of Africa is imported. With the high price of oil, shipping food has become more complicated and expensive. Broken supply lines do not feel as urgent as crop failures. Yet they make a disastrous situation more perilous than it is has ever been. “When you put all those things together, it is probably the most severe combination of drivers [of famine], but also ones that are likely to last for a longer period of time,” says Maxwell.

Prevention is better than cure, but less urgent

During the famine in Somalia in 2011, a quarter of a million people died, half of them children, many of them before the famine declaration drew the world’s attention. The humanitarian sector vowed to take steps to head off such disasters in the future. But warnings speak of something that may happen, and it’s harder to direct hard-won funding if there’s any chance it won’t, in the same way that it’s harder to make time for a regular medical check-up than a visit to the ER. “Governments and international actors are still responding to the impacts of the drought, instead of managing the risk ahead of the drought,” says an Oxfam report from May, “and are struggling to take action at sufficient scale in response to early warning information.”

Some wealthy countries are struggling

Many aid agencies and some governmental organizations have tried to head off the disaster. The U.N. allocated $100 million in April. In July, the head of USAID, Samantha Power, said the agency would provide $476 million to address the crisis in Somalia. In September she added another $151 million. “We still have a narrow window of opportunity to stave off famine in the Horn,” she said. Later that month President Biden announced that the U.S. would contribute $2.9 billion to address the global hunger crisis, $2 billion of which was direct food aid. But other countries have not stepped up. “One of our key partners has been the U.K., which has unfortunately dramatically reduced its aid budget,” says Smith. “So there’s a deficit there.”

The amounts of money that have been donated so far sound huge enough that people could believe it’s enough to solve the problem. But money doesn’t go as far as it did in the past. “Food prices were already at at near record levels [in Somalia] even before the invasion of Ukraine,” says Maxwell. The international aid has helped, but “we’re still at a worse place now than we were in February.” At the same time as prices went up, people lost their livelihoods. Drought “reduces the value of anything that people have to sell to buy food—either livestock or their own labor,” says Maxwell. “So we’re at near historic lows in terms of people’s purchasing power.” At a recent IRC event, one of the Somalian fieldworkers noted during her presentation that Plumpy’Nut, the highly nutritious food used by Unicef and other aid organizations to feed people—especially children—in emergency situations had more than doubled in price from $50 per 15kg to $130—and that’s before the cost of transport.

There are too many disasters

Conflicts in Ukraine, Syria, Afghanistan, South Sudan and Yemen, the recent floods in Pakistan and the earthquake in Haiti, are taxing the world’s main providers of aid—and the world’s attention. “The fact of the matter is, we’re dealing with more crises than we ever have before,” says Smith. “And stretching the funding, I think, risks elongating the crises and failing to assist people we can actually reach.” Smith would like aid budgets to be bigger, although she knows that without a large show of public support, any increase is unlikely. “To mobilize the kind of response that’s needed, you not only need to activate and get the attention of governments,” she says, “you have to get the attention of the public.”

The attention economy is very fragmented

Back when LIVE AID was shown on TVs around the world, and even when Live 8, its followup, was staged in 2005, snagging a few key media outlets meant catching the eye of the millions of viewers, with headlines the following day for those who missed it. This year’s Global Citizen concert, featuring Mariah Carey and Metallica, was streamed on a long laundry list of outlets from Amazon Music to YouTube, but seemed to make very little dent in the Western news cycle. (The New York Post noted that House Speaker Nancy Pelosi had been booed.) And it too, had a long list of causes it needed to support. The looming famine was front and center at the companion concert in Accra, Ghana, but didn’t get much of a mention from the main stage in New York City. “We’ve got a very crowded media space,” says Smith “and we’ve got multiple issues on the international agenda and unfortunately, this falls near the bottom.”