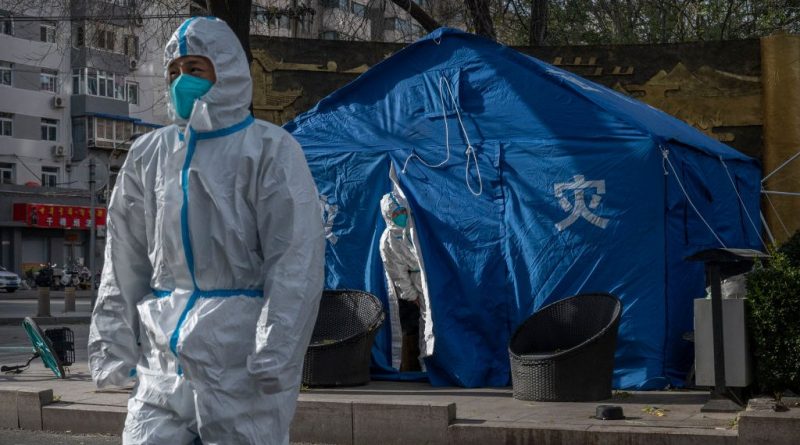 
Protesters in China have demanded an end to the country’s draconian zero-COVID policy—a pandemic prevention strategy that President Xi Jinping claims has kept his people safer than less stringent measures taken by other nations—as the suffering it’s wrought is becoming increasingly unbearable.

Experts have said it’s unlikely the government will outright end zero-COVID anytime soon, though it may continue to tweak the policy. But even if Xi wanted to ditch the strategy altogether, as some localities are reportedly starting to do, that could bring about even more misery.

Zero-COVID—defined by city-wide lockdowns, mass testing, and enforced quarantines—was once a paragon of the containment approach toward the coronavirus pandemic. To this day, Johns Hopkins University data shows China to have the lowest COVID-19-related deaths per capita worldwide. The country’s death toll, according to the World Health Organization, is only at 30,205, compared to the more than a million deaths in the United States—though questions have been raised about the accuracy of China’s official data reports.

Over nearly three years, however, the same measures meant to protect China and its people have also exacted a devastating toll. Residents in some areas have found themselves scrambling for food and other resources, and others have blamed zero-COVID for deadly delays in emergency responses. Mental health in the country has plummeted, while the economic fallout, domestically and globally, continues to grow.

It’s no wonder some Chinese people have expressed frustrations with zero-COVID. But experts suggest that ending the strategy now would invite a public health crisis. Focusing on containment for so long distracted the country from increasing vaccination rates—especially among its vulnerable elderly—and from investing in necessary healthcare infrastructure. Prolonged isolation has also stunted the population’s herd immunity.

And even if zero-COVID ended all of a sudden, analysts say the economy wouldn’t rebound right away, possibly taking months if not years to recover amid the turbulence of an expected surge in infections.

Donald Low, a public policy professor at the Hong Kong University of Science and Technology, describes this to TIME as one of the “great tragedies” of zero-COVID: “It led to a severe misallocation of resources and preparation of the things that they needed to do when they finally decided to transition out.”

Maintaining zero-COVID, however, not only threatens further damage to the lives and livelihoods of China’s 1.4 billion people, but it also risks undermining Xi’s legacy as public discontent festers. Observers believe any choice Beijing makes on handling COVID-19 moving forward may be headed for disaster. Says Low: “They created this trap for themselves.”

How China is ill-prepared for a reopening

Should zero-COVID be lifted, rather than live with the virus, millions could die from it. That’s because, although some 90% of the country have gotten vaccinated, China has relied on vaccines with lower efficacy at preventing critical illness, and it lacks adequate health care infrastructure to deal with an onslaught of hospitalizations.

Most residents in China are vaccinated with one of two homegrown COVID-19 vaccines using an inactivated form of the virus—one developed by Chinese biopharmaceutical company Sinovac Biotech and the other by state-owned Sinopharm.

But these traditional-type vaccines were found to provide less protection against infection compared to the mRNA-based vaccines from foreign firms. A 2021 peer-reviewed study in Brazil of those aged 70 and above found that the vaccine from Sinovac was only 55% effective at preventing hospitalization, and 61% effective at preventing death from COVID-19. By comparison, the Pfizer-BioNTech and Moderna vaccines offer more than 90% protection against hospitalization for older adults. The U.S. Centers for Disease Control and Prevention also found that getting at least two doses of mRNA vaccines is linked to a 90% reduction in risk of COVID-19-related death.

China, however, has refused to import foreign-made vaccines, as local firms pushed to develop their own mRNA-based COVID-19 jab. Walvax Biotechnology’s vaccine, which was approved for large-scale clinical trials in 2021, became the first Chinese mRNA vaccine to be approved for emergency use in Indonesia last September. Earlier this month, state media reported the Walvax jab is ready for public use, but China has yet to approve it.

According to the Financial Times, Chinese hospitals, which are cash-strapped and understaffed, could be overwhelmed by an influx of insufficiently vaccinated patients if the country were to experience an “exit wave”—the inevitable surge of infections after zero-COVID restrictions are eased.

A 2020 study found that China had just 3.6 ICU beds per 100,000 people (compared to, for example, Singapore’s 11.4 per 100,000), and improvements in the healthcare industry since then have lagged. Reuters reported in July that dozens of private hospitals have filed for bankruptcy in the past two years. Meanwhile, public hospitals, which account for 85% of the country’s patient demand, have seen significant numbers of medical personnel leave their jobs because of low earnings since the pandemic began.

Why China can’t hide from the virus forever

What happened in Hong Kong earlier this year may provide a chilling preview of what could happen in the mainland if the virus overtakes China’s COVID-19 controls. Hong Kong kept the virus largely at bay with social distancing measures, border controls, and mass testing for most of the pandemic. But overreliance on such measures led to complacency. In January, only about 25% of Hong Kong residents aged 80 and older had been vaccinated.

In early 2022, more contagious variants broke down the city’s defenses. For much of February to April, Hong Kong turned from pandemic success story to the place with the highest COVID-19 death rate in the world. Out of a population of 7.5 million, some 9,000 lives were lost in a 10-week period as Hong Kong appeared to be taken off guard, despite widely available vaccines and two years to prepare for the eventuality of a mass outbreak.

Chinese authorities say they’ve learned from Hong Kong’s mistakes. “The epidemic in Hong Kong has taught us a particularly profound lesson, as well as an example—that severe cases and deaths will be high if vaccination rates are low,” Wang Hesheng, vice-minister of the National Health Commission, told reporters in Beijing in March, according to the South China Morning Post.

But just over 65% of people aged 80 and above have been fully vaccinated and only 40% have received a booster shot, according to state-run media. Although authorities on Tuesday announced a campaign to increase vaccination rates among seniors, especially octogenarians, it may be too late. Even with zero-COVID still in place, on Wednesday, some places, like the capital Beijing, reported record case numbers as the country experiences a wave of infections.

The path forward from zero-COVID

Under Xi, China’s ruling party never communicated an end-game for zero-COVID. The country’s leader repeatedly declared a “war” on the virus without intimating any possibility of ever coexisting with it.

“Once zero-COVID was ideologized, there was no way any local governments could depart from that,” Low says, adding that this created a false sense of complacency among the Chinese public that the virus would eventually go away.

But while zero-COVID kept infections low for a long time, the strict measures also made people more susceptible to the virus, especially as new variants emerge, due to lower levels of natural immunity, says Catherine Bennett, an epidemiologist at Deakin University in Australia.

The dilemma Xi faces now is whether to double down on lockdowns—which are proving ineffective at preventing the current rise in cases and fomenting unrest—or to lift restrictive measures to appease protesters, and possibly welcome an even bigger surge of cases by doing so.

Either way, as infections continue to rise, Bennett tells TIME, the focus of the government needs to shift toward protection; in other words getting the vaccination rates up among vulnerable populations—and with effective vaccines.

That would require Xi admitting that the virus can’t simply be contained, which he may be reluctant to do as he staked his credibility to zero-COVID. However, such an admission, Bennett suggests, can actually bolster the government’s influence. The recent protests signal abidance by the pandemic rules is waning already, but if Xi links vaccination with opening up, she says, “people who’ve been relying on the government to keep them safe might now be more likely to go and have their vaccination updated or become vaccinated.”