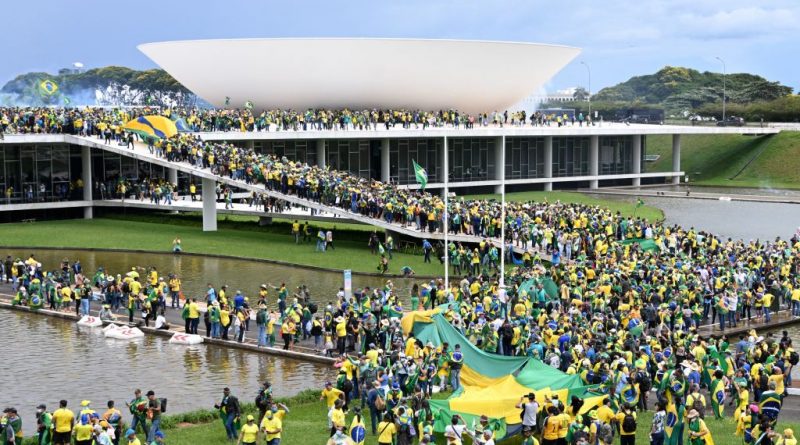 
When hundreds of supporters of former Brazilian President Jair Bolsonaro stormed the country’s government buildings on Sunday, Jan. 8, in an attempted coup, where was Bolsonaro? In Florida, it turned out.

Now U.S. President Joe Biden is facing pressure from congressional Democrats to expel Bolsonaro, who has for two months denied the results of Brazil’s presidential election.

Democratic representatives Alexandria Ocasio-Cortez of New York, Joaquin Castro of Texas, and Ilhan Omar of Minnesota are among those calling for Bolsonaro’s removal from the U.S. “Nearly 2 years to the day the US Capitol was attacked by fascists, we see fascist movements abroad attempJant to do the same in Brazil,” Ocasio-Cortez tweeted on Jan. 8. “The US must cease granting refuge to Bolsonaro in Florida.”

Biden had previously condemned Sunday’s riots on Twitter, calling them “an assault on democracy and on the peaceful transfer of power in Brazil” and affirming his support for Brazilian President Luiz Inácio Lula da Silva. Yet the White House has so far stayed silent on questions of whether it will seek to force the former Brazilian President out of the country.

Bolsonaro tweeted Monday that he had been discharged from a hospital in Orlando, Fla., after a medical procedure related to his 2018 stabbing.

While there is currently no evidence to suggest that Bolsonaro gave any direct order regarding Sunday’s insurrection, “there’s no doubt that Bolsonaro inspired those people … and what they wanted was to create a social chaos so that the army would intervene, throw Lula out and run a new ‘free’ election where Bolsonaro would win,” says Thomas Traumann, a political consultant in Brazil.

Is Bolsonaro in the U.S. to avoid prosecution in Brazil?

“Bolsonaro has kept himself at a safe distance,” says Gustavo Ribeiro, a journalist and the founder of English-language Brazilian politics site The Brazilian Report. “It may give him the argument of plausible deniability. He may say: well, I was not even here; how could I command those mobs?”

Bolsonaro also tweeted on Sunday that while peaceful demonstrations were part of a democracy, invasions of public buildings were antithetical to the rule of law. He has rejected allegations that he bears responsibility for the attempted coup.

Although Bolsonaro was not in Brazil as protesters demanded a military takeover, many analysts blame his rhetoric over the years for inspiring his supporters’ attacks. “Bolsonaro is directly responsible for what we saw,” says Ribeiro, “because he has for years pitted his supporters against democratic institutions [and] sown distrust in the electoral system.” Bolsonaro, he adds, “has essentially equated politics with corruption and instilled the sentiment that the only way to bring any progress to Brazil is by imploding the system.”

Read more: What Brazil’s Failed Coup Means for the Future of Its Democracy

In addition to possible charges being brought forth related to Jan. 8, Bolsonaro is already under investigation in at least four criminal probes, according to Reuters. They include allegations of using federal police to protect his son and spreading misinformation about the elections. “It’s very likely that he will face some legal comeuppance because there are multiple cases against him,” Ribeiro says.

Hundreds of supporters of Bolsonaro broke through police barricades and stormed into Congress, the presidential palace and the Supreme Court.

How would extradition and deportation work?

In order for the U.S. to extradite Bolsonaro to Brazil, a criminal charge and sufficient evidence to show probable cause is necessary, says Jacques Semmelman, an extradition specialist with the Katten law firm in New York. While Bolsonaro is under investigation for several criminal cases in Brazil, he has so far not been indicted in any of them.

If, after an extradition request is made, the U.S. concludes there is sufficient documentation to meet the requirements of its extradition treaty with Brazil, it would begin federal court proceedings to evaluate the request. If all avenues to appeal are exhausted, the matter goes to the U.S. State Department where the final decision regarding extradition rests with the Secretary of State.

Deportation—unlike extradition—does not require a criminal charge. Deportation is linked to foreigners who are admitted to the U.S. and violate certain terms and conditions upon which their stay is contingent, Semmelman explains.

It is possible that Bolsonaro entered the U.S. on an A-1 visa intended for foreign diplomats or heads of state. State Department spokesman Ned Price has not confirmed whether this is the case but has noted that this type of visa could lapse if the individual has a change in position, NBC News reported. In that case, the individual would need to apply for a change in status or leave the country.

What Does Bolsonaro Face Back Home in Brazil?

Whether Bolsonaro will face legal charges related to Sunday’s insurrection remains to be seen. Senators in Brazil’s Congress, which officially begins its session in February, have already started working on an inquiry to investigate the event, though it’s currently unclear whether they will have the votes for an official congressional investigation.

“Bolsonaro must return to Brazil, whether he wants to or not, to answer for his crimes and be interrogated on the terrorist acts he always incited,” said Senator Renan Calheiros of Alagoas, according to The Brazilian Report.

If and when Bolsonaro returns, there will be a lot for him to worry about. The popular leftist former president Lula has been sworn in and promised to punish any “vandals, neo-fascists and fanatics” involved in the insurrection.

Since Bolsonaro is no longer president he is more vulnerable to prosecution, Ribeiro says. As president, Bolsonaro could only be arrested if convicted by the Supreme Court. “Now, the threat exists because he’s fair game to prosecutors in lower courts.”