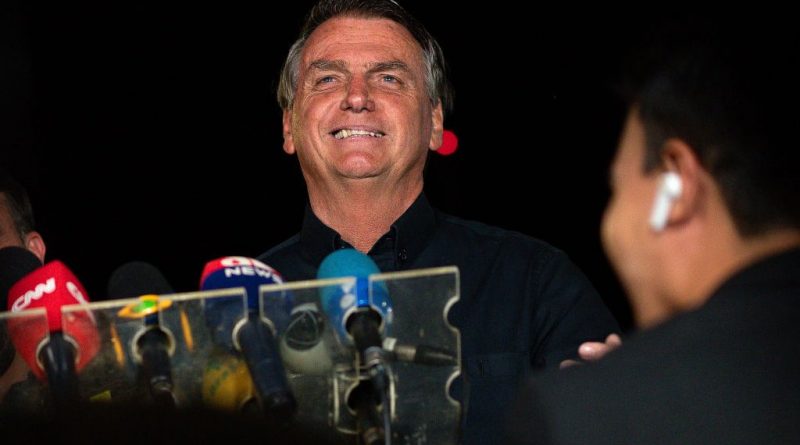 
It has become a familiar ritual for Americans, Brits, and others around the world: Tuning in on election night and wondering how the polls could have been so wrong, especially when it comes to undercounting voters on the right. On Sunday, it was Brazil’s turn, as right-wing President Jair Bolsonaro defied predictions of a double-digit defeat and came within just five percentage points of the first-place candidate, leftist former President Luiz Inácio Lula da Silva. The longtime rivals will now face each other in a runoff on Oct. 30 that looks closer than anyone expected—and seems likely to put heavy strains on Latin America’s largest democracy.

That Bolsonaro still has a chance to win came as a shock to both Brazilian and international observers. The so-called “Trump of the Tropics” presided over one of the world’s most calamitous reactions to the pandemic, calling COVID-19 “a little flu,” admonishing his countrymen to stop being “sissies,” and dragging his feet on vaccine purchases—Brazil’s official death toll now stands above 680,000 people, second only to the United States. His stewardship of the Amazon has been a disaster, with deforestation at its highest level in 15 years. On the economic front, Bolsonaro has been unable to meaningfully lift Brazil from a long malaise that has left its citizens 10% poorer on average than they were a decade ago. This story of stagnation and dissatisfaction has repeated itself to varying degrees across much of Latin America, which helps explain why incumbent presidents or their allies have lost 14 straight free and fair elections across the region.

And yet there was Bolsonaro on Sunday, basking in the glow of a result that, at the very least, kept his hopes of a second term alive for another four weeks. “We won against the lying pollsters and now we will win the election,” he declared to a crowd of supporters and journalists. Most political analysts believe that Lula, who governed Brazil from 2003 to 2010, remains a slight favorite to win the runoff—thanks to strong support from Brazil’s working class and a likely endorsement coming from the third place candidate Simone Tebet, a Senator. But there was no denying the wave of support that saw Bolsonaro’s allies make major gains in Congress, including his former women’s affairs minister, famous for declaring that “Boys (should) wear blue, and girls should wear pink,” who won a seat in the Senate. Bolsonaro’s former environment minister, who quit last year amid an illegal logging probe, also finished among the top five vote-getters nationally for Congress. Bolsonaro’s party will be the biggest in both chambers, spelling trouble for Lula’s agenda even if he is eventually elected.

How to explain the result? One explanation is that Brazil’s postcard image as the free-wheeling land of samba and Carnival—never quite accurate—is becoming more out of date with each passing year. Thanks in part to the spread of Evangelical Christianity, which has expanded since 1980 from less than 10% of Brazil’s population to about a third today, a culturally conservative revival of sorts has swept the country. Some 70% of Brazilians oppose legalizing abortion or drugs, while pluralities also oppose gay marriage and favor religious instruction in schools. Another explanation is that a booming agribusiness sector championed by Bolsonaro has become one of the country’s only reliable economic motors, which is why Amazon deforestation was a virtual non-issue for most Brazilian voters in this election. Sunday’s results also point to an urban-rural divide, with voters in major cities supporting liberal or leftist candidates like Lula, while those in small cities and rural areas favor a traditional, nationalist approach. If all this sounds familiar to a U.S. audience, it’s no accident: Brazil has since 2019 hosted its own annual version of the Conservative Political Action Conference (CPAC), the U.S.’s marquee event for the right. Trump released a video the day prior to the election endorsing Bolsonaro, calling him “one of the great presidents anywhere in the world.”

Read More: Exclusive: Brazil’s Most Popular President Returns From Political Exile With a Promise to Save the Nation

Brazil’s political class and mainstream media have consistently underestimated the strength and staying power of this rightward shift. Many treated Bolsonaro as a kind of historical aberration brought about by fake news and a series of scandals in the 2010s that disgraced traditional parties (and sent Lula to jail for nearly two years, until the charges against him were later overturned). The country’s most influential polls on average gave Lula an advantage of 15 points heading into Sunday; the final margin was just five. In the wake of the result, pollsters are trying to figure out whether their methodology was flawed, there was a last-minute shift of undecided voters toward Bolsonaro, or whether, as in other countries, right-leaning voters have been hesitant to reveal their true intentions to institutions they believe are biased against them.

Whichever the case, Lula and Bolsonaro are now locked in a final battle for votes that seems likely to leave deep, enduring scars. Bolsonaro, a former army captain, has repeatedly questioned the integrity of Brazil’s electronic voting system and said his opponent will only win if there is fraud. If the final result of the runoff is close, many believe Bolsonaro will try to challenge the outcome, perhaps by calling on his supporters, which includes parts of the military and police forces, to support him in the streets. Others insist such fears are overblown, and that Brazil’s democratic institutions, painstakingly built after the last military dictatorship ended in 1985, will stand up to any challenge. Even if that proves to be true, one thing is clear: After the events of recent years, no one should be underestimating Bolsonaro and bolsonarismo any longer.