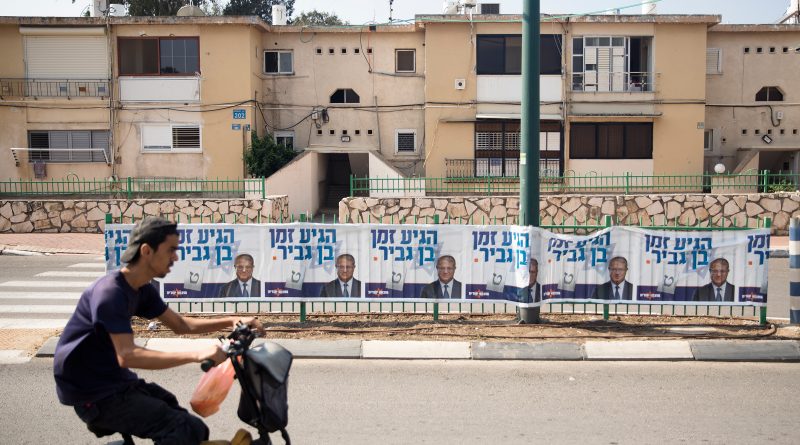 
As Israel braces for yet another election on Nov. 1—its fifth in less than four years—much of the focus has returned to one voting bloc: Palestinian citizens of Israel. Though they only make up about 1.9 million people, or about a fifth of the country’s 9-million strong population, Palestinian citizens of Israel, or “Arab Israelis,” are widely seen as the key to breaking the entrenched political deadlock and preventing the right-wing Benjamin Netanyahu, Israel’s erstwhile and longest-serving leader, from regaining power.

It’s a curious position to be in for the country’s Palestinian minority, made up of those who managed to remain on their land following Israel’s establishment in 1948, during which roughly 700,000 Palestinians were uprooted from their homes in what they refer to as the Nakba—or “the Catastrophe.” (Around 4.8 million Palestinians live in Gaza and the occupied West Bank but they are not Israeli citizens.) That’s particularly the case at a time when Israel’s Palestinian minority faces rising discrimination and demonization from the ascendant ultra-nationalist right. Itamar Ben-Gvir, a once-fringe gun-toting firebrand who has called for expelling “disloyal” Arab citizens from the country, is poised to lead the third-largest party in Israel’s parliament, the Knesset, after Tuesday’s vote. It’s a position that could land him in government alongside Netanyahu.

“I am very concerned that if the right-wing will control the state, they will use their power against the Arabs in Israel,” says Shahira Shalabi, a Palestinian city councilor in the northern port city of Haifa. “If they control the country, we will be their first victims.”

But as election day approaches, averting Ben-Gvir’s rise or Netanyahu’s return is not the only thing on the minds of Arab voters. This contest comes just over a year after a historic alliance was formed between the centrist (and current Prime Minister of Israel) Yair Lapid, the religious ultra-nationalist Naftali Bennett, and the Arab Israeli legislator Mansour Abbas—one that ultimately resulted in Abbas’s United Arab List becoming the first independent Arab party to enter an Israeli governing coalition. At the time, the move was seen as a potentially redefining moment in Arab-Jewish relations and an opportunity for Arab Israelis to have real influence in a political sphere that had long excluded them.

For them, the upcoming election will be a referendum on that coalition and whether the Israeli government can ever truly be representative of all its citizens.

A man rides by a ‘Jewish Zionist’ party campaign poster showing party member Itamar Ben-Gvir on Oct. 27 in Or Akiva, Israel. Israelis return to the polls on Nov. 1 for a fifth general election in four years.

The matter of Arab Israeli turnout

If early Palestinian turnout projections are any indication, many voters are unhappy. Recent polls suggest only 49% will vote—more than last year’s 44.6%, but markedly lower than 2020’s 63.5%. The 2020 turnout resulted in a record-breaking 15 seats for Arab lawmakers in the Knesset. Samer Swaid, the director of the Arab Center for Alternative Planning whose get-out-the-vote campaigns helped increase Arab turnout, says that the ultimate goal is to achieve proportional representation. “We are 17% of the Israeli citizens and we want to be 17% of the members of the Knesset,” he says, which corresponds to roughly 20 seats. Arab parties currently claim 10.

An alliance between the country’s four ideologically-disparate, predominantly-Arab parties known as the Joint List allowed it in 2020 to emerge as the third-largest faction in the Knesset. But the unity didn’t last: Ahead of the 2021 election, Abbas’s United Arab List (an Islamist party known by its Hebrew acronym Ra’am) decided to quit the Joint List over ideological disagreements, including its willingness to entertain cooperation with Netanyahu.

As a result, Arab voter turnout took a hit. “When they break up, their turnout goes down and when they get back together, their turnout goes up—it’s very clearly correlated,” says Dahlia Scheindlin, an Israel-based pollster and political strategist. “It’s very closely connected to the question of whether their vote has efficacy because they think that if they are together, they will be more powerful.”

But if there is lower turnout this time around, the United Arab List’s brief stint in government may also be a factor. Abbas defended his taboo-breaking decision to enter the coalition as a rare opportunity to improve the conditions of Arab Israelis. It was an ambitious promise, and one that could hardly be achieved in a year. And in the run up to the election, he doesn’t have a whole lot to show for his efforts.

The United Arab List’s primary achievements included securing $10 billion in funding for the Arab community over five years as well as the passage of an electricity bill paving the way for tens of thousands of Palestinian homes, which are deemed illegal as they were built without Israeli permits, to be connected to the country’s electric grid. But only a fraction of the money earmarked for the Palestinian community was spent by the time the government fell in June; most of these homes are still unable to access electricity.

For Thabet Abu Ras, the co-executive director of The Abraham Fund Initiatives, an NGO focused on Jewish-Arab equality, the past year of Palestinian representation in government was bittersweet. On the one hand, it provided the community with “a kind of political legitimacy” and some tangible wins; on the other, it coincided with a terrible year of rising violence and demonization of Palestinians. Indeed, this past year has already gone down as one of the deadliest for Palestinians living in the occupied West Bank; at least 100 people have been killed amid an uptick in Israeli military raids in the Palestinian territories. The vast majority of those deaths were the result of shootings by Israeli security forces—most notably the killing of the Palestinian American journalist Shireen Abu Akleh. The violence didn’t go unnoticed by Arab Israelis, many of whom, like Abu Ras, have family in the occupied West Bank or Gaza.

In government, Abbas explicitly declined to comment on the big issues—the occupation and settlement expansion in the West Bank, the 15-year blockade of Gaza, and the defunct peace process—in favor of focusing on the material needs of Arab Israelis. “He ignored the national discourse and just focused on daily life issues: combating crime and violence, bridging the gaps between Arabs and Jews, which is important,” says Abu Ras. “However, it’s not enough for us.”

To Abbas’s fiercest Palestinian critics, the problem wasn’t just that he skirted major issues; it was that he failed to block—and, in some cases, even lent his support—to legislation perpetuating the status quo. That includes the renewal of a draconian law banning Palestinians from the occupied territories who marry Israeli citizens from acquiring permanent residency or citizenship in Israel, thus forcing thousands of families apart.

“They stopped talking about major political issues and are talking only about how to get more budgets for the Arab population, as if our only problem is getting budgets,” says Aida Touma-Sliman, an Arab Israeli lawmaker for the left-wing Democratic Front for Peace and Equality (known as al-Jabha or Hadash in Arabic and Hebrew, respectively). As she sees it, it’s impossible to separate bread and butter issues such as housing and electricity from the Israeli-Palestinian conflict because land ownership is central to both. Abbas’s experience in government set Arab Israelis “a few steps backwards in our struggle to win equal citizenship and fundamental rights, not only on a civil level but also on a national level.”

The internal debate going on among Arab Israelis today is what to do next: Should their parties join or not join the government if it means keeping Netanyahu out? Should they even be voting at all?

According to Abu Ras and Scheindlin, only a small fraction of Arab Israelis believe in boycotting the elections for ideological reasons. If more of them choose to stay home on Nov. 1, it’ll be because many of them feel burned by the disunity of the Arab parties and an Israeli political establishment that seems at best indifferent and at worst hostile to their place in society. “They want to influence the decision-making process, they want to be part of it,” says Abu Ras. The problem, however, is that many Arab voters don’t see how they can. A recent survey of Arab Israelis by the Israeli Democracy Institute found that more than half said that they don’t believe that voting will change their situation.

“We’re never going to be the ruling party, and that’s actually not the aim,” says Diana Buttu, a Palestinian analyst and lawyer based in Haifa, referring to Arab representation in Israel’s government. “The aim is to try to lessen the damage as much as possible,” by having enough lawmakers to block laws that negatively impact them.

This is hardly an enticing pitch to Arabs on the fence about voting. But as some Arab Israelis see it, they don’t have the luxury of sitting these contests out. “As part of our resistance and sumud (“steadfastness”), we must vote,” says Rawia Aburabia, an assistant professor at Israel’s Sapir Academic College School of Law, referencing the Palestinian idea of resilience. “Even if now our citizenship is a hollow concept, we don’t have the privilege just to give it up. We are citizens and we are Palestinians and we have to fight for it. Especially now with Ben-Gvir and this extremist discourse, we have to resist.”

The prospect of a government including Ben-Gvir and Netanyahu could serve as an impetus for greater Arab turnout. That, at least, is what relatively moderate Israeli leaders such as Lapid are counting on. In a meeting with Arab municipal leaders in Nazareth this week, the Prime Minister warned that if Arab Israelis don’t vote, “what was given in the past year will be taken from them.”

Yet Arab Israelis won’t settle for being a political tool to block Ben-Gvir or Netanyahu. If Israeli leaders want them to vote, they need to be made to feel as though their voices really matter. “They are not coming with inclusive, positive messages toward the Arabs,” says Abu Ras.

When asked what kind of messages she will be taking to Arab voters in the final days leading up to the election, Touma-Sliman says that the first will be to try and imagine waking up the day after the election knowing that, because they voted, Ben-Gvir and Netanyahu will be unable to form a government. The second will be to remind them that “we never gave up.”

“We were in a very, very difficult situation in 1948. We were in a very difficult situation under military rule,” adds Touma-Sliman, referencing the period from 1948 to 1966, during which time Palestinians in Israel lived under military rule much like the system that exists today in the occupied West Bank. “We managed to create struggles that brought us to a better situation. Today’s struggle is really an easy one for you—it is to go out and to vote.”