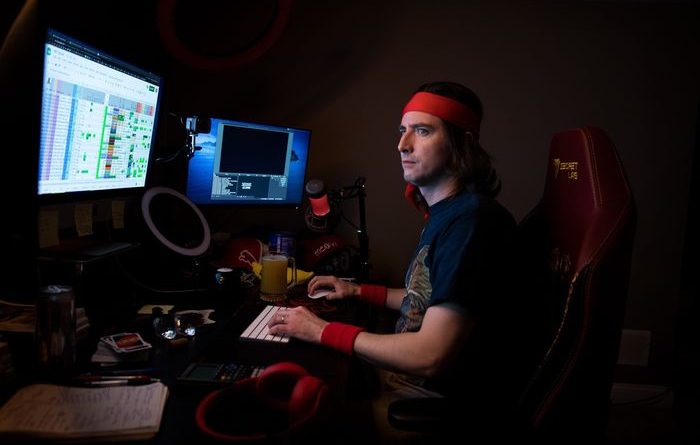 When Reddit became the rowdy center of the investing universe last January, its co-founder

called the frenzy a “revolution” and a “chance for Joe and Jane America, the retail buyers of stock, to flex back and push back.” Maybe one day, he mused, the members of Reddit’s WallStreetBets forum could do more than just ambush hedge funds–they could outperform those highly-paid investors.

The rookies who transformed videogame retailer

into the hottest stock on the planet thought they had a twofer: sticking it to Wall Street while making a bundle themselves. But the revolutionaries didn’t do a good job on either count. The share price hovering over Mr. Ohanian’s shoulder during his Jan. 28, 2021 CNBC interview would be almost as high as it got. GameStop’s value tumbled by nearly 90% over a week even as a bunch of already-rich people on Wall Street and in corporate boardrooms got even richer. A spokeswoman said Mr. Ohanian was not available to comment.

Some hedge funds earned millions by mimicking the bet made by the Reddit renegades. Companies that executed trades, such as Citadel Securities and Robinhood Markets Inc., booked huge profits from the flurry of activity. Even many company insiders sold their shares.

The GameStop surge was often portrayed as a triumph of amateurs over professionals, fueled by social media. Tips posted on Reddit’s WallStreetBets forum were quickly amplified over TikTok,

and messaging platform Discord, allowing hordes of individual traders around the world to act in concert and even drive markets. They circulated memes showing images of their favorite companies superimposed on the surface of the moon, representing how high they wanted the stock to climb. They said they wanted to defy the hedge funds that bet against these stocks.

Some of those small-time investors did make money as WallStreetBets ballooned from fewer than 2 million members at the start of January 2021 to more than 11 million. One was Keith Gill, aka “Roaring Kitty,” who became a hero to Reddit users while personally earning tens of millions of dollars. And some on Wall Street fared poorly.

hedge fund Melvin Capital lost a whopping $6 billion in January 2021, The Wall Street Journal reported, and some other funds suffered heavy losses too.

When the smoke cleared, though, the popular image of tables being turned on America’s financiers wasn’t entirely accurate. Individual investors who bought GameStop this time a year ago and never sold are sitting on hefty losses.

The meme stocks that took off a year ago were struggling operations before their turn in the spotlight. But when their share and option prices reached silly levels, many longtime professional investors piled in.

One veteran who said he made millions on GameStop was

the retired “bond king” and former star manager at California money management giant Pacific Investment Management Co. As the GameStop frenzy was reaching a fever pitch, the billionaire said his “heart has been with Main Street for many years.” He also warned investors betting on options that they were “fish at the poker table” and “not part of an educated investment mob.”

Mr. Gross personally sold stock options when the Reddit investors were buying them. It wasn’t a sure bet. Mr. Gross said in a Wall Street Journal podcast last year he was down $10 million at one point before emerging with a $10 million gain as GameStop’s shares nosedived.

Others were in the right place at the right time. John Broderick, an activist investor who runs Permit Capital, acquired a big stake in GameStop and lobbied for fellow fund manager

of Hestia Partners to be given a seat on the troubled retailer’s board in June 2020, according to a person familiar with the situation. When the price spiked, Mr. Broderick reaped a bonanza, this person said.

“It’s sort of like after the Super Bowl when they ask someone how it feels and they say it doesn’t feel real,” Mr. Broderick told The Wall Street Journal in Feb 2021. “I guess I can go to Disney World.”

New York hedge fund Senvest Management also got interested in GameStop in early 2020 and bought 5% of the company’s shares during September and October, The Wall Street Journal previously reported. Its managers had been on the losing side of short squeezes in the past. They didn’t hesitate to cash in when this one hit, according to the Journal’s reporting, reaping a profit of $700 million.

Even sleepy mutual fund firms seized the opportunity. Mutual-fund giant Fidelity Investments, which had been GameStop’s largest shareholder with a nearly 13% stake, sold nearly every share it owned in January 2021, according to public filings. The Fidelity Low-Priced Stock Fund and the Fidelity Series Intrinsic Opportunities Fund, which generally favor dowdy but solid companies that fast-money retail investors ignore, had been the two big holders of GameStop shares at the giant investment firm.

One winner from the meme-stock squeeze,

seemed like the sort of Wall Street figure the Reddit revolutionaries would love to hate: smart, good looking and rich. A decade earlier, he was ranked No. 6 in Business Insider’s “Sexiest Hedge Fund Managers” poll.

another meme stock. The distressed-company specialist provided expensive cash to AMC that could be converted to shares. When the stock surged, he banked a huge gain, extinguishing the debt. Yet he also bet against the meme stocks when he thought they had gone too far, selling call options, as Mr. Gross had, for an additional profit. His fund had its best month ever.

Four months later, when AMC’s shares rose again, Mudrick returned for an encore that wasn’t as popular with the Reddit crowd. AMC sold him $230 million in newly issued shares that he almost immediately sold at a higher price as retail investors pushed the stock to its highest level in years, The Wall Street Journal reported. He attracted their ire by being quoted saying that he sold because the stock was overvalued.

He didn’t always win, either. In June Mudrick’s flagship fund lost about 10% in just a few days as a jump in AMC’s stock price unexpectedly triggered changes in the value of derivatives the fund held as part of a complex trading strategy, The Wall Street Journal reported.

Firms that stood in the middle of all this buying and selling benefitted while taking less risk than some other winners. One trading app, Robinhood, laid the foundation for a craze that nearly overwhelmed it by attracting millions of mostly young people drawn by no-commission trading and lottery-like stock giveaways.

It almost worked too well; Robinhood briefly halted purchases of several meme stocks and had to quickly raise more than $1 billion in January 2021 to help meet rising demands for cash stemming from all the frenzied trading. But it survived and made almost twice as much revenue that quarter as it had in all of 2019. The broker went public months later, making co-founders

“We’re proud to have made investing more affordable for a new generation, paving the way for our commission-free model to be adopted industrywide,” said a Robinhood spokeswoman. “Gifting people stock for sharing Robinhood with their friends isn’t just a reward, it helps first-time investors see themselves as owners. We reject the idea that it’s ‘investing’ if you’re wealthy, but ‘gambling’ if you aren’t.”

Robinhood, in turn, created opportunities for other financial giants such as Citadel Securities, the electronic-trading firm largely owned by hedge-fund billionaire

Citadel Securities executes many of the orders submitted by small investors through Robinhood–as well as other online brokerages such as TD Ameritrade. It pays Robinhood for the right to execute Robinhood customer orders, and Mr. Griffin’s massive computers fill them in nanoseconds by making many small, calculated bets that can add up to billions in profits.

Mr. Griffin, in testimony before a U.S. House committee last February, said he played no role in the controversial decision by Robinhood to curb trading in GameStop at the height of the stock’s rally. And why would he have? On Jan. 27, at the height of the GameStop rally in 2021, Citadel Securities executed 7.4 billion shares of trades for retail investors. That was more than the average daily volume of the entire U.S. stock market in 2019, Mr. Griffin said.

When GameStop’s stock skyrocketed in January 2021, it caught Wall Street investors by surprise. A group on the Reddit forum WallStreetBets had coordinated stock buys to bolster the fading videogame retailer’s stock price. On Jan. 27 at 1pm ET, join the reporters who drove the coverage for a discussion of this moment in investing history.

Some of the biggest banks on Wall Street were also part of the frenzy.

the broker for “Roaring Kitty” and millions of other smaller investors after buying E*Trade in 2020, doubled its net profit in the first quarter of 2021 to $4.1 billion.

said at a virtual conference in February 2021. The number of trades made by E*Trade clients, he added, was “off the charts.”

rode the same wave. It earned $6.8 billion during the period for its highest return on equity in 12 years.

said at the time.

A year later certain GameStop insiders are gone, and some shared in the same meme-stock bounty. GameStop’s senior executives who left the company in the months following the stock surge reaped exit packages worth $290 million at the time, The Journal reported. That is more than the entire company had been worth before it was noticed by WallStreetBets.”

Reddit, the company that was the staging ground for the revolt of amateur traders, also did well. It went from a private valuation of $3 billion in 2019 to $10 billion last summer after WallStreetBets helped to raise its profile. It has filed for an initial public offering.

told The Wall Street Journal that he would like to see retail investors, normally shut out of juicy deals, participate in the IPO.

Wall Street is still expected to be involved. The offering is being lead-managed by Goldman Sachs and Morgan Stanley.

Write to Spencer Jakab at spencer.jakab@wsj.com