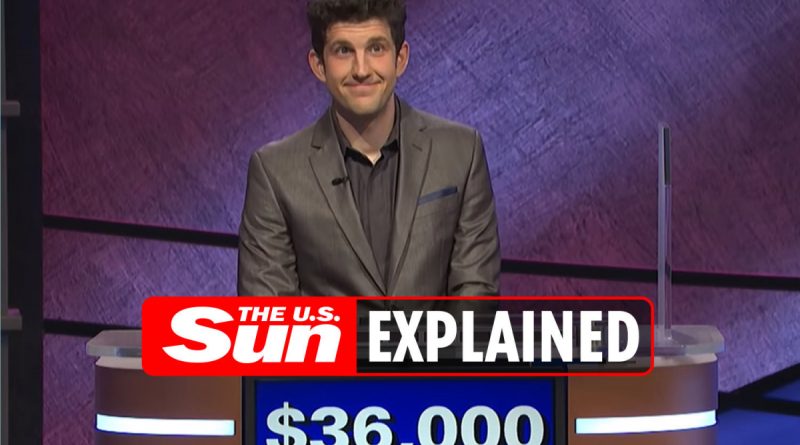 JEOPARDY! contestant Matt Amodio has been lighting up the competition on the game show, winning 10 straight matches as champ.

Despite his impressive streak, some Jeopardy! fans have a problem with how Amodio plays.

Who is Jeopardy! contestant Matt Amodio?

According to his Twitter bio, Amodio is a Ph.D. student at Yale University studying computer science.

The Ph.D. student is a “Lifelong Jeopardy! fan,” per his Twitter profile.

Despite being a “lifelong” fan of American’s favorite game show, Amodio said he never would’ve auditioned for Jeopardy! if it wasn’t for his parents.

“I was only reluctantly trying out because I didn’t think I would make it, and even if I did make it, I wouldn’t be very good,” Amodio told Entertainment Weekly.

“I only tried out at the behest of my dad, who insisted, as any parent would, ‘My son is awesome. He would do so well.’ And so I said ‘Fine, I’ll do it for you.'”

How much has Matt Amodio won so far on Jeopardy!?

Amodio has become one of the top Jeopardy! earners to date, raking in over $310,000 in winnings so far.

He said that before he came on the show, he watched Ken Jennings for pointers and listened to everything the reigning Jeopardy! king had to say on the show.

“I think that my strategy going in was watch Ken [Jennings] and try to do whatever Ken does. I would just take any notes I could from him,” the Ph.D. student said.

Amodio said he wasn’t expecting to win a single game at all, but now he’s won 10 in a row.

Winning these challenges, he said, is almost “addictive”.

“Once I won one, I wasn’t sitting on my laurels or anything. I said, ‘You know, that was good. Let’s do it again,'” he told EW.

“I went into a full day of taping saying, ‘This is just the dream. I can’t believe I have the opportunity to do this.’ … Each step of the way, I was just kind of amazed that it kept going.”

Why are fans upset at how Amodio plays the game?

Amodio has seemed to annoyed Jeopardy! fans with his habit of saying “what is” for every response.

However, in response to the outrage from some viewers, Amodio said that he meant no disrespect to fans.

“I hope nobody’s offended by it,” he told WE.

“I do hear some people say that it’s disrespectful to the game, and I would counter that if there was a Jeopardy! fan club ranking, I think I would have a strong case to be number one Jeopardy! fan.

“I live and breathe the show, I love every aspect of it, and so I’m definitely not doing it out of any disrespect or undermining of the show.”

Despite irking fans with his “What is” response, the show’s official Twitter account clarified there is nothing wrong with his answers and they are totally within the rules of the game.

“The rules state, ‘…all contestant responses to an answer must be phrased in the form of a question.’ It’s that simple,” reads a July 30 post on the show’s website.

“‘Jeopardy!’ doesn’t require that the response is grammatically correct.”