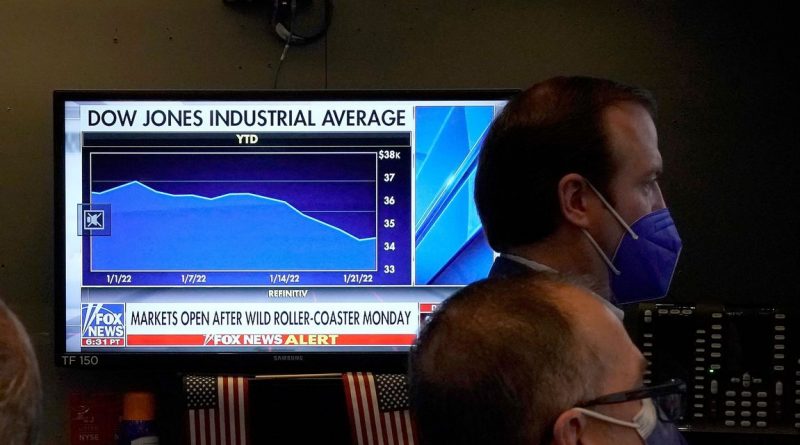 Is it time to bail out of stocks and bonds? This isn’t the market that investors likely signed up for back in 2021 when shares in GameStop Corp.
GME,

were headed to the moon, drawing in droves investing neophytes.

The meme-stock frenzy, the one underpinned by social-media chatter as opposed to fundamentals, has fizzled, at least for now. Highflying technology stocks that could change the course of the world have been under pressure, as benchmark bond yields turn up with the promise of a Federal Reserve that is closing the purse-strings of too-loose monetary policy.

Economists and market participants are predicting three, four, maybe as many as seven interest-rate increases, of about a 0.25 percentage points each, this year to tackle inflationary pressures that have gotten out of hand.

Read: What to expect from markets in the next six weeks, before the Federal Reserve revamps its easy-money stance

The upshot is that borrowing costs for individuals and companies are going up and the cheap costs of funds that helped to fuel a protracted bull market is going away.

Those factors have contributed partly to one of the ugliest January declines in the history of the technology-heavy Nasdaq Composite Index
COMP,
,
which is down nearly 12%, with a single session left in the month, leaving one final attempt to avoid its worst monthly decline since October of 2008, FactSet data show.

Check out: Is the market crashing? No. Here’s what’s happening to stocks, bonds as the Fed aims to end the days of easy money, analysts say

What’s an investor to do?

Jason Katz, senior portfolio manager at UBS Financial Services, says that he’s had an “increased volume of hand-holding calls” from his high-net worth clients.

Katz said he’s telling investors that “it’s not about exiting the market now but making sure you are properly allocated.”

“It’s not a systemic problem we have in [financial markets], it’s a rerating,” of assets that fueled a speculative boom.

“You had a whole constituency of investments that should have never traded to where they did,” Katz said, “Aspirational stocks, meme stocks…all fueled by fiscal and monetary stimulus and this year it is about a great rerating,” of those assets, he said.

Art Hogan, chief market strategist at National Securities Corporation, told MarketWatch that losses come with the territory of investing but investors tend to feel it more acutely when stocks go down.

“It is our nature to feel losses more sharply than we enjoy gains. That is why selloffs always seem much more painful than rallies feel pleasurable,” Hogan said.

It is always important to note the difference between investing and trading. Traders purchase assets for the short term, while investors tend to buy assets with specific goals and time horizons in mind. Traders need to know when to take their losses, and live to trade another day, but investors who usually have time on their side need to invoke different tactics.

That is not to say that investors shouldn’t also be adept enough to cut their losses when the narrative shifts but such decisions should hinge on a change in the overall thesis for owning assets.

Hogan said that investors considering bailing on markets now need to ask themselves a few questions if they are “afraid.”

“’Have my reasons, for investing changed?’”

“’Have my goals changed? Has my time horizon for the money changed?,’” he said.

“Most importantly, ask yourself the question: ‘Am I skillful enough to get back into the market after the average drawdown has occurred,’” he said. “They certainly, don’t ring a bell at the [stock market] bottom,” Hogan said.

Data from the Schwab Center for Financial Research, examining a group of hypothetical investors over a 20-year time period, also supports the idea that being out of stocks, and in cash, for example, is unlikely to outperform investing in equities, even if investors were badly timing the market.

“The best course of action for most of us is to create an appropriate plan and take action on that plan as soon as possible. It’s nearly impossible to accurately identify market bottoms on a regular basis,” according to findings from Schwab’s research.

To be sure, the market going forward is likely to be tough sledding for investors, with some speculating about the possibility of a recession. The Russell 2000 index
RUT,

entered a bear market last week, falling at least 20% from its recent peak. And the yields for the 10-year
TMUBMUSD10Y,

have compressed, usually viewed as a sign of an impending recession if the yields for shorter dated bonds rise above those for longer maturities.

And the rest of the stock market, looks fragile, even after a Friday flourish into the close, other equity bourses are looking at big monthly losses. Beyond the Nasdaq Composite, the Dow Jones Industrial Average
DJIA,

Katz said that he’s advising many of his clients to look for quality stocks. ”

“High-quality growth and tech names have been wearing the black eye for [speculative tech], but “those [quality] stocks are starting to find their footing,” he said.

That said, wild intra and interday price swings are likely to continue to be a feature of this phase in financial markets, as the economy transitions from the COVID-19 pandemic and toward a regime of higher rates.

But slumps don’t necessarily mean the end of the world.

Hogan said that downturns also can be viewed as opportunities.

“Volatility is a feature not a bug, and the price we pay for the long-term higher average returns in the U.S. equity market,” he said.