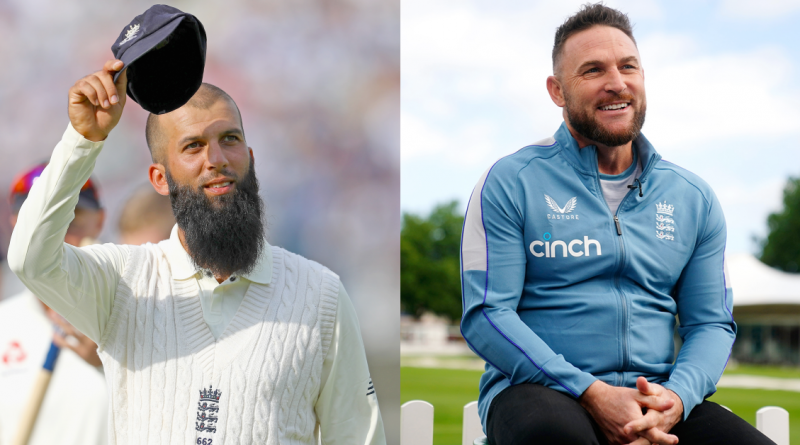 
Star England National Cricket Team all-rounder Moeen Ali has said that he is ready to come out of retirement from Test cricket if England’s Test head coach Brendon McCullum needs him in the squad for the Pakistan tour later this year.

Moeen Ali announced his retirement from the purest format of the game last year. However, since the appointment of Brendon McCullum as England’s Test coach Moeen has shown interest in ending his retirement.

Before announcing his retirement, Moeen Ali played 64 Test games for the England National Cricket Team and scored 2914 runs at an average of 28.3 and a strike rate of 51.1.

Also, with his off-spin bowling, he bagged 195 wickets in the longest format of the game at an economy of 3.61 and an average of 36.7.

I find it very hard to say no to him, He scares me a little bit – Moeen Ali on Brendon McCullum

The 34-year-old all-rounder, during a commentary stint on BBC’s Test Match Special on Saturday, said that he is ready to join England’s Test squad for the Pakistan tour this winter.

“When, or if, (England head coach) Baz McCullum wants me, I’ll definitely play in Pakistan,” he said.

He added that he has played the Pakistan Super League (PSL) in Pakistan but travelling with the England team will be a different feeling altogether.

“I have played Pakistan Super League out there a few years ago but it’s not the same, to travel with an England side there having family background from that part of the world will be amazing. It would be a historic event because of England not touring there for so many years.

“I know the support and love you can get out there, they love cricket. It’s really something that’s very appealing for sure,” he said.

Moeen Ali further said that he finds it hard to say no to the newly appointed England coach McCullum.

“I find it very hard to say no to him. He scares me a little bit. We’re going to have a chat and see how it pans out. At the time I said I was retired I felt like I was done. I felt really tired with cricket,” he said.

Also Read: IND vs SA: If We Did Well, Then You Would Have Hailed His Decision-making Skills – Bhuvneshwar Kumar Backs Under-fire Rishabh Pant