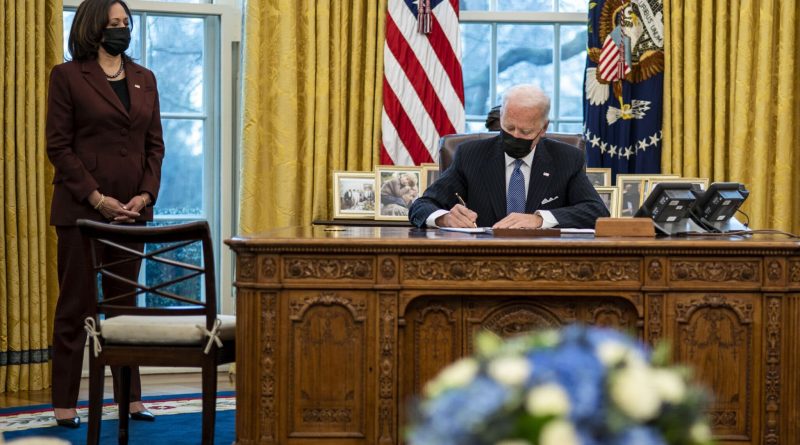 It’s not been a good week for vice president Kamala Harris.

Her communications director, Ashley Etienne, just quit. Plus, earlier in the week, a CNN article claimed that her aides think she is being “set up to fail” by the Biden administration.

The article, which reported significant tension between West Wing aides and the vice president’s office, also alleged that many of her aides think she is being sent out on “losing issues” and had started to reach out to contacts to say they’re looking to leave. Etienne’s subsequent exit added weight to these claims.

On top of that, the behind-the-scenes exclusive said that Kamala Harris didn’t feel that the White House has been defending her from attacks on the right – many of which are racist and sexist in nature.

All of this alleged tension and internal turmoil has been rebutted strongly by the West Wing, with press secretary Jen Psaki tweeting: “For anyone who needs to hear it @VP is not only a vital partner to @POTUS but a bold leader who has taken on key, important challenges facing the country — from voting rights to addressing root causes of migration to expanding broadband.”

Jen Psaki’s decision to stick her head over the parapet in this way is an unusual one, and highlights the seriousness of the situation, which has since been arguably made worse (or at least more significant) by the departure of Kamala Harris’ communications director.

However, there is a downside to speaking out publicly about attacks based on your identity; something that many marginalised people know all too well, especially LGBT+ people.

“Kamala Harris resigns” and “where is Kamala Harris” have all been trending on Google this week as rumours abound about the vice president stepping down, rumours that the Biden team will be all too anxious to quash, for partly selfish reasons: they could destabilise an already struggling administration. Biden’s approval ratings were recently described as “mostly underwater”.

As well as tweeting, Psaki also took the step of appearing on Politico’s inaugural Women Rule Exchange where Psaki made it clear that all of these claims in the media could be attributed to sexism and racism.

“What I would note though and one of the things I really admire about the vice president (is that) she is the first African-American woman, woman of colour, Indian-American woman to serve in this job. So many firsts. It’s a lot to have on your shoulders.

“She is somebody who at a much higher level than the rest of us … wants to be seen as the talented, experienced expert; substantive policy person; partner to the president that she is. I do think there has been some attacks that are beyond because of her identity.”

These are strong claims, and they work to push back against similarly strong allegations that Kamala Harris doesn’t feel that the White House is supporting her.

Unfortunately, the minute Jen Psaki tweeted and spoke out about the right-wing attacks on Kamala Harris, she then legitimised and fuelled the narrative, says Lauren Gambino, the political correspondent for Guardian US.

Speaking on the Guardian’s Politics Weekly Extra podcast – for an episode titled “Is Kamala Harris being shunned by Biden”, she explained: “(Psaki’s) tweet came just hours after this CNN story posted this really devastating account of what they called ‘dysfunction’ on Kamala Harris’ team… so I think the White House felt that this had reached the level of needing to really push back.

“It also included some strong claims that Kamala Harris didn’t feel the White House was defending her publicly as she faced this unprecedented onslaught of racist and sexist attacks particularly from the right. It rose to the level where the West Wing decided we need to show our support… it’s certainly not the first story to suggest there is dysfunction on her team or that she’s a vice president adrift without a clear role.”

These rumours of Harris being “adrift” and that she has been “set up to fail” can be linked back to the issues she has been assigned: “intractable” and difficult issues like migration and voting rights. Both are incredibly difficult to make progress on given the make-up of Congress.

Lauren Gambino explained: “There are two pieces of legislation pending before Congress and both require 60 votes in the Senate, and there are not 60 votes in the Senate because it is evenly divided at the moment between Republicans and Democrats with Kamala Harris being the tie-breaking vote in favour of Democrats.

“Her challenge now is to either try to find some kind of compromise on this legislation that could bring over 10 Republicans, or there is this other option, which is to eliminate the so-called filibuster which would allow a simple minority to pass legislation in the Senate.”

Unfortunately, Biden doesn’t support getting rid of the filibuster, so Harris can’t focus on it if he’s not willing to address it.

Migration is another thorny issue. Biden appointed Harris as the face of the White House’s efforts to address the root causes of migration: tracing back the huge caravans of migrants passing through Mexico from Honduras, Guatamala and El Salvador, trying to find out why they left and what can be done to fix the issues in the Northern Triangle countries (as they’re known). However, this in turn makes it look as if Harris is ignoring the more visible crisis as these groups reach the U.S., with the right wing media asking: “Why hasn’t she visited the border?”

In short, she’s struggling to make progress, and if she fails, she’s seen to fail as the first woman VP in history. It’s a great deal of pressure. She also faces pressure to be ‘presidential’ as there is an expectation that she is planning to run for the top job in the future, which in turn, as Lauren Gambino says, “makes her a target of right wing media who would love to undercut her before that potential run”.

The situation she faces is a difficult, and possibly even toxic one. Jen Psaki isn’t wrong when she traces it back to racism and sexism, however it’s likely that the public statements the press secretary has made in support of the vice president may add even more fuel to the fire.

Even though Kamala Harris holds one of the highest political offices in the world, the issues she’s dealing with are ones that are mirrored around the world by all marginalised groups, including LGBT+ people as well as BIPOC.

Do you ignore the inevitable attacks, or speak out against them and potentially make them worse by adding fuel to the fire?

In many ways, its a lose-lose situation, and only time will tell how the events of this week will affect Kamala Harris’ potential run for president.