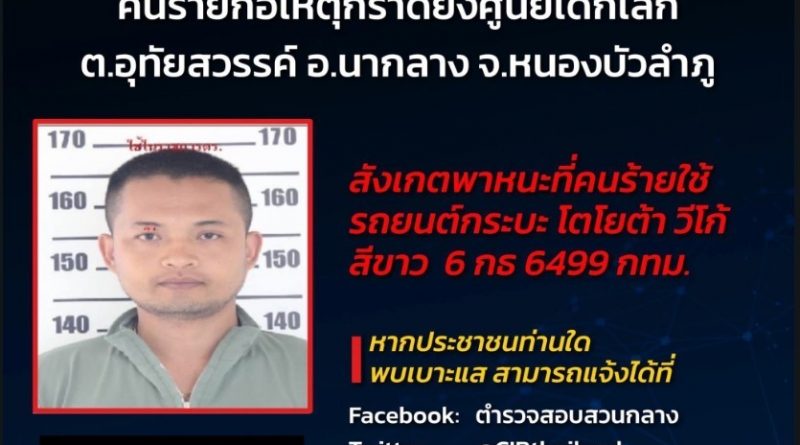 
A gunman killed at least 38 people, including himself, in a northeastern Thailand town on Thursday, in what is Thailand’s deadliest mass shooting to date.

Here’s what we know so far.

What are the details?

Police said the mass shooting and knifing began at a children’s daycare center, in Na Klang district of Nong Bua Lamphu, some 269 miles away from Bangkok, early in the afternoon.

According to the national police chief, Gen. Damrongsak Kittipraphat, 38 people including the gunman died as a result of the attack, the New York Times reported. The victims include 24 children, state broadcaster ThaiPBS reports, with some as young as 2 years old according to local media. At least 10 others were injured, including six critically, a police spokesman told the Associated Press.

The attacker, a former police officer, was armed with a shotgun, a pistol and a knife when he forced his way into the center around 12:30 p.m. local time and opened fire. The Associated Press reported earlier that 19 boys, three girls, and two adults were among those killed in the building, according to a police statement. The attacker also shot at least nine other people dead as he fled.

A district official told Reuters that one of the teachers shot was eight months pregnant.

In photos and videos of the scene that were posted online, one room in the daycare center was seen covered in blood and scattered with sleeping mats, the Associated Press reported. The publication added that in the background of videos, family members outside the center could be heard weeping as emergency services gathered on scene.

A witness reportedly told Thailand’s Kom Chad Luek television that the center’s door had been locked when the attacker was seen approaching with a handgun but that he used the weapon to shoot through it.

Thailand’s Central Investigation Bureau initiated a manhunt for the assailant but later said he was found at his home, where he had killed his wife and child and then himself.

In this mug shot released by the Thailand Criminal Investigations Bureau, a suspected assailant in the attack in the town of Nongbua Lamphu, northern Thailand, Oct. 6, 2022, is shown.

Police Maj. General Paisal Luesomboon told ThaiPBS that the attacker appeared under the influence of drugs and that he had been discharged last year for alleged drug abuse. Gen Damrongsak, the national police chief, said at a news conference that the assailant was had been at a hearing over the drug charges on Thursday morning and was due to be sentenced on Friday.

How common are mass shootings in Thailand?

Gun violence is a growing problem in Thailand. The country is second to the Philippines for the number of gun homicides in Southeast Asia.

But Thai gun experts say most illicit firearms are used for crimes other than homicide. Mass shootings in Thailand are rare. In February 2020, a 31-year-old soldier in the city of Nakhon Ratchasima killed 29 people and wounded 57 before being shot dead. Most of the victims were at a shopping center.

People write condolence messages in the Terminal 21 shopping mall one week after a lone soldier shot and killed 29 people during a 17-hour-long shooting spree in several locations across the city, in the northeastern Thai province of Nakhon Ratchasima on February 15, 2020.

Among the slain were the shooter’s superior officer, as well as the officer’s mother-in-law, who was accused of cheating the soldier in a lucrative land deal.

Read More: Why the Philippines Has Lots of Guns But Few Mass Shootings

On Sept. 14, 2022, a soldier at a base in the Thai capital Bangkok killed two people and wounded one.

Are guns easy to get in Thailand?

An article published just a month ago on the English-language website of Thailand’s public broadcaster warned of the ready availability of firearms.

Entitled “4 million reasons to believe Thailand has a problem with illegal guns,” the article said there were 4 million unregistered weapons in the country and 6 million registered ones.

Read More: Guns Are Everywhere in Thailand. Could the Country’s Deadliest Mass Shooting Change That?

“Online marketplaces make it cheap and easy for civilians to obtain guns without having to go through complicated background checks,” the article said. “Several Thai social media accounts offer guns for sale with a home delivery service.”

It added that “tough rules can be bypassed with bribes or connections in the bureaucracy.”

How are Thailand and the world reacting?

Read More: An Ex-Cop Is Behind Thailand’s Deadliest Mass Shooting. Now, the Country Is Asking Questions

Meanwhile, world leaders expressed shock and sent their condolences to the people of Thailand following the shooting.

Australia’s Prime Minister Anthony Albanese posted on Twitter that it is “impossible to comprehend the heartbreak” of the horrific news. “All Australians send their love and condolences,” he said.

Liz Truss, the British Prime Minister, said that she was “shocked” by the shooting. “My thoughts are with all those affected and the first responders,” she said. “The U.K. stands with the Thai people at this terrible time.”

With additional reporting by Armani Syed/London.

This is a developing story.