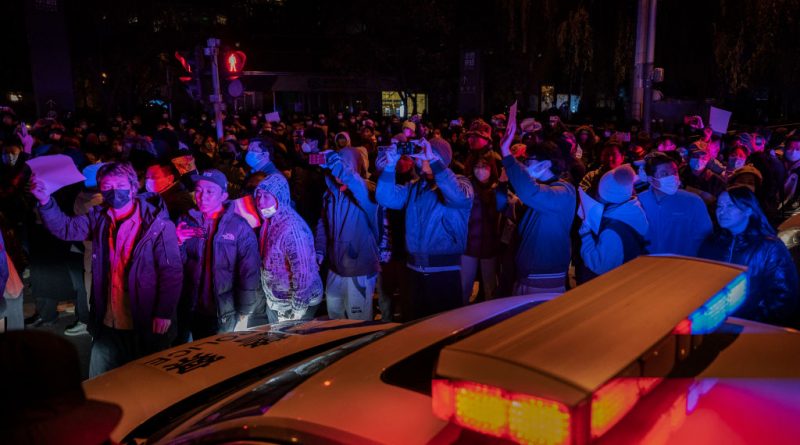 
Across China, rare mass protests have grown against the country’s stringent zero-COVID pandemic protocols, with demonstrators in numerous cities taking to the streets to express their frustrations.

While protests are not completely unheard of in China, the ones that do occur tend to be location- or issue-specific—from workers demanding wage hikes to homebuyers decrying delayed housing projects. And a robust surveillance infrastructure and swift responses from state forces typically nip these in the bud before they can spread. This time is already different, though it’s impossible to verify exactly how many of China’s 1.4 billion people have participated.

The apparent catalyst was an apartment fire that took at least 10 lives in Urumqi, the capital of the northwestern Xinjiang region, last Thursday. Suggestions that COVID measures delayed emergency responders set off a wave of public unrest unlike any other.

The zero-COVID approach pursued by President Xi Jinping has kept infections at bay in China, but the prolonged isolation and regulated mobility it’s entailed has been increasingly met with public pushback and even been blamed for several recent high-profile tragedies. Officials deny that COVID policies were responsible for the casualties in the Urumqi blaze.

As China watches the rest of the world open up, frustration over its own harsh and disruptive pandemic measures grows. Those who flout the measures or criticize them have been beaten or arrested. Despite this, demonstrations against zero-COVID continue to sprout in major cities, including the capital Beijing and the financial hub of Shanghai.

The grievances against testing and quarantine requirements that reached a fever pitch over the weekend have also morphed into brazen opposition against Xi and the ruling Chinese Communist Party. “We don’t want a leader, we want votes,” chanted protesters in Beijing Sunday carrying blank white sheets of paper, a new symbol of resistance. In Shanghai, protesters have called for Xi and the CCP to step down and apologize.

Whether or not this discontent will challenge the ruling party’s power remains to be seen, but “the fact [the current mass protests] were even lodged in the repressive political atmosphere itself suggests that public dissatisfaction has reached the tipping level,” Yanzhong Huang, senior fellow for global health at the Council on Foreign Relations, tells TIME.

Here’s what you need to know about the protests rocking China.

How big are the protests?

Protests against zero-COVID have been reported in at least eight major cities across the country, according to the Associated Press.

In Shanghai, hundreds of residents gathered for a candlelight vigil on Urumqi Road on Saturday evening to mourn the victims of the fire in Xinjiang. The vigil turned into a protest when, according to CNN, the crowd yelled “Don’t want COVID test, want freedom!” as others held up banners decrying the strict pandemic protocols. The demonstration carried on until the next day, and several people reportedly continued to show up at the protest site on Monday.

In Beijing, the Guardian reports that some 1,000 people gathered on a road near the Liangma River, holding up blank sheets of paper and singing, refusing to disperse until the wee hours of Monday morning.

People also reportedly gathered at universities to show their disapproval of the zero-COVID measures. Videos on social media, which TIME could not immediately verify, purportedly show students of the Communication University of China in Nanjing gathering for a vigil similar to that in Shanghai. Some protesters also gathered in Peking University and Tsinghua University in Beijing, based on social media posts. The Communist Party has a sore spot for universities, as the 1989 Tiananmen Square protests were student-led.

Huang, the CFR senior fellow, says these protests haven’t “reached a national level” yet. As to how big they may get, observers agree that it’s hard to forecast, but it appears the protests are becoming more organized. Jean Pierre Cabestan, emeritus professor of political science at Hong Kong Baptist University, tells TIME the protesters are beginning to use the same messages across demonstrations, many of them echoing language from a viral banner protest last month. “The anti-COVID protest has become much more political,” he tells TIME.

How did the protests begin?

Protests against zero-COVID have been happening for months, but researchers from rights group Freedom House note an uptick since September. Kevin Slaten, the research lead of the group’s China Dissent Monitor project says one unique thing about the latest protests is how the fire in Urumqi became a “galvanizing” force for people in other cities, too. He says critics piggybacked on hashtags, meant for disseminating news on the fire on Chinese social media sites, to express anger and rage against how authorities handled the apartment tragedy.

“That wasn’t happening with the [past] COVID-19 protests so much,” Slaten tells TIME.

Urumqi had been in lockdown since August, and thus, transportation services were halted. With the lockdown, Xinjiang managed to keep COVID-19 cases down, at one point even back to single digits. By October, however, daily infections in the region had risen again, ending hopes of a reopening.

But the deadly high-rise building fire, which also injured nine, took nearly three hours to take out, Bloomberg reports. Residents and users took to social media to denounce authorities’ delayed emergency response, blaming the various zero-COVID restrictions in place. Officials eventually apologized and, on Saturday, promised to lift the restrictions “in an orderly manner,” but by then protests had already broken out in other cities.

As an authoritarian state, China doubles down on acts of dissent. Chinese censors are also quick to suppress any mention of protest online—a common response to threats against the one-party rule. Videos and photos of the current wave of demonstrations have already been scrubbed from Chinese social media.

In Shanghai, Chinese police clashed with protesters, pepper-spraying and hitting several of them. Videos from AFP showed police detaining people on Monday where the Shanghai protests happened, after the crowds fizzled out. Police cars also patrolled the streets more frequently, and new barriers were installed where protests had broken out.

A statement from the BBC said Ed Lawrence, one of their journalists covering the Shanghai protests, was arrested and later released. The media organization’s spokesperson expressed concern over Lawrence’s treatment, claiming he was “beaten and kicked” by the police.

Protesters march by a police cruiser during a protest against China’s strict zero-COVID measures in Beijing on Nov. 27, 2022.

“Until recently, most Chinese people were very scared about the efficiency and the magnitude of the repressive organs of China and they wouldn’t move a finger,” Cabestan says. But the recent protests show just how much people are “fed up with the current situation and think things have to change.”

So far, however, the AP reports that the government’s response to the protests has been mostly muted. But dragging Xi’s name into the demonstrations has security implications. “People know that’s a red line,” Slaten tells TIME. “Repression will get ramped up if you touch things like that.”

How long can zero-COVID last?

To an extent, the protests have yielded some results already: authorities eased some of the COVID restrictions in Urumqi as well as in Beijing and Guangzhou.

But the Chinese government has thus far kept quiet on the mass protests, only reinforcing through state media the importance of keeping zero-COVID measures in place.

As to whether the protests can force the Chinese government to end its zero-COVID strategy any time soon, experts say it’s not likely.

Some concessions may be made, depending on how confident China is in its ability to “squash all discontent on the streets,” says Slaten from Freedom House.

For Huang, although much of the anger being expressed is directed at Xi, the central government may try to appease social unrest by punishing some local officials “just like they did before,” he says, referring to how local officials were forced to resign earlier this year for failing to handle outbreaks in their jurisdictions.

Still, the lack of natural immunity of China’s citizens and questions over the efficacy of its domestically produced vaccines raise concerns that any move towards opening up will deal a huge blow to China.

On Monday, China registered a new daily record in COVID-19 infections, with more than 40,000 fresh cases.

“The government can still relax the policies to quell the protests, but the policy relaxation will be followed by [a] rapid surge of cases, an outcome the top decision maker may not want to see,” says Huang.