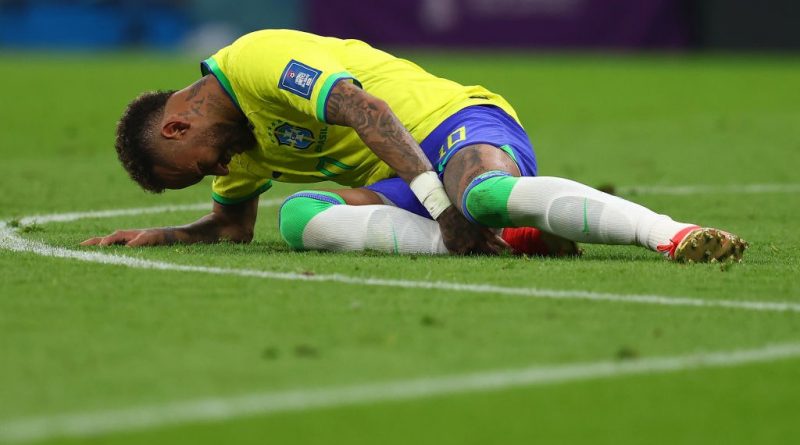 
On Thursday, Neymar sustained a lateral ligament injury on his right ankle during Brazil’s opening win against Serbia following a tackle from Nikola Milenkovic, leaving fans wondering when he will return.

The Paris-Saint Germain forward is working “24 hours a day” to recover from his ankle injury and continue to represent his team, Brazilian player Marquinhos told the Associated Press Sunday. “We don’t know when it’s going to happen, but we hope we will have him with us again as soon as possible and in good health mentally and physically.”

Brazil is set to play Switzerland on Monday at 11 a.m. ET.

Neymar, 30, won’t be playing on Monday, but Brazilian soccer manager Tite seems confident that he will return. “I believe that Neymar and Danilo will play [in] the World Cup,” Tite said during a press conference. “I believe in that. Medically, clinically, they can talk more about the stages of the treatment. I have no place to talk. I trust that we will be able to use both of them.”

Following the match against Serbia, Tite says that Neymar was in physiotherapy until five or six in the morning.

Tite added that he had to force Neymar and Danilo, another injured Brazilian player, to stop their physiotherapy and attend the latest training with the team.

The soccer star is working hard to ensure he can continue playing, posting updated pictures of his swollen ankle on his Instagram story and dedicating an Instagram post to the match, calling it one of the most difficult moments of his career. “I have an injury, yes, it’s going to hurt but I’m sure I’ll have the chance to come back because I will do my best to help my country, my teammates and myself,” Neymar said in his post.

Sources told ESPN that Neymar will likely also miss the third match of the group stage against Cameroon, though there has been no official announcement by any team spokesperson.

Brazil’s manager admits it will be hard to find someone who can play at Neymar’s level, but the team has a strong roster to choose from. Neymar’s teammates are more optimistic about the potential of the team.

“We are talking about one of the best players in the world. It’s hard to find someone else on his level,” Brazil midfielder Casemiro said Saturday. “But we have many quality players in the squad who can do a good job replacing him.”

Neymar has a history of getting injured

Neymar has a bad streak of luck at tournaments, suffering a separate ligament injury in a friendly match against Qatar just before the start of the 2019 Copa America. Brazil went on to win the championship without their star player, but Neymar was also left off the roster for the entire tournament.

During the 2014 World Cup, Neymar’s time on the field was also cut short when Juan Camilo Zuniga kneed the soccer star, breaking a vertebra during a quarterfinal match against Colombia.

That injury could have ended his soccer career, Neymar later revealed in an interview with The Player’s Tribune. “I couldn’t move my legs. And the doctor took me out and I started to … to cry. Because it was very painful and I didn’t feel anything. I didn’t feel my legs, so I went to the hospital that’s in the stadium,” he said.

His team then lost against Germany 7-1 in the following semifinal match.