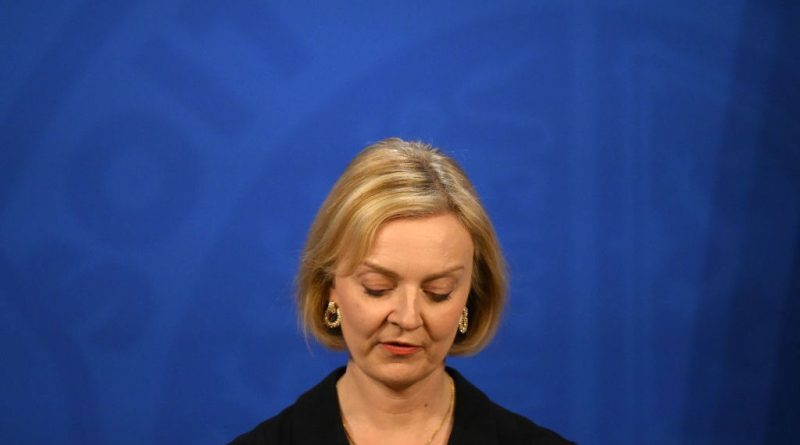 
When Liz Truss entered 10 Downing Street in early September, she became Britain’s fourth Conservative Prime Minister in six years. Now, just six weeks into her tenure, it is looking increasingly likely that she could be forced out to make way for a fifth. So dire is the state of the things that a popular live video-stream is measuring whether Truss can outlast the shelf-life of an iceberg lettuce.

For Britain to lose yet another leader less than two months into the current one’s tenure would be nothing short of historic. The country’s shortest-serving Prime Minister, George Canning, survived more than twice as long when he held the role almost two centuries ago (and his time in office was cut short by tuberculosis). But it would also be indicative of what increasingly appears to be a very British problem. The country has spent much of the past six years reeling from one crisis to another, from the fallout of the vote to leave the E.U. to the COVID-19 pandemic to the economic turmoil spurred on by Russia’s invasion of Ukraine. While both David Cameron and Theresa May resigned over Brexit (the former for failing to persuade Britons to remain in the E.U. and the latter over her inability to get her Brexit deal through the House of Commons), Boris Johnson was pressured to step down following a series of ethics scandals, most notably his failure to adhere to his own government’s pandemic restrictions.

When Truss succeeded Johnson, she did so facing a litany of challenges, not least a looming energy crisis and inflation rates not seen since the 1980s. But it was her government’s response to them—in the form of billions of pounds in unfunded tax cuts for the wealthiest Britons—that ultimately put her position in peril. Truss has since reversed those policies and fired her finance minister and close friend, the now-former Chancellor Kwasi Kwarteng, for making them at her behest. While this week’s economic U-turns may be enough to reassure the financial markets for now, they are proving less capable of assuaging her own colleagues or British voters, many of whom now see Truss as a leader without a plan or a purpose.

What were Truss’s economic policies?

Over the summer’s Conservative Party leadership contest, Truss presented herself as an arch-Brexiteer and the Johnson continuity candidate, albeit with one major distinction. Whereas Johnson’s government raised taxes to finance increased public spending, Truss pledged to slash them, most notably for corporations and the country’s highest earners, in what she said would help turn the U.K. into a high growth economy. But the evidence for these growth claims are thin and the proposed tax cuts sent markets into a frenzy, crashed the pound, and invited a rare rebuke from the International Monetary Fund, which warned that the measures “will likely increase inequality.” Even U.S. President Joe Biden, who made no secret of his opposition to Truss’s trickle-down agenda, admitted that he thought the policies were “a mistake.”

Truss later said these policies went “too far and too fast” and announced last week her decision to reverse many of them—a task that has since fallen to her new Chancellor, Jeremy Hunt. “No government can control markets,” Hunt said in a statement on Monday announcing the U-turns. “But every government can give certainty about the sustainability of public finances.”

Read more: What to Know About Jeremy Hunt—Now Britain’s Most Powerful Politician

Will Truss’s about-face keep her in power?

Probably not. Truss’s economic reversals haven’t placated her political opponents nor are they likely to endear her to her former allies, including Kwarteng. Dozens of her Conservative colleagues are believed to have submitted letters of no confidence in the Prime Minister to the influential 1922 Committee, which oversees the election of party leaders. Those who have chosen to voice their concerns publicly have dubbed Truss’s time in office as “potentially irreparable” to party unity and “a monumental foul up.” Even the country’s tabloids and right-wing broadsheets, which the Conservatives can typically rely on for friendly coverage, have been scathing.

Britons have seen this particular movie before. Once a Prime Minister loses the confidence of their own party, it becomes virtually impossible for them to maintain their legitimacy, especially if they come to be regarded as an electoral liability. And recent polls have shown Truss’s favorability falling to just 10% (and a mere 12% among Conservative voters). Even Johnson—who won the Conservatives their largest majority in decades—was not able to shield himself from the fallout of numerous scandals, a confidence vote, and dozens of ministerial resignations. Once he was seen as a potential election loser, his political fate was sealed. Truss, who is presiding over a party polling at just 20% and whose mandate is derived from the expressed support of less than 1% of the British electorate, is even more vulnerable.

Truss has so far resisted calls to resign and has even vowed to lead her party into the next general election, which is slated for January 2025 at the latest. As far as many British politics observers see it, though, it is now a matter of when she goes, not if. “This is the end of days,” says Anand Menon, director of the London-based think tank U.K. in a Changing Europe. “Once people have started wondering how long you’ve got, you’re gone.”

Can Truss be forced from power?

Under the current Conservative Party rules, Truss is immune from a confidence vote during her first year as leader—meaning one cannot be called until September 2023. If the Conservatives want to oust her as their leader, they must either wait until next year or change the rules. The latter is not impossible, though it would require the support of a “large majority” of Conservative lawmakers, a 1922 Committee executive member told the BBC.

If the rules are successfully changed and at least 15% of Conservative MPs (54, as of this writing) submit letters of no confidence in Truss, then a confidence vote is triggered and a secret ballot is held. If Truss wins the support of more than 50% of her colleagues, she remains in office and is immune from further such votes for a year, barring any further rule changes. If she loses, she must resign as party leader and, therefore, Prime Minister.

The only other scenario under which Truss could be forced from power is through a general election. The only way this could happen is if the government calls for one (and gets two-thirds of MPs to support it) or if the government loses a confidence motion (which can be tabled by the government or opposition parties).

But the likelihood of the Prime Minister calling for one, or of her Conservative colleagues supporting it, is slim. Polls suggest that the Conservatives would not only lose their 71-seat majority, but that they would also fail to win enough support to even be the largest opposition party. That isn’t a gamble that even the most rebellious Conservative appears willing to take.

If Truss does go, what happens next?

A Conservative leadership contest would automatically be triggered to determine Truss’s replacement as the head of the party—a decision that ultimately falls to the Conservative Party’s roughly 200,000 grassroots members who tend to be older, wealthier, and whiter than the rest of the country. The last leadership contest spanned eight weeks. This time, some Conservative lawmakers have suggested forgoing a members vote and leaving the final decision to MPs amid fears that the member base could choose another leader who is unpalatable to the wider public.

Among the runners and riders to replace Truss is her former leadership rival Rishi Sunak, the former Chancellor under Johnson’s government whose early warnings about Truss’s fiscal policies have cast him as a safe pair of hands for the British economy, as well as Hunt, who has twice run for the top job. Even Johnson has been tipped as a viable option.