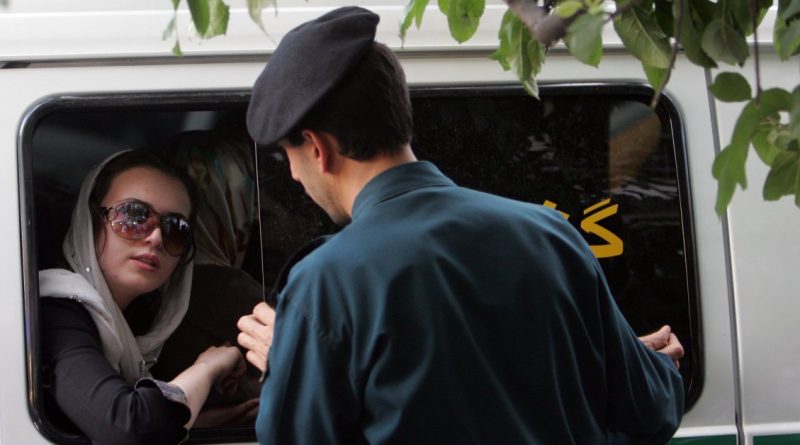 
In 2007, Pardis Mahdavi was 13 minutes into her lecture at a university in Tehran about gender and sexuality in post-revolutionary Iran when the morality police stormed through the auditorium doors.

“Pandemonium erupted. I was…pulled off stage. I was frozen in a state of suspended animation and…turned to look at one of them who had raised a hand and then I blacked out,” Mahdavi says. Iranian authorities charged Mahdavi, who is provost of the University of Montana, with trying to foment a revolution. She was under house arrest for 33 days.

Much of Mahdavi’s research has focused on sexual politics in Iran, a large part of which entails the morality police, an entity that has faced increasing international scrutiny over their role in the death of 22-year-old Mahsa Amini. (The E.U. and U.S. imposed sanctions on the morality police following Amini’s death and subsequent crackdowns on anti-government protests.) Amini died in state custody after being arrested for “improper hijab.” Her death sparked a sweeping movement in which many women and girls took their hijabs off and cut their hair.

Many Iranians believe that the morality police is a part of the state’s way of ensuring control.

“This has nothing to do with morality or with policing,” says Hadi Ghaemi, executive director of New-York based Center for Human Rights in Iran. “These are state security forces who are assigned… to harass and subjugate women and thereby show a constant demonstration of force.”

What does the morality police focus on?

Iran’s morality police, also known as Gasht-e-Ershad (guidance patrol), primarily enforces laws tied to regulating Islamic dress. While that entails ensuring women are wearing the hijab, it’s not the only aspect of appearance they’re observing. “If [clothing] is too tight, if the body shows too much, if your sleeves are up, if your jeans are torn,” says Assal Rad, research director at the National Iranian American Council. “They will take you to a detention center…until someone comes and brings you the [appropriate clothes].”

Dress often remains the focus as it can be the most obvious issue to police, experts note. But they can also arrest and detain individuals for alcohol consumption, or for attending mixed gatherings of males and females not related to each other. “It’s about interfering in people’s personal life,” Ghaemi says.

Part of why Amini’s death triggered such an emotive response was that she was punished for having some of her hair showing. “It’s the fact that it could have been anybody; millions of Iranian women wear this hijab loosely. This has almost become standard practice,” Rad says.

The morality police sees itself as responsible for “upholding right and forbidding wrong,” Mahdavi says. “That leaves a lot of room for interpretation.” They are often more strict around religious holidays, summer and election time, she adds.

When was Iran’s morality police created?

The morality police did not officially become a separate force until after the Iran-Iraq war in the 90s, says Roxane Farmanfarmaian, who teaches international politics of the Middle East and North Africa at the University of Cambridge.

However, harassment of women in public spaces for their dress choices has taken place since the beginning of the revolution. Iran has mandated head coverings for women since 1979.

Iran’s efforts to enforce these rules became even more organized in the mid-2000s after Mahmoud Ahmadinejad became president, experts say. “Raisi did exactly the same thing as soon as he got into power this spring; he decided to beef up the presence of the morality police,” Ghaemi says.

What other countries have a morality police?

Iran is not the only country to have employed morality police. In Saudi Arabia, the Mutawa used to be particularly harsh in punishing men and women for mingling with the opposite sex or consuming alcohol. But since 2016, the institution has largely been sidelined as some restrictions on women have been eased.

In Sudan, a new police squad has raised fears that the country will return to its strict morality policing. The notorious Public Order Police that functioned under Omar Al Bashir’s dictatorship scrutinized women for dress and socialization with the opposite gender.

In Malaysia, religious officers can arrest those engaging in eating during fasting hours in Ramadan along with those in mixed gatherings. Crimes are tried in sharia courts.

How have Iranian women protested the morality police?

While not always overtly breaking the law, many Iranian women have consistently pushed the boundaries in their everyday lives, participating in acts of subtle resistance. They may wear their hijab loosely, veil their body but wear a form-fitting outfit, or don bright red lipsticks.

Some acts of protest have been more obvious and risky. In 2017, Iranian activist Masih Alinejad began the “white Wednesdays” movement in which women discarded their headscarves and wore white to protest the hijab mandate. Alinejad has since been exiled from Iran. In July, women protested by taking off their hijabs as part of a female-led campaign called “hijab-bi-hijab.” And in 2016, a group of Iranians came up with a mobile app called Gershad to help avoid checkpoints manned by the morality police by using crowd-sourced data.

While protesters have criticized the morality police, Ghaemi says it’s important to recognize that protesters’ demands go far beyond the particular institution. “[The movement] is about young people refusing to live under the Islamic Republic and all of its institutions because they don’t see a future anymore. The morality police is just one symbol of it,” he explains-simply reforming or disbanding the morality police would not be enough.