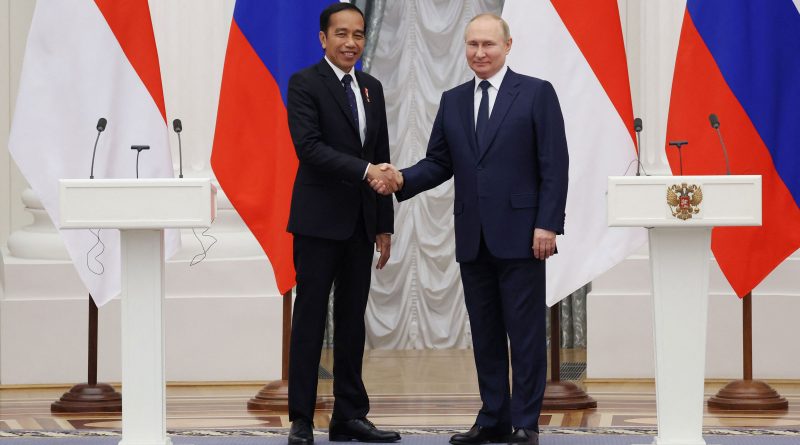 
Indonesia gathers the leaders of the world’s 20 largest economies in its island paradise of Bali for a two-day summit from Nov. 15-16 to discuss how they can cooperate on building a more stable future. But while this year’s summit has a post-pandemic theme of “Recover Together, Recover Stronger,” geopolitical divisions are taking center stage.

The summit’s chair, Indonesian President Joko Widodo, had hoped the gathering would provide an opportunity for some of the world’s biggest powers to set aside their differences in order to focus on addressing the pressing global challenges of COVID-19’s ongoing health risks, looming economic recession, and sustainable development. But Russia’s invasion of Ukraine, along with the energy and food supply crises it exacerbated, has cast a shadow over the G20. As have rising tensions between China and the United States.

“The G20 is not meant to be a political forum,” said Jokowi, as the Indonesian leader is known. “It’s meant to be about economics and development.”

Read More: The Quagmire in Ukraine Is Making Russia a Less Valuable Ally to Others

As part of a tour to drive the importance of attending the summit, Jokowi visited Moscow and Kyiv earlier this year. In the hope of fostering inclusive dialogue, he rejected pressure to exclude Russia from this year’s summit and extended an invitation to Volodomyr Zelensky, the President of non-member state Ukraine. But Zelensky announced that he would not attend the summit if Russia’s Vladimir Putin would be there, and other Western leaders balked at the idea of sharing a table with Putin. Last week, officials confirmed that Russia would send a foreign minister to Bali in Putin’s place; a Zelensky spokesperson said the Ukraine leader would likely attend virtually.

While much attention in the run-up was paid to whether Putin and Zelensky would show up, the in-person presence of U.S. President Joe Biden and China’s Xi Jinping also looks to eclipse the main event. The dueling superpower leaders will meet face-to-face for the first time in Biden’s presidency ahead of the summit on Monday. The meeting comes amid an increasingly strained relationship between the two governments over disagreements on trade policy, human rights, Ukraine, and Taiwan.

Observers believed Jokowi intended chairing the G20 to be his capstone project to burnish the international profile of Indonesia, the world’s fourth most-populous country and the first Southeast Asian nation to host the summit. But with this year’s meeting overshadowed by so many other factors, analysts believe Indonesia now just wants to get it over with and pass the torch to India, who will host the summit next year.

Indonesia’s foreign minister, Retno Marsudi, told Reuters earlier this month how hard it has been to stage the summit amid such a fraught geopolitical situation. “It may be the most difficult of all G20s,” she said.

“This was not what they signed up for,” Gregory Poling, senior fellow and director of the Southeast Asia Program at the Center for Strategic and International Studies, said at a press conference last week. “It’s been a rough year.”

The Group of 20, or G20, is a council of 19 countries and the European Union, which gathers to discuss major issues facing the global economy. Together, the G20 represents more than 80% of the world’s total economic output, 60% of the Earth’s population, and 75% of global trade.

Formed in 1999 as an outgrowth of the G7 in response to the international debt crises of the time, the G20 aims to ensure global economic and political security through discussions between its members as well as an annual summit of finance ministers and, since 2008, heads of state.

The presidency, and hosting duties, of the G20 rotates among member states each year.

What are the top issues for this year?

The 2022 G20 summit comes as the world edges toward a global recession. Countries’ central banks have been hiking interest rates to curb inflation, but prices struggle to return to pre-pandemic levels. The World Bank reports that these hikes, coupled with financial market stress, could lead to global GDP growth slowing down to 0.5% next year, which would destabilize major economies and significantly slow poverty alleviation in developing countries.

Disruptions related to COVID-19, especially in China, have also snarled international supply chains—causing bottlenecks in trade and hampering global economic activity. And the world is headed for twin food and energy security crises stemming from regional conflicts, including the war in Ukraine, and natural disasters intensified by climate change.

Read More: The World’s Future Is in the Hands of Chinese President Xi Jinping

What effect has the Ukraine-Russia conflict had on the G20?

Russian President Vladimir Putin shakes hands with Indonesia’s President Joko Widodo after a press conference at the Kremlin in Moscow, on June 30, 2022.

Besides upending the liberal international order, the Russian invasion of Ukraine sparked a global energy supply crisis and worsened the global food crisis.

The G20 summit and its related meetings earlier this year have become a forum for other member states to air their grievances against Russia. In an April G20 meeting, finance ministers from the U.S., the U.K., and Canada staged a walkout as Russian envoys spoke. In another G20 meeting in July to lay the groundwork for this week’s summit, the diplomats in attendance failed to produce a customary group communiqué over bitterness about Russia’s responsibility for the war’s impact on the world. And in September, efforts to reach multilateral resolutions on education and climate also broke down over denouncements of Moscow’s invasion of Ukraine.

Russian foreign minister Sergey Lavrov, who walked out of the July meetings, will attend the leadership summit this week on Putin’s behalf and will likely remain a divisive figure and focus of scorn.

How will U.S.-China relations play a role at the summit?

The G20 Summit offers a rare opportunity for Biden and Xi to meet in-person. Biden arrives in Bali on the heels of a midterm election that went surprisingly well for the Democratic Party, while Xi just secured a norm-breaking third term at the helm of the ruling Communist Party weeks earlier. But tensions are running high between the two governments, which are expected to represent opposing ideals and visions for the global economy at the first multilateral assembly where both presidents will be present.

China has urged Indonesia to keep politics out of the G20, but divisions over Russia are likely to be an unavoidable flashpoint. The country has taken a strategically less aggressive stance toward Moscow than its Western counterparts would like, and it pushed back against calls in March to boot Russia from the G20. “The U.N. Security Council is the right platform to discuss political and security issues,” China’s foreign minister said in a statement in May. “The G20 should remain in its role, focusing on macroeconomic policy coordination and fulfilling its proper mission.”

Biden, according to officials who spoke to Reuters, plans to be “unapologetic” at the G20 in defense of Ukraine and criticism of Russia for its responsibility for the war’s impacts on food and energy security.

Biden and Xi are also using the G20 summit in Bali to hold a bilateral meeting on Monday at which Taiwan is expected to top the agenda. Other issues including climate change, trade policy, and the treatment of Muslim Uyghurs in China’s Xinjiang province are also points of contention. Biden has said that he hopes the meeting will offer each side clarity on where the other’s “red lines” are.