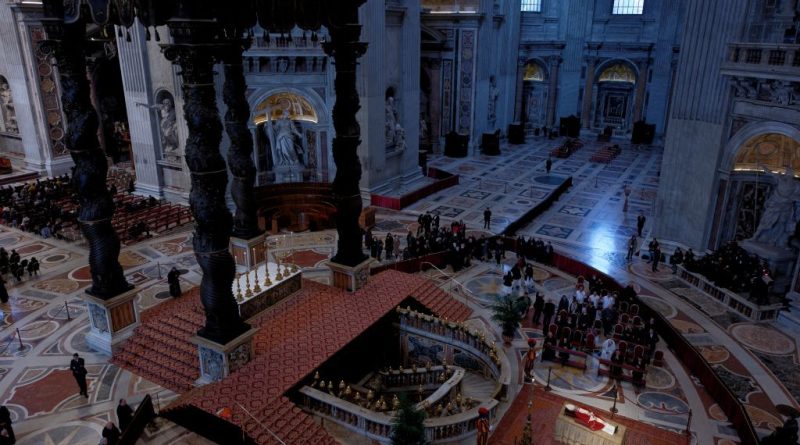 Benedict XVI’s body was transferred to St. Peter’s Basilica on Monday, where it will remain for the lying in state through Jan. 4. Hundreds of thousands have already visited and viewing is open until 7 p.m. Wednesday.

Pope Benedict XVI’s passing comes after 10 years in papal retirement, during which he lived at the Mater Ecclesiae Monastery in the Vatican Gardens. The pope emeritus was the first pope in 600 years to resign from office in February 2013, saying that he had to acknowledge his “incapacity to adequately fulfill the ministry entrusted” to him.

Here’s what to know about his funeral.

Where and when is his funeral?

Pope Benedict will be interred in a traditional cypress casket, and then carried into St. Peter’s Square on Thursday at 8:45 a.m., for the recital of the rosary about 45 minutes before the mass.

Pope Francis will preside over the funeral mass, though Cardinal Giovanni Battista Re will be the main celebrant at the altar.

Live streams of the funeral will be available on the Vatican’s Youtube Channel.

Who is expected to attend?

More than 60,000 people are expected to attend the funeral.

Delegations representing Germany (Benedict’s home country) and Italy were invited to attend the funeral, per a statement from the Holy See Press Office.

King Philippe and Queen Mathilde of Belgium confirmed they will attend the ceremony. As did Queen Sofia of Spain, who is going in representation of her son, King Felipe. Other heads of state, including the presidents of Poland, Germany and Hungary are also expected to attend, according to the Catholic News Agency.

Joe Donnelly, U.S. ambassador to the Holy See, will also be present, in a decision that White House Press Secretary Karine Jean-Pierre said was in line with the wishes of the late Pope and the Vatican.

Cardinals and archbishops from several countries will also be expected to attend.

What to expect from the service

Vatican spokesperson Matteo Bruni told the press that the funeral service will be simple to honor the wishes of Pope Benedict.

And since Benedict XVI was not the reigning pope at the time of his death, there will be some changes to his memorial service. Most significantly, the United States Conference of Catholic Bishops (USCCB) reports, two final prayers from the diocese of Rome and the Eastern rite churches will not be recited because these are specifically meant to honor a presiding pope.

“The liturgical celebration follows the model of a funeral service for a supreme pontiff,” Bruni told the press on Tuesday. New elements to the funeral will instead be added to give the ceremony ‘its originality.’”

The first reading, for instance, will be from the Book of Isaiah, instead of a passage from the Acts of Apostles, as it was at St. John Paul II’s funeral. The second reading will also be distinct, with a passage from the first letter of St. Peter that discusses the eternal life promised to God’s children.

Following the mass, Benedict’s casket will be sealed and wrapped with ribbons before it is placed into two more caskets of zinc and wood, per the USCCB.

Where is he being buried?

Pope Benedict XVI will be buried in Pope John Paul’s II first tomb, which is less than 100 feet from the Tomb of St. Peter. (John Paul II was moved to a chapel in the basilica in 2011 after he was beatified).

A “rogito,” or one-page scroll accounting the highlights of Benedict’s papacy will be placed into a metal cylinder and into his coffin for burial, along with medals, palliums and Vatican coins minted during his reign, according to the USCCB..

The final moments of Benedict XVI’s burial will be done in private.