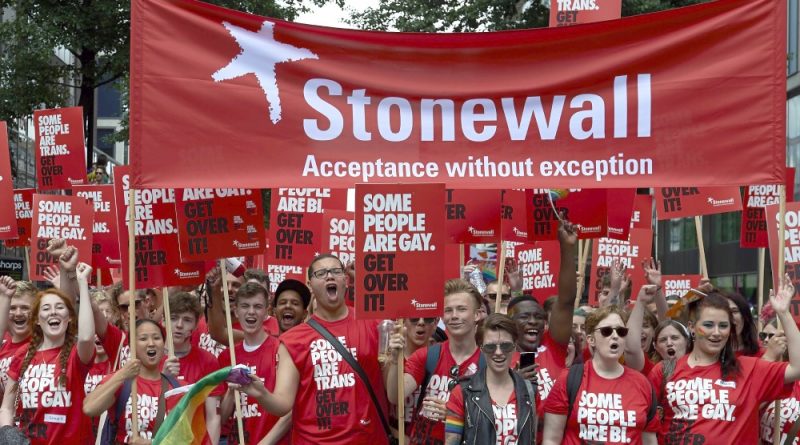 Stonewall is the UK – and Europe’s – largest LGBT+ charity. (Getty)

Those who do not know their history are condemned to repeat it, so the saying goes.

Stonewall, Europe’s oldest and biggest LGBT+ charity, has a rich history – one that seems to have been forgotten by certain LGB activists set on targeting the charity because it dares to support trans rights.

As Scottish minister Patrick Harvie recently explained, Stonewall has been subjected to an “opportunistic hate campaign” in recent years. Politicians and media have attacked its Diversity Champions programme, a relatively tame scheme that aims to make workplaces more LGBT+ friendly by advising employers on issues like parental leave for lesbian couples.

Despite the pushback from certain quarters, “Stonewall is still there and still fighting and still sane,” says Lisa Power, one of the original founders. “I think it’s absolutely brilliant. When we started Stonewall, we didn’t envisage a chunk of this. We talked about equality. But we never talked about things like equal marriage, because we just couldn’t get that through our heads.”

For Lisa, who is a lifelong LGBT+ rights campaigner, the laws and legislative changes Stonewall brought about are its shining legacy, the lasting protection of LGBT+ people and rights in the UK.

Its lobbying helped equalise the age of consent for gay and bi men, lift the ban on LGB people serving in the military, secure adoption rights for queer couples, repeal Section 28 and bring in civil partnerships for same-sex couples.

“Those things were not going to happen from the movement that lesbians and gay men had before Stonewall,” Lisa says firmly. “We would never have got all that stuff into parliament and through parliament.”

Founded in 1989 by a small group of gay and lesbian activists who were fighting against Margaret Thatcher’s homophobic Section 28 legislation, Stonewall started life at Sir Ian McKellen’s home and was subsequently named around Lisa’s kitchen table. She describes it as a scruffy outfit; the first time that gays and lesbians had properly campaigned together in the UK; and a bringing-together of people with sometimes very different views on other things.

“I had never sat down with a gay Tory or an openly gay police officer before,” Lisa recounts. But they all agreed to leave aside their differences and focus on their overarching goal: repealing Section 28 and equality for gays and lesbians.

From the beginning, some in the wider LGBT+ community disliked the organisation. It wasn’t radical enough for many, and others were suspicious of its quiet lobbying efforts. “We were hated because we were reformists. We were hated because we were a wide coalition,” Lisa says. Nancy Kelley, Stonewall’s CEO, adds that today: “All young LGBTQ people have to go through a phase of having very fixed views about Stonewall. This is a healthy part of our development.”

Now Europe’s largest LGBT+ charity, the organisation has London headquarters resplendent in glass, steel and high ceilings. And it’s “a shining example to queer organisations across the rest of the globe in countries that haven’t managed to get that much together” Lisa adds.

Lisa, along with fellow founders Sir Ian McKellen and Lord Michael Cashman, is an outspoken ally to trans people. She’s also, in Nancy’s words, “queen of the lesbians” – a statement somewhat at odds with the popular refrain of trans-hostile media, which is that lesbians are becoming “extinct” and it is, somehow, trans people’s fault.

PinkNews is happy to report that neither Nancy nor Lisa looked very extinct when we met over Zoom (in fact, record numbers of UK women are now openly lesbian or bisexual).

Both women talk energetically and enthusiastically about Stonewall, and, while admitting its not a perfect organisation, point to how for the past 31 years, it has fought unequivocally (once it “came to its senses” on equal marriage, that is) for the rights of lesbian, gay, bisexual and now trans people in the UK. These are some of Stonewall’s biggest wins, the benefits of which are enjoyed by queer people today.

Nancy, who took the helm of Stonewall in June 2020, moved to London in her 20s. “I didn’t have a totally rosy view of Stonewall then, I probably have a more rosy view of it now,” she remembers. “But I saw it very much as an organisation that was fighting for me. And I wanted to be part of that.”

She says that we don’t talk enough about how profound the effect the equalisation of the age of consent was.

“The visceral disgust, the ‘social contagion’ way of thinking about gay and bi men – and by extension all queer people – it was so embedded,” she says.

“And by saying that actually, having sex with each other is no more of a big or a small deal than it is for straight people and the law is going to recognise that, instead of this idea that gay sex was something that children and young people needed to be protected from…. It is profound, what that meant, really profound and it’s the foundation on which all of the other big changes were built.”

With the dubious accolade of being perhaps the most homophobic British law in living memory, Section 28 came into force in May 1988 and banned the “promotion of homosexuality” in schools, public libraries and other institutions. It wasn’t fully repealed until November 2003, meaning that a whole generation of adult LGBT+ people today went to a school where homophobic bullying went unchecked and teachers did not mention the existence of LGBT+ people.

“We were all feeling so embattled,” Lisa remembers of that time in the late 80s. “We’d just lost a really huge thing, the first retrograde legislation in a century on lesbians and gay men, as we would refer to ourselves then.”

“[Section 28] was really whipped up by the press, both the tabloids and the broadsheets. So, very similar to the anti-trans panic that’s going on now, all of the same tropes around damaging the children, worrying about going into toilets. The trans lobby used to be called the gay lobby.

“And then, after it was enacted, everything went very quiet. And actually, Section 28 was never used, because what happened was people self-censored. And so the law disappeared in a way. But what it did do was galvanise loads and loads of lesbians and gay men, partly who hadn’t seen that they had anything in common with each other before. But suddenly, this one law covered all of us. It was crappy to all of us. And it affected lots and lots of people who weren’t gay activists. It woke people up. Absolutely the opposite of what it was trying to do.”

Pushing corporations and the armed forces to include LGBT+ people

Another of Stonewall’s flagship successes has been its work in the business world. But this has not gone uncriticised by the broader LGBT+ movement.

Lisa, who says she was “a revolutionary and not a reformist”, admits that working with corporations “should be anathema to me”. And “I didn’t think the armed forces were that brilliant an idea at that time” she adds.

“But queers need jobs!” she says. “And a lot of those jobs are in big multinationals or supermarket chains, and Stonewall has made being queer normal.”

“I know it’s what most people want: a steady job, a nice home, a lover, and not to think that the government’s about to come down on you like a ton of bricks.”

LGBT+ lessons, and the first generation of kids who’ll learn about queers in the classroom

In September 2020, an LGBT+ inclusive education was rolled out for the first time in UK schools. The positive impacts of this will be long-lasting, just as the negative impacts of going to school under Section 28 have been.

And Nancy says that it’s “because of the work that Stonewall has been able to do, with the movement and with children’s organisations”.

“Children all over the UK at all ages are about to start going to school in schools where LGBT+ characters appear in books, where LGBT+ relationships are talked about. And I think it is almost impossible to overstate how seismic of a change that is going to make to our society,” she adds.

“I’ve got a six-year-old who will go to school and be taught about LGBTQ people. For his whole time in school. And I just think, that gives me such hope for the future.”

The young people in their first year of school now will be the vanguard of a new generation of kids, who grow up being taught about LGBT+ people and LGBT+ relationships.

“We don’t yet have a generation of young queer people who didn’t grow up thinking there was something wrong with us,” Lisa says. “We have all had that stuff internalised within us, and it can’t be good for us.” But no longer.

Rights can go back as well as forwards

Looking at the world now for LGBT+ people, it’s very different from the 80s. But there’s a long way still to go for LGBT+ equality, let alone liberation.

“It’s really important to remember not to get complacent,” Nancy says. “We think the arc is always progressive. But there is no room for complacency about LGBTQ inclusion in the UK right now.”

In the 70s, Lisa, who is a historian, wrote about the liberties that LGBT+ people enjoyed in Weimar Germany and Sweden in the 30s. But “they all got squashed” she says.

“Things can go down as well as up” Lisa continues. “And we have to always be on the lookout, because we may think things are getting better and better it only took five years for Hitler to dismantle the sexual liberties of Weimar Germany. And Trump was well on his way to getting there for the States.”

Both point to Poland as a place where LGBT+ rights have rapidly rolled back in a short amount of time.

Nancy says that “when you talk to Polish LGBT+ activists, they will tell you that four or five years ago things were beyond different, and they had no idea they would end up where they are where they are now”.

Lisa agrees that “the big threat is complacency. Not thinking that things can get worse, and not standing up to bullies”.

Nancy adds: “Our movement, like feminism, is going through this process of really reckoning with the fact that all of the big gains primarily benefit white, able bodied, middle class, relatively wealthy people.

“At Stonewall, we’re really trying to focus on who among our community is most marginalised. What are the distinctive experiences of LGBT+ people of colour? What are the distinctive experiences of disabled LGBT+ people? Because this narrative that a rising tide lifts all boats when it comes to human rights is not true. It’s demonstrably not true.”

Nancy is also passionate about refusing to accept that LGBT+ people should have worse mental health than our straight counterparts.

“I think there are some things we’ve come to accept that we should never have accepted,” she says. “And one of them is that mental-health outcomes for LGBT+ people are awful. We have to peel all of that lazy acceptance back and say, ‘No, this isn’t this isn’t right.’

“At Stonewall, we can imagine a world where LGBT+ people everywhere can live free, fulfilled lives. And I think that’s got to be the starting point. We have to stay committed to the idea that we can imagine that world. And if we can imagine it, then by working together we can bring that world into being.”