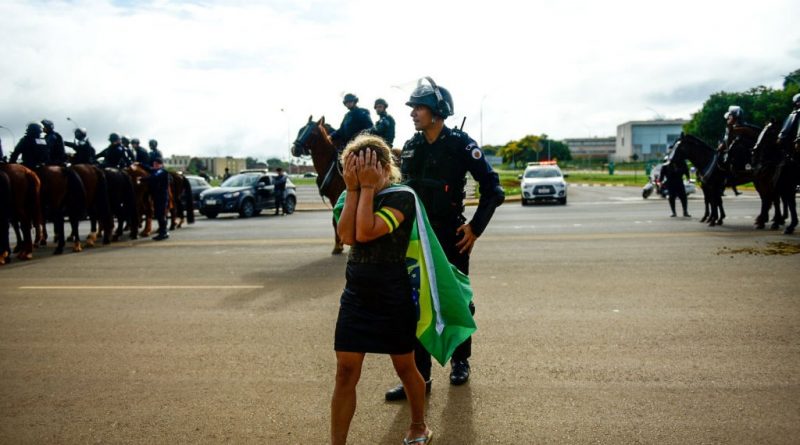 
Two years and two days after supporters of former President Donald Trump stormed the U.S. Capitol in protest of the 2020 presidential election results, arch-supporters of the ousted Brazilian leader Jair “Trump of the Tropics” Bolsonaro staged an insurrection of their own. Draped in the colors of the Brazilian flag, some thousands of Bolsonaro supporters descended onto the Brazilian capital and ransacked its pillars of government—including its Congress, Supreme Court, and presidential palace—in what has since been dubbed the most significant attack on Brazilian democracy in nearly 60 years.

Observers have long warned that Trump’s “Stop the Steal” playbook could spread to Brazil, where, like the former American president, Bolsonaro has spread unfounded claims of electoral fraud in order to undermine voter trust in an election that he ultimately lost. Now that it has, perhaps the biggest question hanging over the country is what Jan. 8 will mean for the future of Brazilian democracy and the Bolsonarismo movement trying to take it down.

A tale of two failed coups

But Bolsonaro and his most loyal supporters had other plans. Bolsonaro refused to concede defeat and unsuccessfully challenged the results, and his supporters began staging demonstrations and forming encampments outside the country’s military barracks, calling on the armed forces to intervene in support of Bolsonaro, an ex-army captain. While the military was ultimately called up to help restore order in the Brazilian capital, it did not do so at the behest of the Bolsonaristas, more than 1,200 of whom were arrested, according to Brazilian authorities.

Whereas the goal of Trump supporters on Jan. 6, 2021 was to stop the certification of President Joe Biden’s election victory, the aim of Bolsonaristas on Jan. 8, 2023 was ostensibly to force the military’s hand.

“This was clearly a bold-faced attempt to ask the military to intervene and to trash the institutions of democracy by doing so,” says Christopher Sabatini, a senior researcher fellow for Latin America at Chatham House and founder of Americas Quarterly. Unsuccessful as they were, Sabatini added, it’s still too soon to assess the damage, both physical and otherwise, done to Brazilian democracy, especially if security forces or federal authorities are deemed to have aided or abetted the attack. A pro-Bolsonaro federal district governor in Brasilia has already been removed from his post for 90 days over his failure to contain the attacks.

“Look at the pictures of Brasília right now and you see the military patrolling the streets,” says Sabatini. “That’s never good, even if they are doing it in this case to protect institutions.”

Bolsonaro, who watched the scenes unfolding in Brasília from thousands of miles away in Florida, issued a tweet denouncing the “destruction and invasion of public buildings,” but rejected criticisms by Lula that he was responsible for them—a somewhat dubious defense, given the former president’s longstanding effort to cast doubt on the reliability of Brazil’s electronic voting system, as well as his refusal to accept the legitimacy of his defeat.

While Bolsonaro did not goad his supporters to march on the capital as Trump did, his behavior before and after the election did enough to show them the way, says Sabatini: “You can’t give a mob the matches and the gasoline and point them towards a house and then say, ‘I wasn’t guilty of starting the fire.’”

Pressure is mounting from Washington for the Biden administration to extradite the former president back to Brazil, although the government in Brasília has not made a formal request. Any extradition plans could be further complicated by news of Bolsonaro’s hospitalization, which his wife Michelle shared on Instagram Monday. But regardless of whether Bolsonaro is ultimately held responsible for the attack on the Brazilian capital, the reality is that this crisis in Brazilian democracy isn’t necessarily bad for Bolsonaro.

Much like Trump, the former Brazilian leader has already succeeded in cultivating a politics of grievance and shoring up support among his base. While the events of Jan. 8 will undoubtedly undermine Bolsonaro at least temporarily, particularly among those in Brazil who feel that his supporters crossed a line, the Trump playbook suggests that the setback could be shortlived. Trump, after all, continues to enjoy the relevance of being seen as a de facto leader of the Republican Party—a role that, as the leader of the opposition, Bolsonaro also claims.

“He’s still got massive political capital,” says Oliver Stuenkel, a professor of international relations at Fundação Getúlio Vargas, a university and think tank in São Paulo. “It would be premature to think that this episode has weakened him.”

As of Jan. 9, Brazilian democracy remains stable, albeit weakened. How long that remains will depend at least in part on Lula, who pledged on Monday to prosecute the “vandals, neo-fascists and fanatics” who participated in the riots and his government. Should the Brazilian government learn anything from the U.S.’s experience with Jan. 6, it’s that while they may benefit from short-term unity in the aftermath of Jan. 8, maintaining that unity long enough to shore up Brazilian democracy will prove considerably harder—a weakness that Bolsonaro and his supporters will undoubtedly seek to exploit.

“They are going to remain a presence or at least a shadow on Brazilian democracy,” says Sabatini, “at least under Lula’s term, and probably indefinitely. This wasn’t just a flash mob—quite the opposite.”