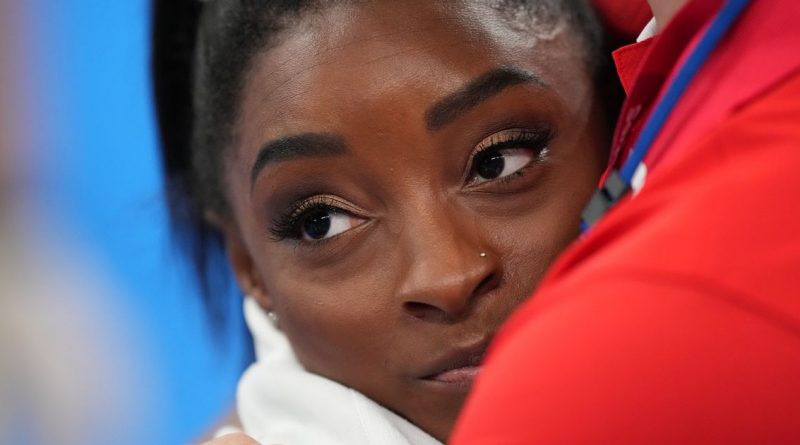 Whatever you make of it, something unusual is happening in the world of sport.

This week, US gymnast Simone Biles sent shock waves through the Olympics after pulling out of the women’s team finals to “focus on mental health”.

It follows on from other high-profile withdrawals like tennis stars Naomi Osaka, who withdrew halfway through the French Open, and Emma Raducanu, who walked off the court at Wimbledon and admitted the “whole experience caught up with me”.

While commentators like Piers Morgan have been quick to pounce on the supposed lack of a ‘winning’ mentality, others have praised the stars for using their position to open up the conversation about mental health.

So how should athletes conduct themselves? How do we all overcome struggles with anxiety and performance while Covid denies us many of our usual coping mechanisms.

Here, sports psychologist Dr Josephine Perry , who had worked with world-record setting Olympians, talks through the challenges athletes face and why they must define themselves as more than just the sporting superheroes we expect them to be.

We’re all much closer to the ‘red zone’

Over the last 18 months, I’ve seen a lot of people at my practice struggling with anxiety – and it makes perfect sense.

We’ve lost a lot of the autonomy, routines and habits we’re used to, and without these coping mechanisms, it only takes a little to tip you into the ‘red zone’.

Now imagine you’re an athlete. On top of the huge media pressure and expectation to perform at the highest level, you’re dealing with all the same challenges that everyone else has.

I’ve talked to sportspeople who compete and live overseas, often at a very young age, who made those decisions with the knowledge they could at least travel back to see their families. Instead, they’ve spent more than a year and a half without them.

Yes, they can still train, but they can’t recover or relax in the ways that would usually help them get to their peak.

Any athlete will tell you: it’s the negative messages that stick

Then you have the media pressure.

A few years ago, I did some research with 10 Olympic athletes about how they engaged with the media.

One told me it doesn’t feel like the Games until the big press conference happens. “That’s when it kicks off,” they said. “It gets me the adrenaline I need.”

Yet while some actually enjoy it, for others it is very debilitative. It really hold them back and plays on their mind – they’re worried the whole time about what they have to say to a journalist afterwards or how they might be judged.

If you’re built up as someone who is expected to win, you almost cannot win. Succeed and it’s expected; fail and you haven’t just failed – you haven’t done what was expected of you and it’s doubly harsh.

The logic your family will tell you is that it’s just one event, you’re an inspiration to others and that they love you no matter what.

But then you have a barrage of social media abuse from people who have no idea what they’re talking about. No idea about the effort, the paid and investment you’ve put in over decades.

However resilient you are, these messages stick. The athletes I talked to all say that while they might get a hundred lovely messages, it’s the one negative comment that they take to heart.

At Tokyo, the need for connection is greater than every. Competitors haven’t got friends and family with them and they really need that support.

Got a story? Get in touch by emailing webfeatures@trinitymirror.com

But when they turn on their phones to talk to mum and dad, they can have a dozen messages pop up from strangers giving their opinions about their mental health, whether they wimped out or have a big nose.

At a time when they need to be protected to focus on their performance, what they get instead is someone intruding on that space every time they pick up their phone.

Let’s be clear: athletes don’t compete in their sport to become stars.

Reality TV hopefuls might know what they’re getting into, but athletes do what they do because they are very, very good at their sport and want to do their absolute best.

No one walked into a gymnasium aged three or four and wonders, ‘Am I going to be resilient enough to bounce back from the knocks of armchair fans who don’t like what I do?’

And for sportspeople, performance anxiety is a unique challenge.

If you or I had performance anxiety, we could probably bluff our way through it.

We’d feel awful, we’d have a lot of physiological reactions going on in our body, but we could probably just get through it and survive.

For a gymnast or certain other sports, if they have high levels of performance anxiety, they will have adrenaline and cortisol flooding their body.

This means their heart rate goes up, their breathing goes up – they get shaky hands, incredibly tight muscles and lose their peripheral vision.

If you’re trying to do an incredibly dangerous move and you don’t have 100 per cent control of your body, it would be incredibly irresponsible to try and perform with that.

Should you not pull it off or something goes wrong, the team will all do badly. So to say, ‘I’m not in the best place to do this right now, it would be better if someone else did’ can sometimes be the best way of putting the group’s interest first.

Normalising struggles will help us all

It’s awful when athletes find themselves in a position where they feel the need to pull out, but I applaud the fact many are willing to be so vocal about it.

Of course, none of us are doing incredibly dangerous moves in front of the watching world, but we all have our own elements of performance anxiety in life to contend with.

It might be taking a driving a test – it may be doing a big presentation or going to a job interview.

When we’re able to realise what’s going on with our bodies and that other people go through it too, it normalises the situation and this can be incredibly helpful.

It doesn’t mean we have to give up on doing scary things. But it might mean that someone can be on hand to give you advice, or that you can feel able to look up techniques to reduce anxiety and achieve your goals.

What stuck with me was when I asked the interviewees what success meant to them.

No one said gold medals, money or being famous. Rather, it was about finding contentment, achieving purpose and building communities.

I use this all the time with athletes. When you know your real purpose, it gives you something to work towards and helps remove some of the anxiety you have.

How do you define your values? What matters to you? Too often in society, we judge ourselves by other people’s metrics.

At the Olympics, we measure our athletes by what colour medal they get, how fast they go or what score they get.

It’s helpful for us as viewers, but won’t match the individual values of these athletes at all.

When an athlete – or any of us – understands our own values more, we can start to create our own metrics of what matters to us.

If your real value is truth and honesty, then actually many of those who have said, ‘This isn’t right, i’m not continuing’ are living that metric and being much more authentic to who they are.

I’ll often get an athlete who comes to me whose entire self-identity is their sport.

It’s like a stick of rock you get at the beach: snap it in half and you’ll see Brighton all the way through it.

These athletes are like that: snap them in half and it will say ‘runner’ or ‘cyclist’.

This is very unhealthy, because when you’re only one thing, any attack on that whatsoever – not succeeding, being criticised or getting injured – will leave you in a very bad place.


We want athletes to have more than one string to their bow, to have a wider self-identity because that will really protect their mental health.

These techniques can absolutely help anybody too. That’s what’s so enjoyable about the young people I work with – they realise the lessons they learn will help them just as much in school as they do in sport.

If we can teach kids more about mental health in class – learning the neuroscience about what’s going on in your brain when you’re angry, frustrated or worried – it would be phenomenal for our understanding.

To know that this is normal – and that we can talk about it.