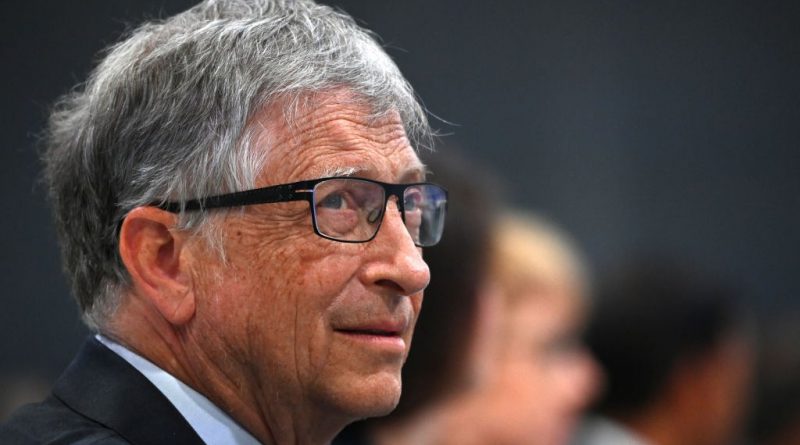 
On Sept. 25, 2015, at the United Nations headquarters in New York, 193 world leaders committed to a series of ambitious objectives and targets to end poverty, fight inequality and injustice, and fix climate change by 2030. Now at the halfway point, the 17 Sustainable Development Goals, as they are known, are significantly off track, largely due to the confluence of Covid 19, climate change, and conflict.

According to the annual Goalkeepers report published today by the Bill & Melinda Gates Foundation, the world would need to speed up progress five times as fast to make the 2030 deadline. It may sound like a depressing prognosis, write Bill Gates and Melinda French Gates in the report’s introduction, but they add that there is real hope and opportunity in innovation. “Human ingenuity can render our careful projections irrelevant and make our boldest aspirations seem timid.”

On the eve of the report’s release, TIME spoke with Bill Gates about the next steps. The key message, he said, is prioritizing Africa despite the combined strains of the post-pandemic economy, climate change, and the war in Ukraine: “Because it is about millions of lives, [Africa] is more critical now than ever.”

TIME: The war in Ukraine has disrupted food supply chains globally, bringing some countries to the brink of famine. But in your report, you note that maize crops in Africa—responsible for one third of the continent’s calories—could be reduced by 25% by the end of the decade due to higher temperatures. How much more of a threat is climate change?

Gates: Heat is your enemy. Get above a certain temperature and maize productivity drops a lot. If you get really, really hot, you eventually have to switch to something like sorghum [a high-protein cereal grain], which evolved to deal with very high temperatures. Now, we face not only population growth, but climate change, which of course was caused by rich countries but is far more acute in the problems it causes poor subsistence farmers.

So, what is the best way to combat this?

Of course, you have to provide food aid, but that isn’t the solution. You’ll just be back providing food aid again and again because of population [growth] and climate [change]. So, we are saying that we need to get Africa to be self-sufficient. African food productivity is about a quarter of what rich countries, including the U.S., are able to achieve. That’s tragic because Africa should be a net food exporter as the cost of land and the cost of labor is very low. If you don’t have a credit system [to buy better seeds, fertilizer, and pesticides], and you don’t educate farmers—both men and women farmers—then you don’t get this extra productivity. If they had the right ingredients, they would benefit from those assets.

If donations aren’t the solution, what is?

It starts with better seeds. We want the Green Revolution [a crop science intervention that transformed Asian agriculture in the 1970s] for Africa. We say we care about climate adaptation, yet we haven’t fully funded the research [on climate-adapted seeds], and we haven’t funded the education of farmers. It’s a tragedy.

What are some of the technological interventions or innovations that we can use to get better quality seeds?

I’ll give you two that are probably a decade off. One is that you can make photosynthesis more efficient. Science magazine had a cover on some work we funded that saw a 20% improvement [in soybean yields]. That’s a very promising area, although it will take time. Another is leguminous crops, [beans, peas, and lentils] including soybeans that work with fungi and bacteria in the soil to create their own nitrogen—their own fertilizer. So we’re taking that leguminous nitrogen fixation pathway and moving it into other crops including rice, wheat, maize, sorghum, and millet; that looks very promising.

That sounds promising, but you are talking about transgenic modification—GMOs. That is something that has become taboo in many circles. Do we need to get over that hesitation to ensure a better food supply in the future?

Some of these seeds actually aren’t full GMO. Some of them use what’s called gene editing, which is no different than normal crossbreeding. But in the leguminous example you are taking genes from soybeans and moving those [into other plants] so it will be subject to a high regulatory standard, and we have no issue with that. In areas where climate change is raising already very high levels of malnutrition and threatened starvation, well those countries should look at the safety record and look at the data and be able to use modern seeds. Just like vaccines—at some point you’ve got to say “Okay, we have the safety data, we don’t want to starve, so let’s go ahead.”

What about more immediate solutions?

We do have some things that are much more near term, like avoiding cassava diseases that are spreading throughout Africa. Cassava is a root crop that you only pull out when there’s an emergency, like in a year where you have bad weather. But if it is diseased, then you really do have severe malnutrition. [We have developed] a way to prevent cassava mosaic disease using a technique called RNA interference.

NYC Climate Week starts on Sept. 19, alongside the UN General Assembly meetings. What is the single most important thing global leaders need to do to address climate impacts in the developing world?

Most of the people in poor countries are farmers, and most of them are farmers with very small amounts of land and not much capital. So, getting them weather data so they know exactly when to plant, and mapping their soils so they know the exact amount of fertilizer to use, is even more important when you get better seeds.

Small and developing nations that are the most affected by global warming are pushing for climate finance and loss and damage payments. What is the best and fairest way to set this up?

I have to admit that with the pressure on European budgets stemming from the war in Ukraine, in terms of defense costs and electricity costs and refugee costs, the idea of maintaining a commitment to climate adaptation and to helping Africa in particular [is not easy]. But having stability in African countries is a good thing. If countries aren’t functional, they won’t spot outbreaks that can lead to pandemics. A farming crisis in Syria was a significant part of the unrest [that led to war]. The war showed that the mass migration is troubling, even if you didn’t care about people in Syria, which of course we should.

How much responsibility do wealthy nations have to provide funding to help the developing world deal with climate change?

Ideally, we want rich countries to give 0.7% of [their] GDP [to fund climate adaptation]. It’s not a gigantic sacrifice. We need to focus our aid on low-income countries, and particularly on the agricultural piece, where the climate is creating this incredible problem. The innovation pipeline is very exciting. One piece of R&D can benefit millions of farmers. That’s pretty dramatic for both health and agriculture. So, if we can’t fund the CG system [a scientific group that develops climate-adapted, public domain seeds for poor farmers] for 2 billion [dollars] a year, as well as the downstream piece which is helping countries adopt those seeds, then it won’t look like we’re at all serious about climate adaptation. [Right now] I look at that CG funding number and say, “Are we serious about adaptation or do we just like meetings?”