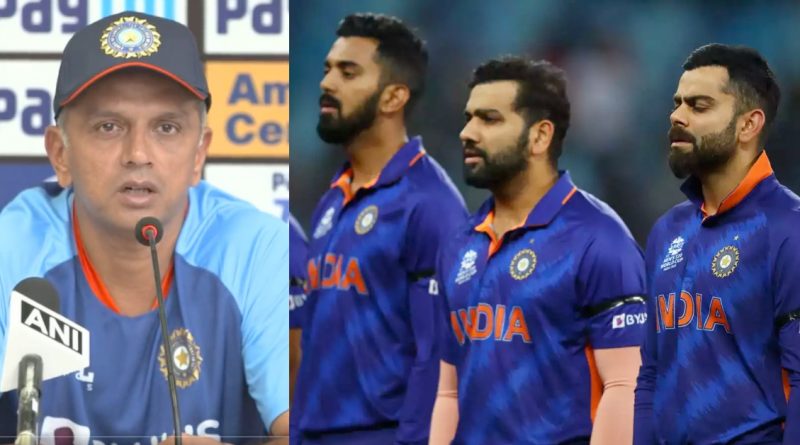 
India team head coach Rahul Dravid has shut down the criticism of the top three batters of the Indian batting lineup in captain Rohit Sharma, vice-captain KL Rahul and former captain Virat Kohli and said that the team management knows what quality players these three are and called them world-class.

The troika of skipper Rohit Sharma, KL Rahul, and Virat Kohli have been in the sight of critics for their slow approach to the T20 format, utilizing balls in order to set themselves up for an explosive finish. But many times, they fail to bat through and this puts pressure on the other batters.

Rohit Sharma and Virat Kohli even endured a poor IPL 2022 themselves, with the MI captain failing to score a single fifty in the tournament, and Kohli scoring three golden ducks in the IPL 15. KL Rahul however, did well, scoring 616 runs for debutant franchise LSG, but was slammed for his slow batting.

During a press conference ahead of the first T20I against South Africa in Delhi on June 9, Rahul Dravid spoke about understanding the quality of Rohit Sharma, KL Rahul, and Virat Kohli and expects them to give “good, positive starts” going into the World Cup.

Dravid gave clear hints that he is in no mood to tinker with the top three even though the regular skipper and the team’s No. 1 batter have been rested from the series against South Africa.

“We know our top three’s quality. They are top class. There will be a slightly different top three in this series but what we are looking for (in general) is a good positive start and playing according to the situation. If it’s a high-scoring game, then obviously you want your players to maintain the strike rate. If the wicket is more challenging, then they have to respond to that as well,” Dravid said on the eve of the first T20 International against South Africa.

The first T20I will begin on June 9 in Delhi.

Also read: Wriddhiman Saha Has Kept A Couple Of Avenues Open For Himself