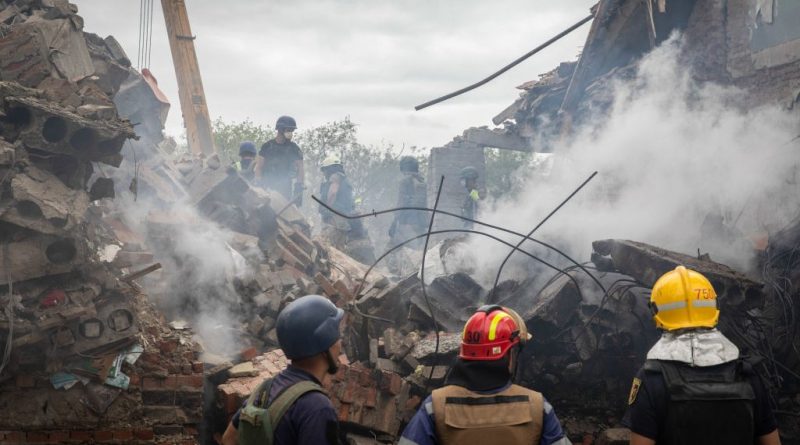 
If President Biden really wanted to escape his political morass he might consider saving Ukraine.

His approval ratings—31%—are worse even than former President Trump’s. Americans are unhappy about the worst inflation in forty years. At over 9%, inflation is U.S. voters’ top concern, and political analysts expect a Democratic rout in the midterms as these frustrations are voiced.

Biden, and the U.S., is not alone in this. In Europe the situation is worse and worsening. Overall inflation in the E.U. is 9.6%, with energy prices up over 42% and food up over 9%. This is likely to climb much, much higher while Russia holds the continent hostage over energy supplies. And yet, it could well prove that inflation may not be the worst of it. For if we have Russia and its crippling of Ukraine to thank for inflation, we have it plus our bungled response to the invasion to thank for the global recession that is now feared—indeed, expected—throughout the world.

To try to fix inflation, monetary authorities are increasing interest rates at a speed that will push economies into recession. The goal is to cool off the economy, reducing consumption to reduce prices. The desperation of central banks reflects that of ordinary citizens. Governments around the world are already beginning to be held to account as voters voice their malcontent with leadership they hold responsible for economic mismanagement. Notable leaders to be rebuked since the February 24 Russian invasion of Ukraine include French President Emmanuel Macron, U.K. Prime Minister Boris Johnson, and Sri Lankan Prime Minister Mahinda Rajapaksa. Inflation played a big role for each. Anti-inflation protests have also been seen in Albania, Argentina, Panama, Kenya, and Ghana, among others. In the U.S., Biden’s dismal approval ratings suggest such protests have already arrived here.

And yet, a keen electoral defeat may be within Biden’s powers to avoid. When French President Emmanuel Macron lost his parliamentary majority in June, he acknowledged that the Russo-Ukrainian war is having “a profound impact on many things,” and that “it wasn’t sufficiently taken into account in France’s public debate.” The same is true in the U.S. Normally, a presidential administration has very few traditional macroeconomic and monetary tools at its disposal to stop inflation. Presidents simply do not wield much control over the economy in the near to medium term. But the current situation is not a traditional one. Although some of today’s inflation is fully attributable to supply chain crunches and demand spikes as the world awoke from COVID-19 lockdowns and malaise, a very significant portion of it is a consequence of the Russian invasion of Ukraine. The President does have the ability to fix that.

The critical importance of Ukraine in the global economy has become blindingly clear in the last five months. Until February 24, Ukraine was arguably the most geo-strategically important country in the world most people would have failed to find on a map. Now, it is indisputably the most important country in the world that we are not saving, to our own mortal danger. We, the rest of the world, will not fix our own economic woes and the political fallout therefrom until we make the difficult decision to actually, really save Ukraine.

Ukraine was, before Russia’s February 24 invasion, an economic powerhouse with a vastly underappreciated role in global supply chains. Its grain exports were at least 10% of the world’s; 12.8% for maize, 10.5% for wheat. Ukraine produced more than 45% of the world’s sunflower oil. It was also a mining and industrial power; the fourth largest iron ore exporter and the 13th largest steel exporter. And it exported significant nickel, uranium, and other minerals, and manufactured and exported chemicals, engines, heavy equipment, and more. These are examples.

Although not an energy exporter for the most part, Ukraine was critical as an energy transit country. Before 2020, more than half—about 70 billion cubic meters (bcm)—of the E.U.’s yearly average 170 bcm of natural gas imports from Russia transited Ukraine. Notwithstanding some recent Russian shenanigans that left Canada bypassing international sanctions to give Russia’s Gazprom pipeline equipment in exchange for Russian promises of higher gas flows, the Nord Stream 1 pipeline to Germany was shut down entirely for most of July for so-called “maintenance”. Russia had already retaliated in June against the west by cutting off supplies to Poland and Bulgaria, and mostly also to Germany, France, Italy, Slovakia, and others. On July 14, Gazprom claimed force majeure, arguing that an “Act of God” (read: on order of President Putin) prevented it from supplying Europe with natural gas. Despite gas flows back at 40% as of July 21, experts see obvious Russian manipulation. And although it has not happened yet, Europe is now readying for a complete cessation of gas supplies from Russia, which will send energy prices to unimaginable heights and further turbocharge inflation. People may die for want of heat this winter while Putin gets richer on inflated energy prices.

Read More: Ukraine Is In Worse Shape Than You Think

The importance of Ukraine for these and other global supply chains means that the interest rate hike approach most governments are taking to address inflation is poorly tailored to the problem. Most simplistically, rate increases are demand-side adjustments, whereas the problem underlying inflation currently is supply-side. In other words, strictly speaking, the problem is less that there is too much demand, and more that there isn’t enough supply. The war in Ukraine is wreaking havoc on supply chains. Russia’s blockade of Ukraine’s Black Sea ports, through which Ukrainian farmers export agricultural products, has created a global grain and cooking oil shortage, for just two examples. A Turkish-brokered deal between Russia and Ukraine to create a grain export corridor is almost certainly a ruse by Russia, much like its Nord Stream 1 natural gas prevarication.

It is hard to precisely calculate how much of the global inflation crisis is due to Russia’s invasion of Ukraine, but the effect is marked. According to the U.N. Development Program, 71 million people have been pushed into poverty by Russia’s aggression and its consequences. That’s not 71 million Ukrainians (there are only 45 million), but rather vulnerable people all over the world suffering from inflation and shortages triggered by the Russian invasion of Ukraine. The U.S. Federal Reserve estimated in May that its fallout will ultimately reduce global GDP by 1.5% in 2022 while contributing 1.3% to 2022 global inflation. The Fed attributes this to consumer unease, high commodity prices, scarcity, and tight financial conditions.

Unfortunately, it is reasonable to assume the Fed’s estimates are overly optimistic. Governments, the U.S.’s included, have proved themselves very poorly prepared for all aspects of Russia’s assault on Ukraine and the liberal world order. The U.S. government in particular has also poorly predicted the arc of inflation, even prior to the invasion. Together, these failures suggest that modest assessments of the impact of a crumbling Ukraine on global supply chains probably grossly underestimate its contribution to the world’s economic problems. Geopolitical instability and commodity shortages caused by the invasion are a big part of skyrocketing inflation. Put simply, the war in and on and against Ukraine is having an absolutely catastrophic impact on prices.

This could have been prevented. If western governments had committed early in (or even before) the invasion to saving Ukraine instead of proclaiming loudly that they would not directly engage, Russia would not have been able to blockade the Black Sea and sever Ukraine’s export routes for agricultural and industrial commodities. If the U.S. had better prepped global energy decision makers and markets to replace Russian oil and natural gas in 2021 when it started announcing its certainty that Russia was going to invade Ukraine, Europe may have been in a better position now to withstand Russia retaliation. If NATO had taken decisive military action to stop Russia as this began, Russia may not have caused a 55% drop in Ukrainian GDP. Russia could have been stopped, but it was not, and the world is suffering the consequences. Predictably, voters all over the world are increasingly dissatisfied with their political leadership for the consequences of their inaction—record inflation.

Whether voters connect the war in Ukraine to their slimming pocketbooks is immaterial. The focus of average citizens has shifted from full throated support for saving Ukraine to anger over inflation. There may no longer be broad support for decisive action to save Ukraine, because, as some say, the government should be taking care of its own first.

Awareness of the importance of Ukraine notwithstanding, the cause and effect are clear. The longer the war, the worse the global economic outlook. Now, at five months of Russian brutality, Ukrainian farmers are planting 30-60% less wheat and barley for this winter. Where a single Ukrainian planting or harvesting season disrupted by war is a disaster, two will cause a global famine.

Eventually, probably over years, the Fed’s demand-side monetary policies will almost certainly tame inflation, but most likely only by triggering a recession that will cause average citizens additional hardship. If the war continues for many more months or years, an equivalent amount of time would be necessary to claw prices back down to normal absent a bad recession or even depression. During that prolonged period, it is hard to see how voters will be better off.

In the meantime, they will have plenty of time to vent their malcontent at the ballot box by voting out the same leadership that has been, albeit somewhat indecisively, supporting Ukraine and obstructing Russia. This would hand Putin victories against his political and existential enemies in democracies around the world. It could also mean that new, pro-Russian governments, such as a President Marine Le Pen in France or a second term for President Trump, are given an opportunity to retract sanctions. This would functionally reward Putin for invading Ukraine. So rewarded, he could reasonably be expected to try again, perhaps with an E.U. country.

A better approach would be for western governments to take the difficult decision now, the one they have been putting off for months, to actually save Ukraine, whatever that may require. Doing so would serve as a supply-side correction on inflation caused by supply-side shortages. Ukrainians could return immediately to their farms, steelworks, factories, and ports. This would therefore work far faster than then long-term rate hike game and cost our economies far less in the long run. It could cost us less in political turmoil, too, as inflation decreases might arrive in time to save western governments not yet up for reelection.

Saving Ukraine would also be a demonstration of leadership that could perhaps win back disenchanted voters in the U.S., Europe, and elsewhere. It could keep leadership in place that protects the liberal world order and keeps Russia in check. The world should have learned by now how important Ukraine is. It is not yet too late to save ourselves by saving Ukraine.