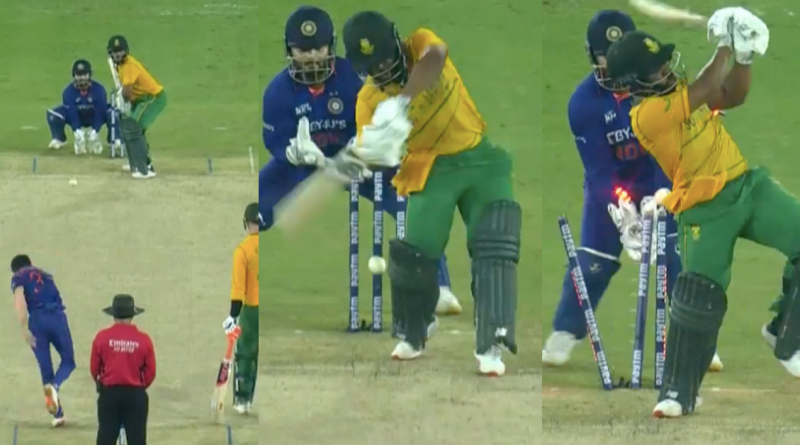 Yuzvendra Chahal didn’t have a good outing in the first match of the T20I series against South Africa and he was given only 3 overs by skipper Rishabh Pant.

In the second T20I, Chahal started off very well by giving away just 4 runs in his first over. However, in his second over he got smashed for 13 runs.

In his third over, which was the 13th over of the match, the leg-spinner broke the 64-run partnership between Temba Bavuma and Heinrich Klaasen by dismissing the former. And Bavuma scored 35 runs off 30 balls, including 4 fours and 1 six.

Notably, Chahal got smashed for a four by Bavuma on the first ball of the over. On the next ball, Chahal bowled a fuller length delivery and the Proteas captain misjudged the length and went for a pull. Bavuma got beaten and the leg break delivery rattled the stumps.

Veteran India pacer Bhuvneshwar Kumar looked sensational in the second innings of the second T20I against South Africa. He was getting some help from the surface and he utilized every bit of it to destroy the South African batting unit.

Chasing the target, Reeza Hendricks was cleaned up by Bhuvneshwar Kumar in the first over itself. Then the veteran pacer Bhuvneshwar dismissed Dwaine Pretorius and Rassie van der Dussen in the 3rd and 6th over and at the end of the powerplay, South Africa were at 29/3.

Also Read: IND vs SA: Revealed – Why Quinton De Kock Is Not Included In South Africa’s Playing XI vs India In The 2nd T20I In Cuttack