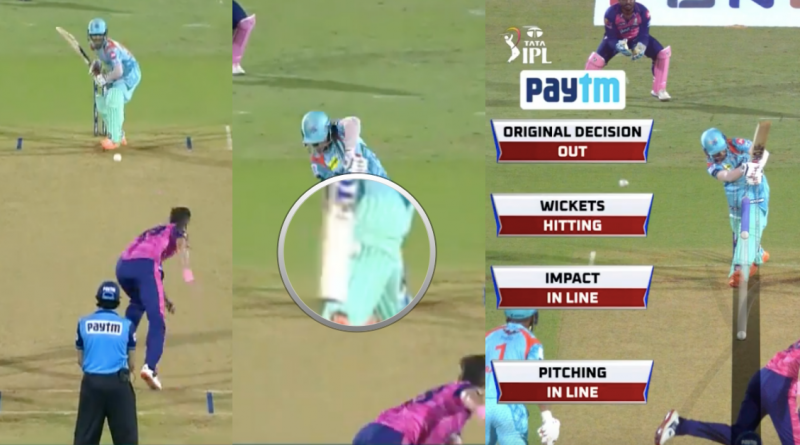 
The 22-year-old Lucknow Super Giants (LSG) batter Ayush Badoni was cleaned up by Rajasthan Royals (RR) left-arm pacer Trent Boult in the 63rd match of the Indian Premier League (IPL) 2022 at the Brabourne Stadium in Mumbai on Sunday, May 15.

The young Lucknow Super Giants batter Ayush Badoni had impressed everyone with his performance in his Indian Premier League (IPL) debut as he smashed brilliant 54 runs under pressure against Gujarat Titans (GT).

However, since hitting 54 runs in his Indian Premier League debut for Lucknow Super Giants the 22-year-old has played 10 innings and his highest score in those 10 innings is 19*.

Meanwhile, he was cleaned up for a golden duck by New Zealand pacer Boult on the second ball of the 3rd of the match between LSG and RR.

Boult dismissed Lucknow Super Giants opener, Quinton de Kock, for 7 on the first ball of the 3rd over and on the second ball, he trapped Badoni LBW with an incredible inswing delivery.

It clearly looked out but after having a chat with skipper KL Rahul the 22-year-old decided to use DRS, which was eventually wasted because there was no bat and ball and the ball was smashing the middle stump.

Earlier, Rajasthan Royals were able to score 51/1 in the powerplay overs after losing the wicket of orange cap holder Jos Buttler.

Meanwhile, RR skipper Sanju Samson was dismissed for 32 by pacer Jason Holder in the 9th over. Then, Ayush Badoni broke the 26 runs partnership between Devdutt Padikkal and Yashasvi Jaiswal by dismissing the latter, who scored 41 runs off 29 balls, including 6 fours and 1 six.

Also, Devdutt Padikkal scored amazing 39 runs off 18 balls, including 5 fours and 2 sixes before getting dismissed by leg-spinner Ravi Bishnoi in the 14th over.

After that, Riyan Parag, James Neesham, Ravichandran Ashwin and Trent Boult made significant contributions to help RR post 178/6 on the board.