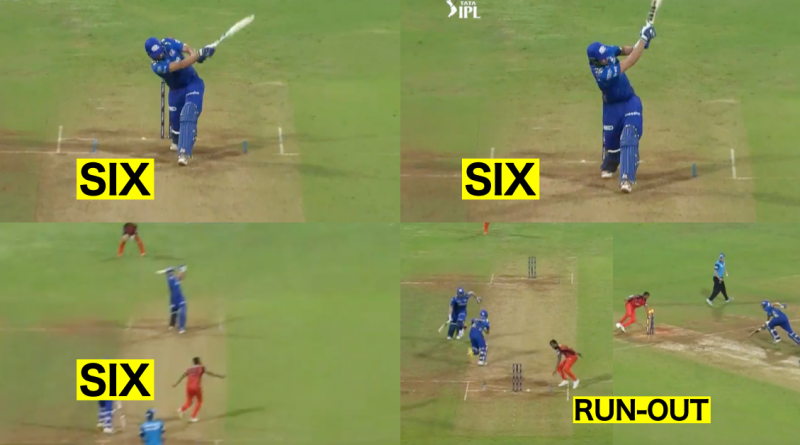 
Mumbai Indians (MI) Tim David had an eventful 18th over bowled by Sunrisers Hyderabad’s T Natarajan in the 65th match of the ongoing Indian Premier League (IPL 2022) being played at the Wankhede stadium in Mumbai on May 17, 2022.

Rohit Sharma won the toss and chose to bowl first. MI made two changes by leaving out Kumar Karthikeya and Hrithik Shokeen and bringing in Sanjay Yadav and Mayank Markande. And for SRH, Priyam Garg came in for Shashank Singh and Fazal Farooqi replaced Marco Jansen.

Garg made an immediate impact as an opener, scoring 42 in 26 balls with four fours and two sixes, while Abhishek Sharma fell for 9 runs. Garg added 78 runs for the second wicket with Rahul Tripathi, who top-scored for Sunrisers with 76 in 44 balls with 9 fours and 3 sixes to his name. Nicholas Pooran added a quick 38 runs in 22 balls with 3 sixes and 2 fours.

However, Ramandeep Singh took 3/20 in his 3 overs, while Daniel Sams, Riley Meredith, and Jasprit Bumrah took one wicket each as SRH posted 193/6 in 20 overs.

Mumbai Indians started off well with Rohit Sharma (48) and Ishan Kishan (43) adding 98 runs for the first wicket in 10.4 overs. But once both of them got out, Umran Malik was unleashed on MI batters by Kane Williamson.

Malik took the wickets of Kishan (43), Daniel Sams (15), and Tilak Varma (8) in a spell of blistering pace bowling. MI were looking in deep trouble with 45 needed in 18 balls when T Natarajan came onto bowl with Tim David at the crease.

He was hit for a six off the second ball while bowling a wide next and a dot ball after that. But then in an effort to bowl yorkers, Natarajan served up three full tosses to David and he deposited three consecutive sixes in three balls, with one going all the way to 114 meters.

With the last ball coming up, Natarajan bowled a length ball at the eighth stump and David only managed to hit it back which hit the non-strikers’ stumps. Ramandeep Singh at that end started to run seeing David haring down the wicket to retain strike for the next over.

But they stuttered for a bit and in meantime, Natarajan gathered the ball and got the bails off the stumps and David was run out for 46 in 18 balls with 4 sixes and 3 fours.

Here is the video of how everything unfolded between T Natarajan and Tim David: