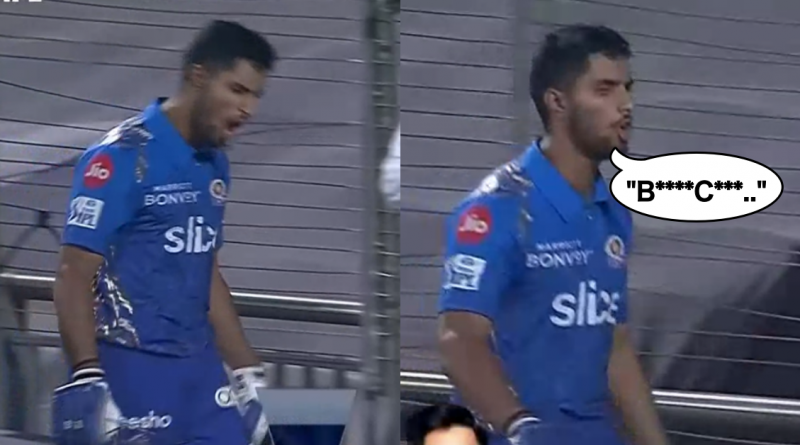 The ongoing IPL 2022 match between Mumbai Indians (MI) and Punjab Kings (PBKS) at the DY Patil Stadium in Pune, saw young Tilak Varma burst out in abuse after being hanged to dry in the middle by Suryakumar Yadav and was run out as a result.

MI came into this match looking for their first win after four straight losses at the start of the Indian Premier League (IPL 2022) and started off well as captain Rohit Sharma won the toss and chose to bowl first.

However, the bowling side of things didn’t went their way as Punjab Kings posted a huge 198/5 in 20 overs. Shikhar Dhawan top-scored with 70, while PBKS captain Mayank Agarwal made his first half-century of his tournament, making 52 runs. However the impetus to the innings was given by Jitesh Sharma, who made 30* in just 15 balls with 2 fours and 2 sixes, including hitting Jaydev Unadkat for 23 runs in one over.

Tilak Varma Gets Run Out After A Mixup With Suryakumar Yadav; Goes Off Muttering Abuses In Frustrations

Rohit Sharma started off nicely hitting 28 in 17 balls with 3 fours and 2 sixes to his name, while fellow opener Ishan Kishan fell for 3 runs. MI looked a bit behind the net run rate but then Dewald Brevis smacked Rahul Chahar for 4 sixes in an over and collected 29 runs in his six balls.

He got out for 49 runs in 25 balls, while Tilak Varma was looking good at the other end. The duo had added 84 runs for the third wicket and Varma took over the hitting duties skimming 2 sixes and 3 fours in his 20-ball 36.

However, he was run out after a mixup with Suryakumar Yadav. Tilka had hit the ball to mid-wicket and set off for a single. But Suryakumar was not focused on his partner and by the time he responded no, it was too late. Mayank threw the ball to Arshdeep, who disturbed the stumps and ran Tilak out. He was not a happy chap and went off muttering abuses.

MI vs PBKS: Watch – Tilak Varma Abuses In Frustration After Being Ran Out By Suryakumar Yadav: