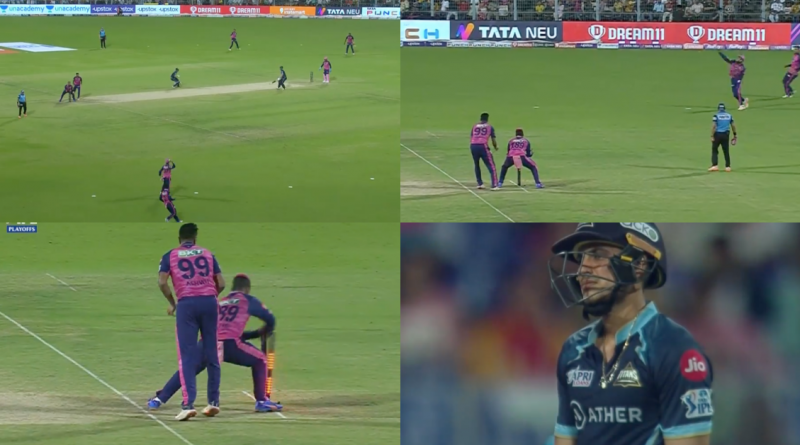 
Star Gujarat Titans (GT) opening batsman Shubman Gill got run out in Qualifier 1 of the Indian Premier League (IPL) 2022 at the Eden Gardens in Kolkata on Tuesday, May 24.

The young opening batsman was batting brilliantly after losing his partner, Wriddhiman Saha, for a duck in the first over. Gill looked comfortable out in middle and smashed some beautiful looking boundaries to off-spinner Ravichandran Ashwin.

However, he got run out on the 4th ball of the 8th over after getting involved in a horrible mix-up with Australian wicketkeeper-batsman Matthew Wade. Gill’s innings ended at 35 runs of 21 balls, including 5 fours and 1 six.

Notably, Ravichandran Ashwin bowled a carrom ball to Gill and the GT opener played it towards the midwicket region. He completed the first run easily and went for the second run.

However, Wade backed out at the striker’s end and Gill was halfway down the track. Gill was in no position to reach back to the non-striker’s end and the Rajasthan Royals fielders Devdutt Padikkal and Shimron Hetmyer did the rest of the job.

This was the eighth run out for Gujarat Titans in the Indian Premier League 2022, which is the second-most this season after Mumbai Indians’ 13 run-outs.

Earlier, Gujarat Titans won the toss and opted to field first in the match. Left-arm pacer Yash Dayal got the first breakthrough for Gujarat Titans in the second over by dismissing Yashasvi Jaiswal for 3.

Then, Sanju Samson played a sensational innings before his innings was brought to an end by Ravisrinivasan Sai Kishore on the 5th ball of the 10th over. Samson scored 47 runs off 26 balls, including 5 fours and 3 sixes. Also, he added brilliant 68 runs off 47 balls with opener Buttler.

In the end, Jos Buttler played a stellar knock to help Rajasthan Royals score 188/6. The English wicketkeeper-batsman was able to score 89 runs off 56 balls, including 12 fours and 2 sixes.

Also Read: GT vs RR Weather Report: Explained- What Will Happen If IPL 2022 Qualifier 1 Gets Washed Away Due To Rain?

GT vs RR: Watch – Shubman Gill Gets Run Out After A Horrible Mix-up With Matthew Wade In IPL 2022 Qualifier 1: