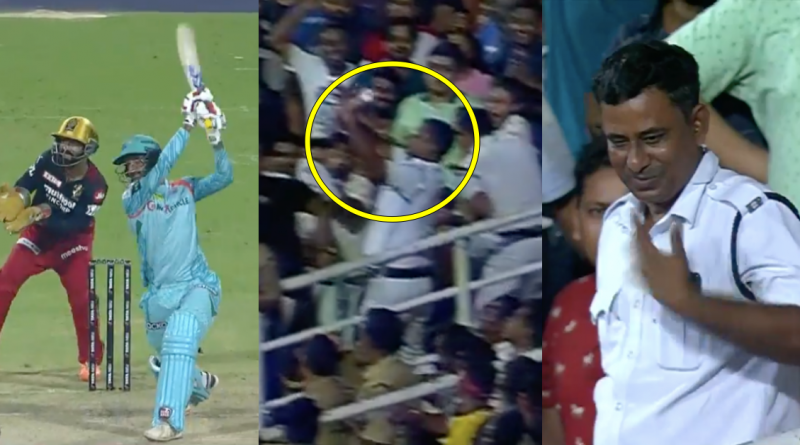 
Deepak Hooda tried his best to get the run rate going up and hit Shahbaz Ahmed for a six, which ended up hurting a policeman in the Eden Gardens stands as Royal Challengers Bangalore (RCB) clashed with Lucknow Super Giants (LSG) in the Eden Gardens in the Eliminator match of the IPL 2022 in Kolkata on May 25, 2022.

Lucknow Super Giants (LSG) captain KL Rahul started off on a good foot, winning the toss and choosing to bowl first. And they lost captain Faf du Plessis for a golden duck as well. However, Rajat Patidar got stuck into the LSG bowlers and smacked them around the Eden arena nonchalantly.

Though LSG managed to get Glenn Maxwell (9) and Mahipal Lomror (14) early, Patidar found an equally destructive partner in Dinesh Karthik. The duo added 92* runs in 41 balls in the last overs as Patidar finished on 112* in 54 balls with 7 sixes and 12 fours, his maiden ton in T20 cricket and in the Indian Premier League, while Karthik slammed 37* in 23 balls as RCB made 207/4 in 20 overs.

In reply, Quinton de Kock was dismissed early for 6 runs by Mohammed Siraj, and Mana Vohra fell to Shahbaz Ahmed for 19 runs. However, captain KL Rahul anchored one end as he was joined by Deepak Hooda.

Both the batters tried to add impetus to the innings and Hooda was the one to take initiative as in the 8th over, bowled by Shahbaz Ahmed, he hit the 5th ball over covers for a huge six that sailed into the stands.

A policeman stationed in the crowd tried to catch the ball, as he was flying past over his head in reverse cup style. But ended up hurting his hand as the ball brushed his fingers and went past him and he was left shaking his hand to relief himself of the pain.

Also Read: LSG vs RCB: Watch – Dinesh Karthik Bursts Out In Anger After Missing Back To Back Deliveries The Last Over vs Avesh Khan