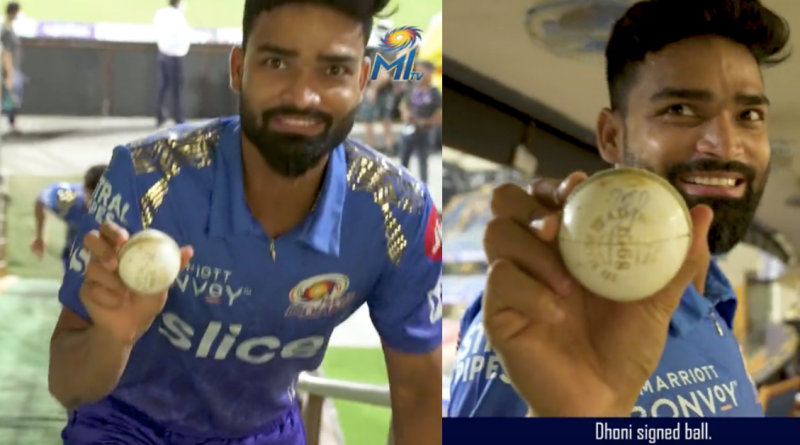 MS Dhoni has made it a point to connect with young players from opposing teams, passing on his wisdom and experience. The number of post-match encounters with the Chennai Super Kings captain has increased since Dhoni retired from international cricket.

MS Dhoni brightened the day of Mumbai Indians spinner Kumar Kartikeya on Thursday by presenting him with a signed match ball. As he climbed up the stairs of the Mumbai dressing room, the 24-year-old from Uttar Pradesh flaunted the match ball from MS Dhoni, displaying his cherished possession in front of the camera.

Last week, Kartikeya was brought in as a replacement for the injured Mohd Arshad Khan. The 24-year-old Uttar Pradesh spinner had played nine first-class matches, 19 List A games, and eight T20s, taking 35, 18 and 9 wickets respectively, and was a member of Mumbai Indians’ net-bowling group. Kartikeya, who had to leave his home when he was a child, struggled to make ends meet as a daily wage labourer.

In their IPL 2022 match against the Mumbai Indians at the Wankhede Stadium on Thursday, Dhoni scored a strong 36 not out, guiding the CSK innings despite losing partners at regular intervals. CSK were bowled out for 97, only the second time in the IPL that they have been bowled out for less than 100 runs.

Dhoni, on the other hand, continued his strong form this season, smashing four boundaries and two sixes. He stayed unbeaten. CSK were formally eliminated though, from the playoff race as a result of their loss.

Also Read: We Identified Rohit Sharma In Early Years As A Person Who Could Be A Possible Captain, He Was Very Mature – Shaun Pollock